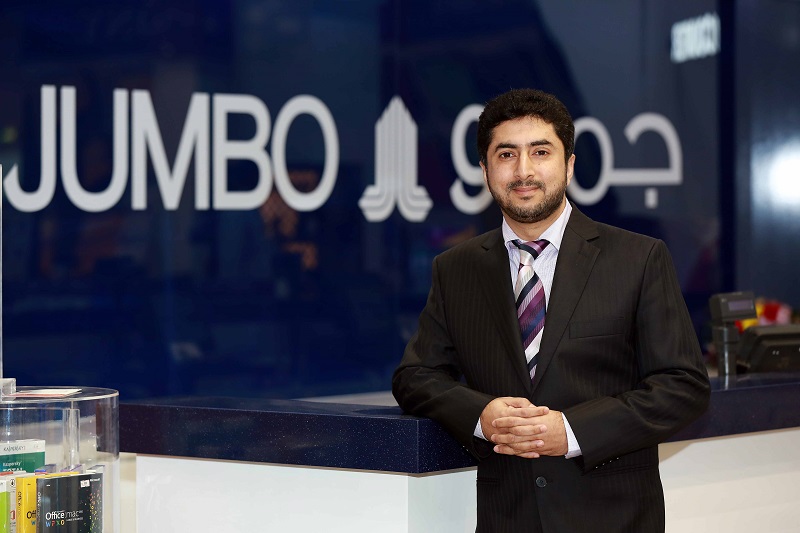 The next big thing in technology is innovation and immersive experiences in AI, AR, VR

In conversation with with Nadeem Khanzadah, Head – OmniChannel Retail, Jumbo Group, he gave us insight about the 2017 market and consumer trend and spoke about the DSF,  VAT which is going implemented from Jan 2018.

As the yearly festival begins on 26 December 2017, the company foresees a flurry of sales ahead of the VAT implementation in 2018 as consumers rush to make last minute purchases. During DSF, Jumbo Electronics is also offering customers half a kilogram of gold every week with its annual promotion #JumboGoldRush.

“With DSF starting during the festive season and a week before the VAT implementation, we are expecting a healthy demand for consumer electronics. We have already seen several shoppers holding back making any major purchases in anticipation of DSF.

“As one of the key sponsors of DSF since its inception, Jumbo Electronics is committed to provide our shoppers with the best promotion and bundle offers. The #JumboGoldRush promotion has been a brand synonymous with DSF and our loyal customers are always looking forward this time of the year with our exciting bundled offers,”

During DSF, customers purchasing products worth AED500 and above at all Jumbo outlets will also get one raffle coupon to enter the lucky draw. In addition to standing a chance to win half a kilogram of gold every week, customers can also win 10 grams of gold every day.

The latest edition of DSF will commence on 26 December and will run until 27 January 2018.

Has there been growth in sales during 2017? Any specific percentage?

Despite the prevailing challenging market conditions, Jumbo Electronics achieved similar sales growth figures in 2017 when compared with the same period last year. Key festivals such as the Dubai Shopping Festival and the Dubai Summer Surprises largely contributed to our overall sales. The two editions of Gitex Shopper, which we have always viewed as another month on the calendar both in terms of sales and marketing, have also continued to bring us a growing base of retail consumers from around the UAE and the region.

Which products witnessed the highest demand for the year?

This year, we have witnessed increasing demand for ultra-large televisions using OLED and QLED technologies as well as Smart TVs, owing to widespread availability of high-speed Internet in the UAE and the rest of the GCC region. The latest television technology such as Sony’s A1 BRAVIA TV with the first ever Acoustic Surface Technology, emitting sound through the screen via waves is currently one of the best sellers in the market with a steady upward sales trend.

Other key categories for sales include smartphones particularly with major launches from Nokia, Samsung, Huawei, LG, Sony and Apple among others. Hero products in the smartphone category were Samsung Galaxy Note 8, Apple iPhone 8, Nokia 8, and Sony Xperia XZ1.

What are the major trends you observed in consumer spending through 2017?

The UAE continues to be an important market for consumer electronics in the Middle East and North Africa due to its strategic position as a regional hub and re-exporter of devices. In addition, the country has always been a launchpad for key product announcements from major brands.

Among the key trends that we have seen influencing consumer spending in the sector are the increased focus on smart technologies and devices across different demographics including the rise in online and mobile services. These trends have contributed in the demand for smartphones and tablets.

There has also been a considerable shift in online purchases for consumer electronics and home appliances, which are the most popular products sold on e-commerce platforms. A growing number of consumers are turning to online retail websites to research prices and descriptions including product reviews by popular gadget blogs before buying products in store.

What do you think is the next big thing in technology?

2018 should be an improvement over 2017 as the region looks to build on where it left off in the previous year. There has also been significant focus on technologies such as Artificial Intelligence (AI), Augmented Reality (AR) and Virtual Reality (VR), due to increasing consumer demand for new sensory experiences. Innovation and immersive experiences are at the forefront of consumer technology, and are some of the biggest factors impacting the latest trends.

The future also belongs to the versatile and the flexible, and cloud technology is demonstrating how relevant it is for customers, as witnessed at the Gitex Shopper Autumn edition. One overarching trend in the consumer electronics industry is the soaring consumer demand for smartphones with more powerful cameras and seamless performance.

As smartphone cameras become more advanced, more data is required in order to save necessary content on devices. Several consumers are turning to cloud storage as reliable back-ups for their content, in the absence of hard capacity such as external hard disks.

In terms of the trend, for example, in the past, the iPhone entry level device initially had only 16GB worth of storage. Today, 64Gb devices have become the entry-level devices and are the norm; jumping straight to 256Gb devices – with no other permutations in between. This is a direct indicator of changing consumer needs; today’s customer wants more physical data to be available on their phones.

In addition, there will be an increased demand on smart homes appliances with AI technologies as well as top-of-the-line noise cancelling wireless headphones and speakers from leading brands. We will also continue to see further increase in the popularity of wearable technologies, drones, and high-end gaming products.

How is Jumbo preparing for VAT?

Many organisations, Jumbo included, are approaching VAT as an important business transformation project that will positively impact the industry and economy in the long term. Like every other organisation in the UAE, we are currently focused on getting our systems and procedures in place ahead of the expected date of implementation in Jan 2018. We expect that the first few months will be challenging as the industry and consumers adapt to the new norm, but Dubai’s draw as a hub for major international retail brands will majorly contribute to riding our any initial bottlenecks.

What impact do you expect VAT to have on your business?

We expect that the first six months could be challenging for businesses but over a period of time, we expect it to stabilise as both consumers and operators become familiar with VAT. We are not expecting any major negative impact on our sales from VAT, as consumers who want to make purchases will continue to buy, with or without VAT. It is important to note that the proposed five per cent rate will be among the lowest standard rate in the world.  Standard VAT rates vary across the world with 10 per cent in Australia and even more than 20 per cent in some European markets. So, we are still very much competitive as a retail destination compared to many other parts of the world.

How ready is the company for the roll-out date, which is currently 1st January?

We have been working towards getting VAT ready since the start of the year and operationally, we are well on track to being fully prepared for the date of implementation in January 2018. We are also expecting a flurry of sales ahead of the VAT implementation date as consumers rush to make last minute purchases before the new laws come into effect, so we are preparing for a busy end of year season.

“Digital is growing at an exponential rate in the Middle East in comparison to anywhere else in the world ” says Taro Kimura, Managing Director, Sony Middle East & Africa