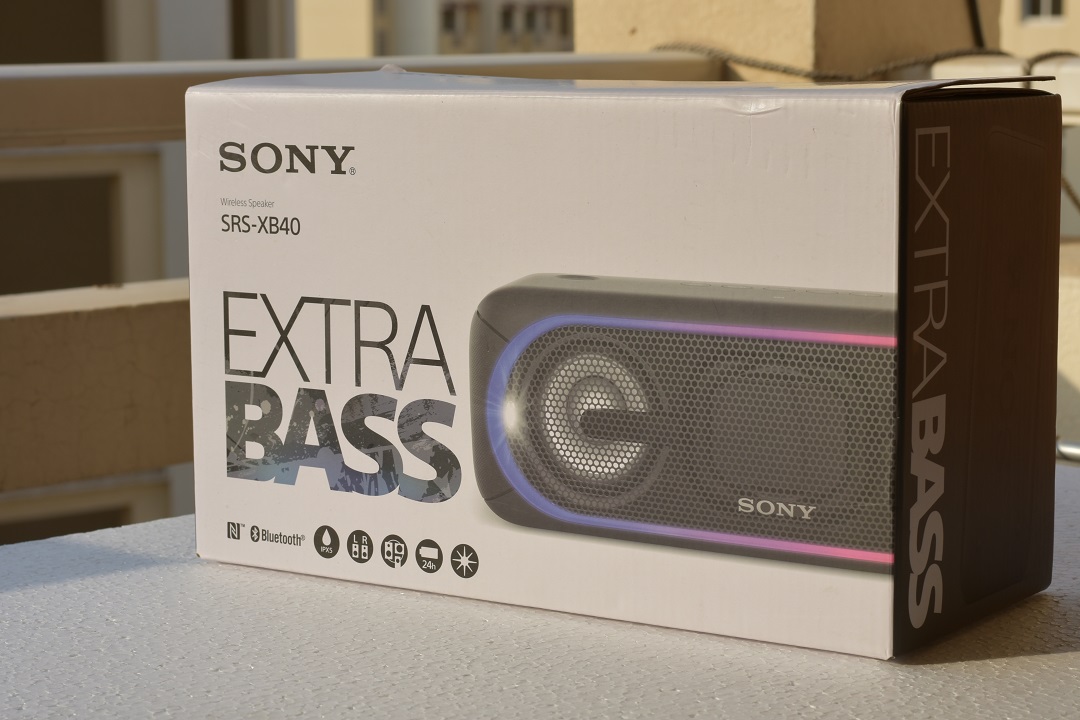 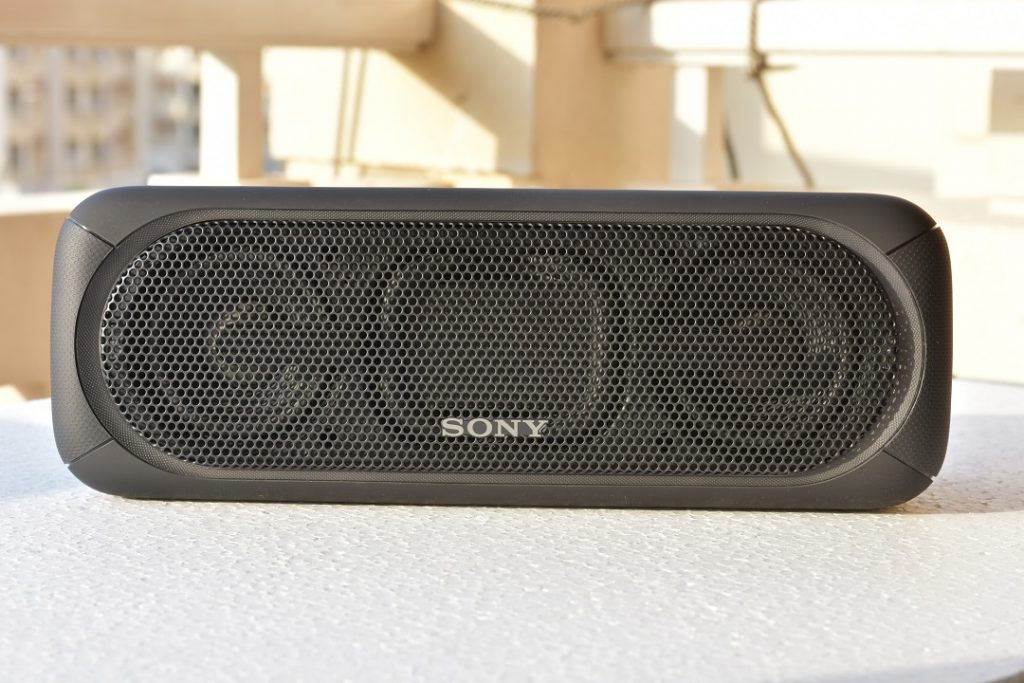 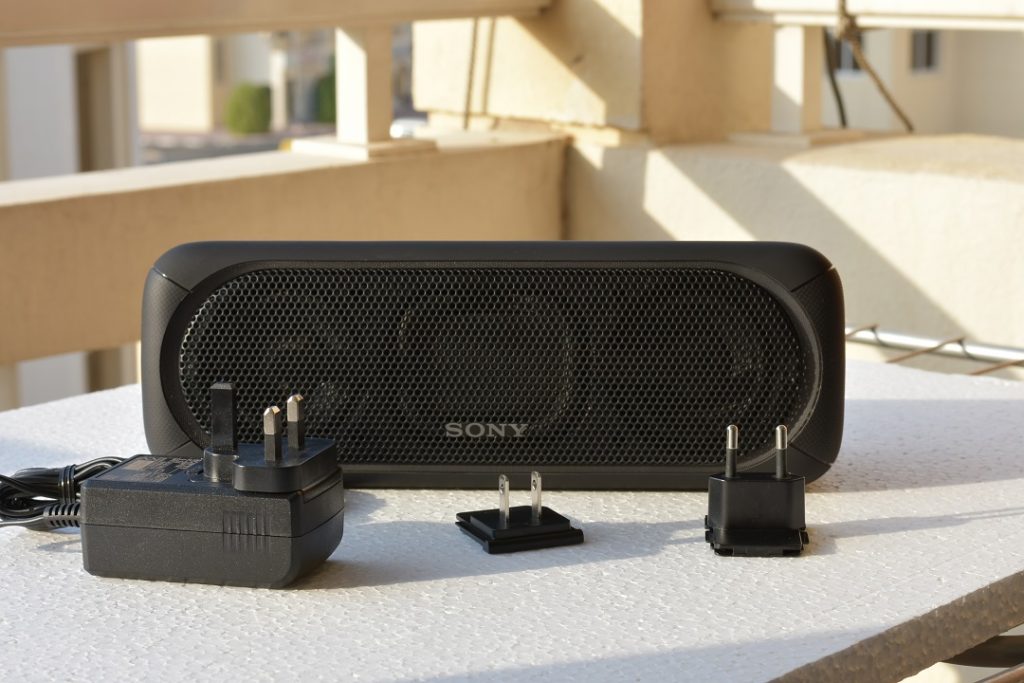 The Sony SRS-XB40 speaker features a traditional oblong bar shape of wireless speakers with its audio drivers facing one direction but the speaker can be paired with other Sony Bluetooth speakers to either amplify sound or to play in stereo. It is 279 x 100 x 105mm (W x H x D) is size and weighs around 1.5kgs. The body is made of hard plastic with silicone rubber covering. is rated IPX5 for water resistance against moderate pressure from jets, provided the cap covering the connections panel is closed. Available in matte black, blue, or red plastic. Behind the grille, dual 2.5-inch drivers deliver the audio with the help of forwarding and rear-firing passive radiator to enhance bass response. There is a ring around the grille on the front of the speaker that lights up – the Sony SRS-XB40 provides a light show that syncs up with your music. 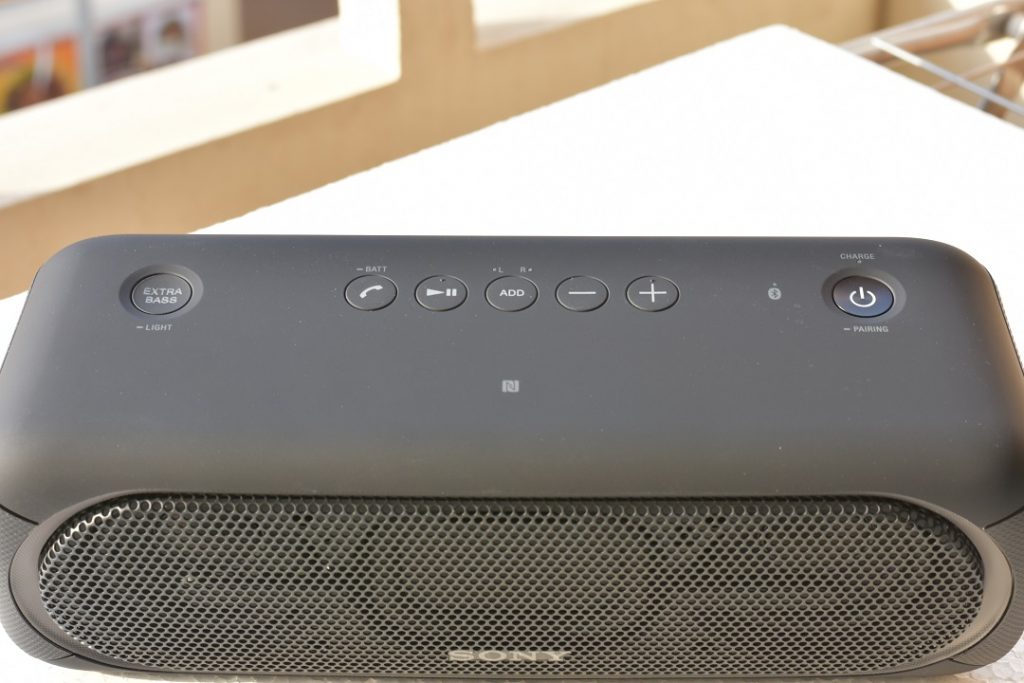 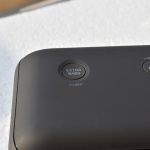 All the control of the speakers is on the top panel. From left to right, these include Extra Bass, Phone Answer/End (which doubles as a battery life indicator), Play/Pause, add (to create a stereo pair with another SRS-XB40 speaker), Volume Down and Up (these work in conjunction with your mobile device’s master volume levels), and a Power/Pairing button. A covered rear connection panel houses the 3.5mm Aux input, a pinhole Reset button, the AC adaptor connection, and a USB port for charging your mobile devices using the speaker’s battery. While not fully waterproof, the SRS-XB40 features IPX5 water resistance. This means the speaker will survive splashes but you won’t want to dunk it in the pool. 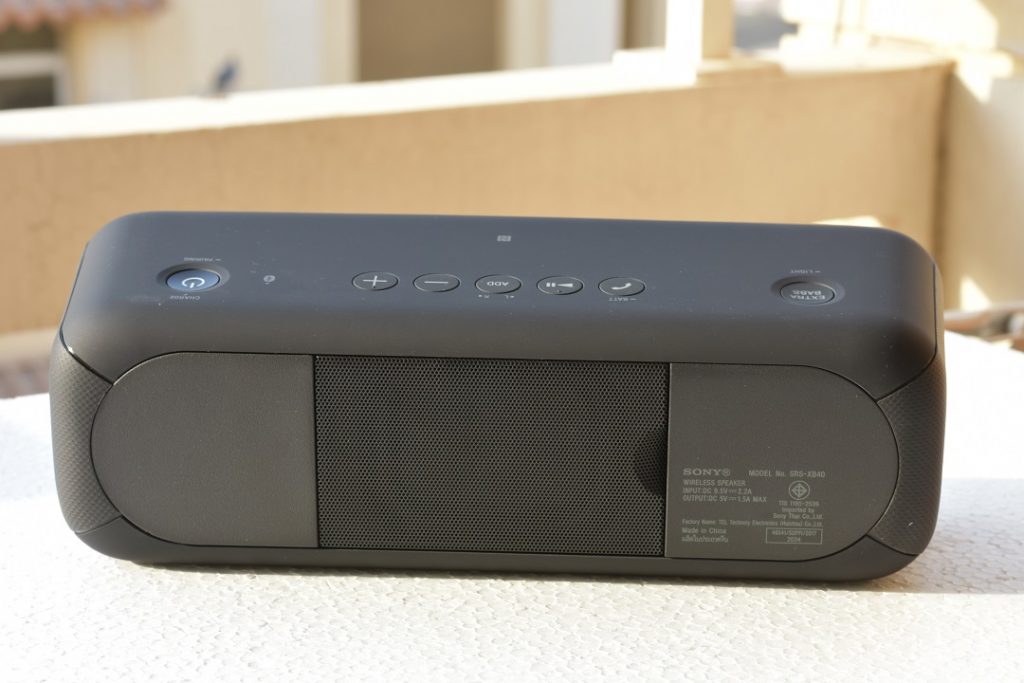 I have certain songs and sound testing music which I always use to review any kind of sound system from portable speakers to home theatre sound system. The Sony SRS-XB40 speaker was tested on a lower and higher sound level. On the lower sound level, the SRS-XB40 performed very well, especially with the Extra Bass on. The Sony SRS-XB40 is a directional speaker and would enjoy the music by facing the speaker. The SRS-XB40 speaker sounded great and could hear each cymbal and high-frequency sound. While the bass sound was average and was a little muddy. I was missing the thump and rumbles and especially on very low notes. 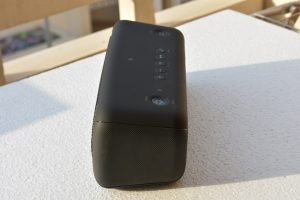 When the volume was increased to maximum, the music was loud but not appealing to the ears and felt just a blaring noise for the party. Personally, I would prefer to listen on lower or half volume range to enjoy music on the Sony SRS-XB40.
I wish Sony would have given me another set of Sony SRS-XB40 speakers to pair and use it like left and right channel. Sony says that using the wireless party chain, speakers can be connected to each other to enable users to enjoy a performance featuring synchronized lights and great sound up to 10 units can be interconnected via Bluetooth®.
Another small issue I faced for the first time was the Bluetooth connective as there was a drop of sound on certain intervals which was rectified by resetting the speaker from the back panel reset pinhole. 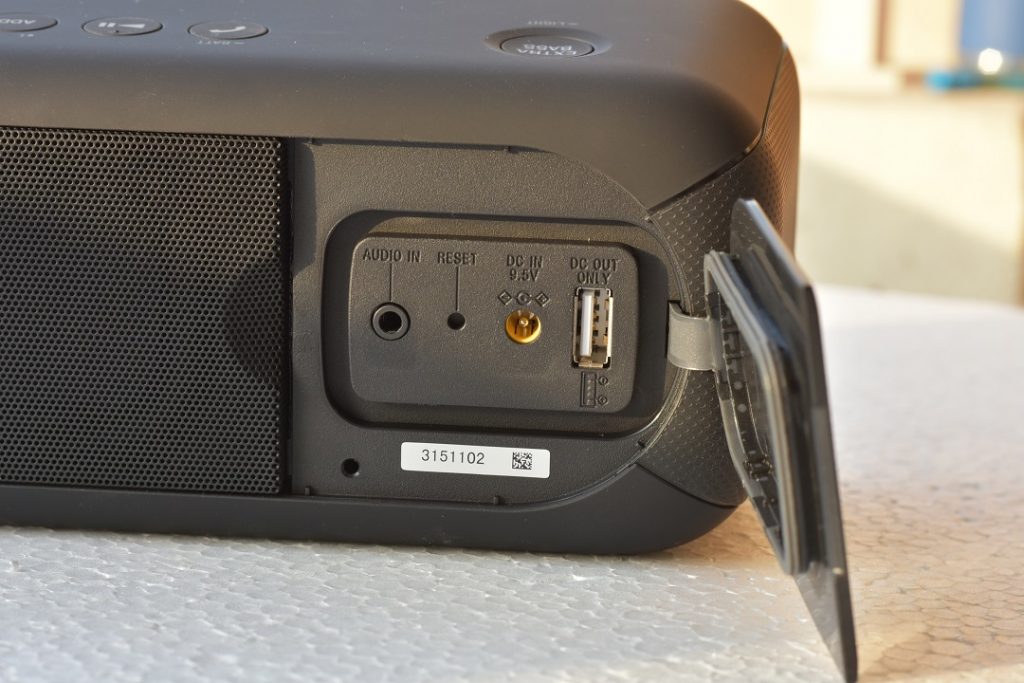 The Li-ion 5400mAh battery lasted for more than 4 days with the usage for 2-4 hours in a day. When trying to receive telephone calls via Bluetooth, the speaker was good and loud but the speakerphone mic is not powerful, I had to be close to the speaker unit to speak to the caller.
Another good feature is that you can recharge a smartphone by connecting it to the USB-A port on these devices via a USB cable which enables the speaker battery for recharging my smartphone.
The SRS-XB40 allow multi-device connectivity, meaning that more than one smartphone can be connected at the same time, enabling the user to quickly switch between music sources. 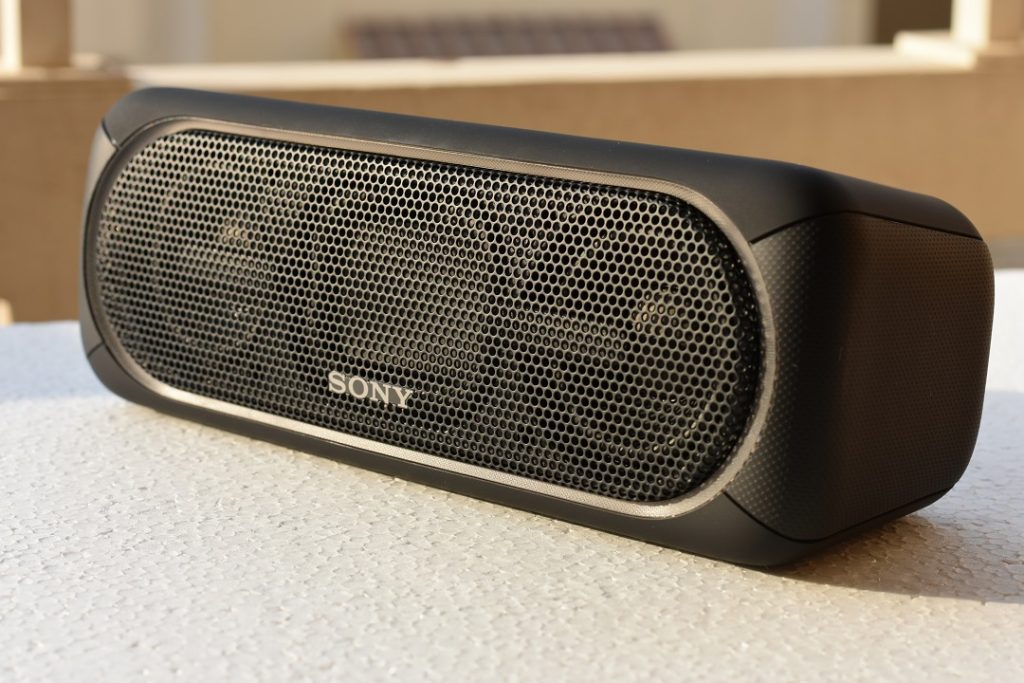 The portable Sony SRS – XB40 would good for the people who love the loud sound and booming bass (not for audiophile listeners) and who love flashing LED lights and it is a water-resistant design (splash proof – is rated IPX5). The Extra Bass button makes sense on a lower volume but it does have not crisp clear bass but has good sound on Mids and Trebles. Long battery life with USB-A charging for your smartphone while you are outside and not near any electric socket. Easy way to pair your smartphone with Bluetooth and NFC phones. Little bulky (1.5kg) to carry on your backpack but loud enough for a group of people to enjoy music and pairing up multiple Sony speakers. I wish could have been less expensive on the pocket. 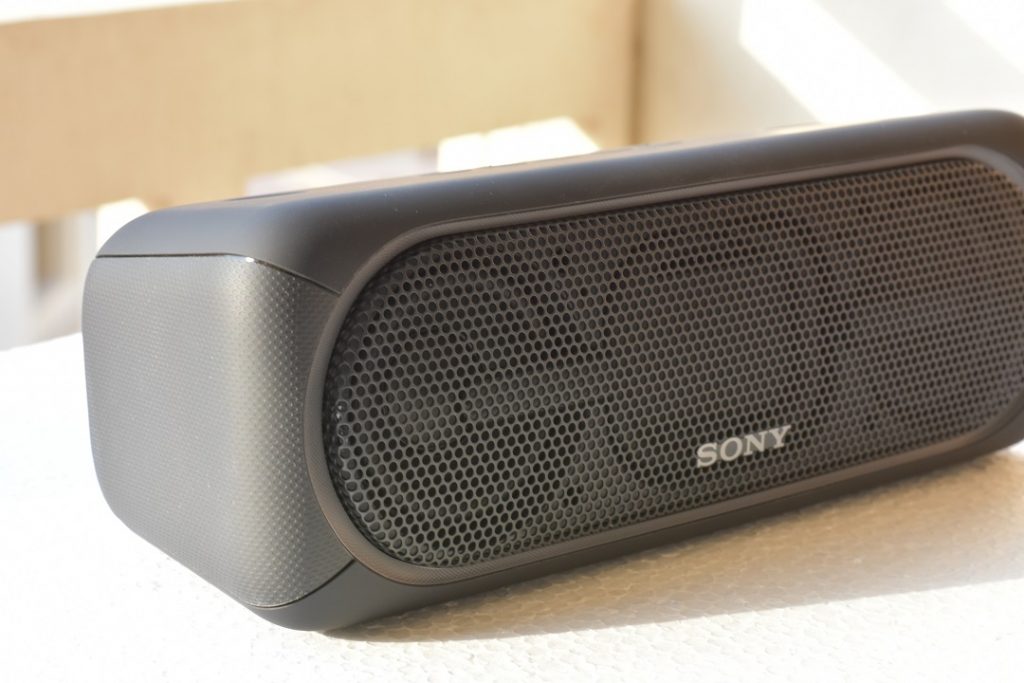 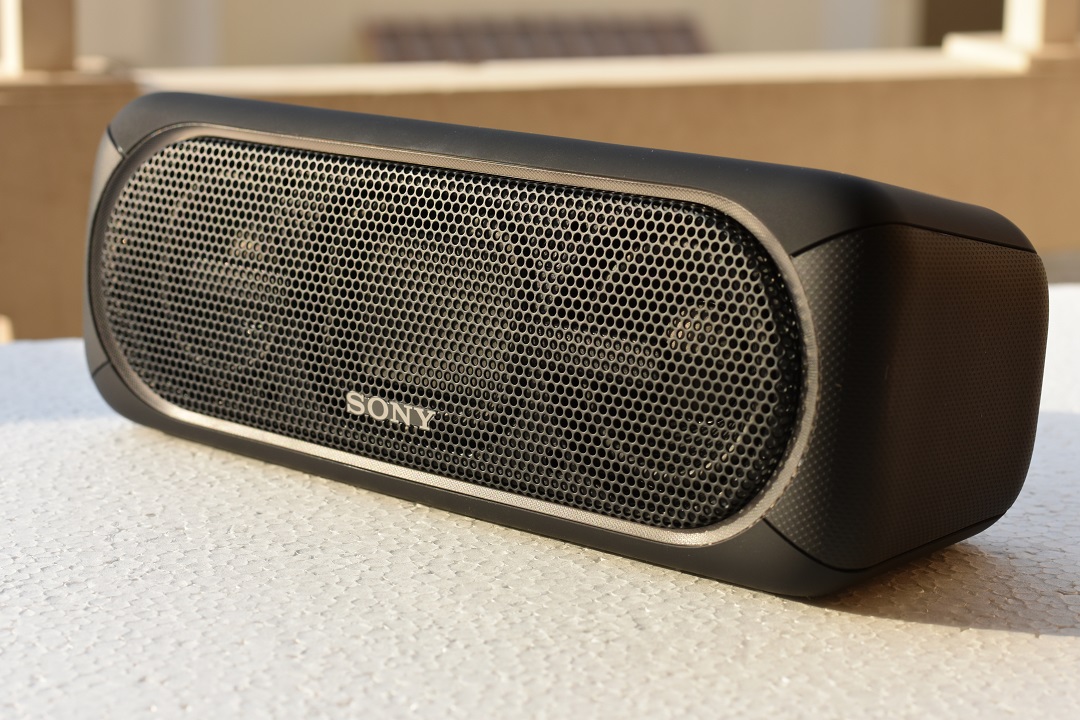