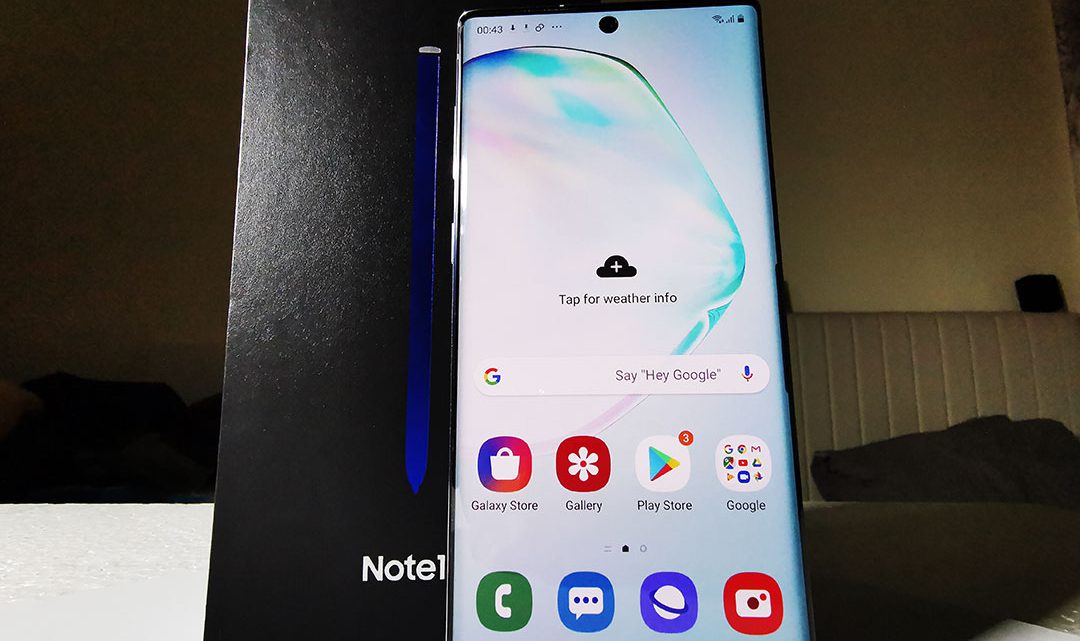 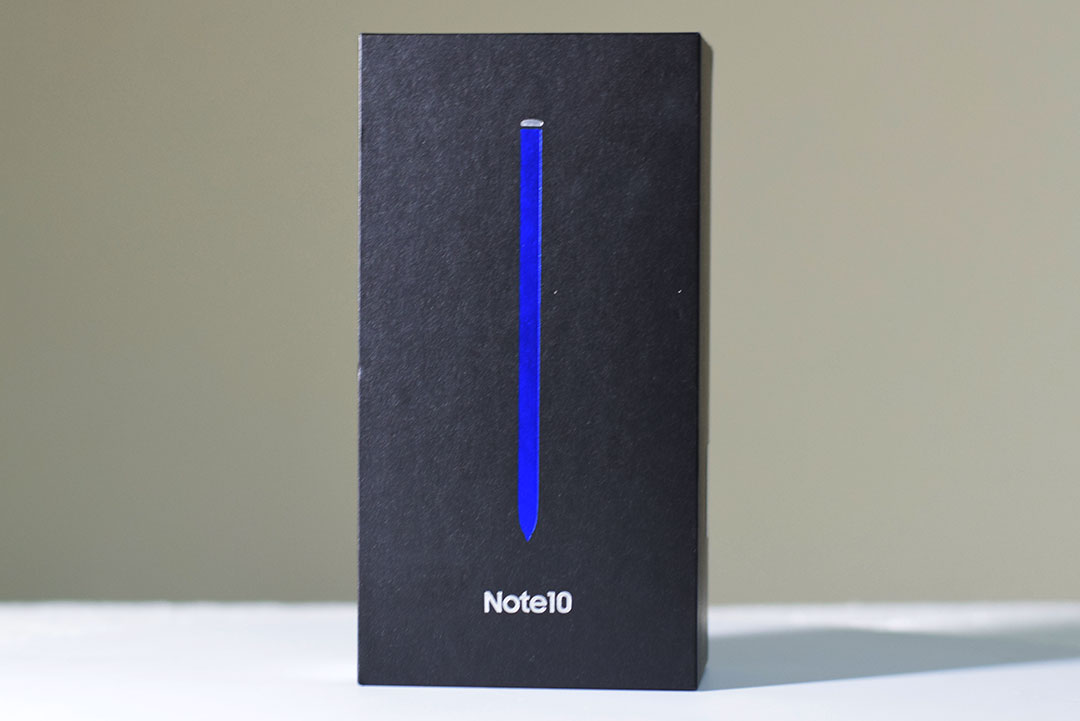 Samsung Gulf Electronics today announced the latest addition to its premium Note series with Galaxy Note10, during an event held at Madinat Jumeirah, Dubai.
The Samsung Middle East released 4 variants of the Galaxy Note 10 series of smartphone for UAE market. 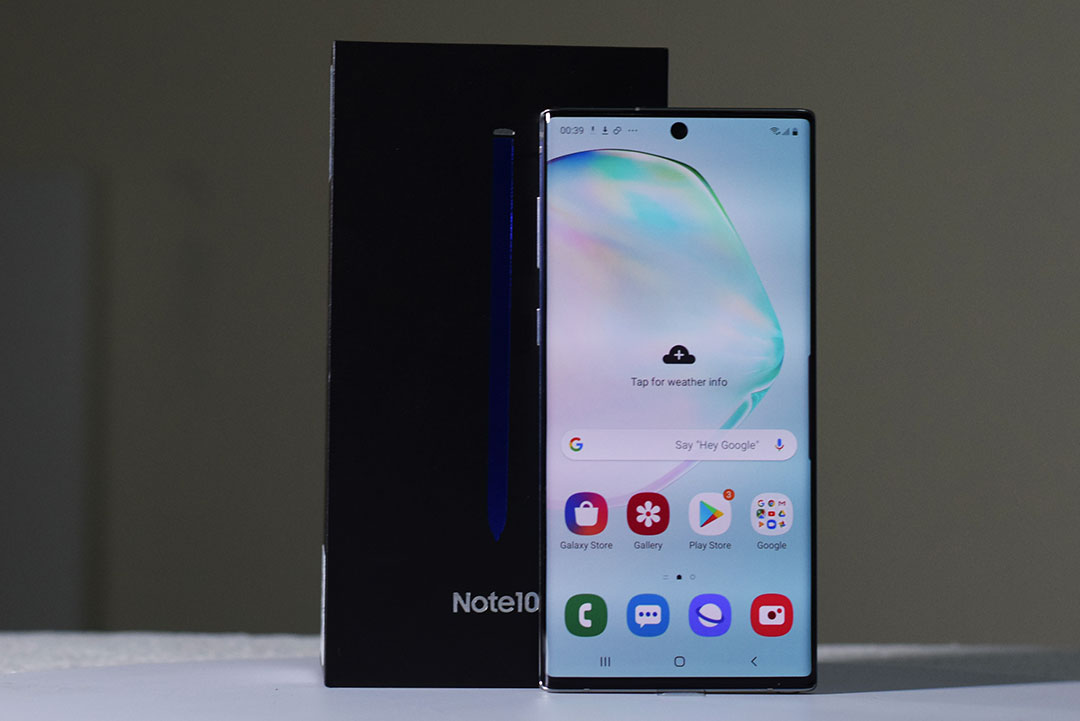 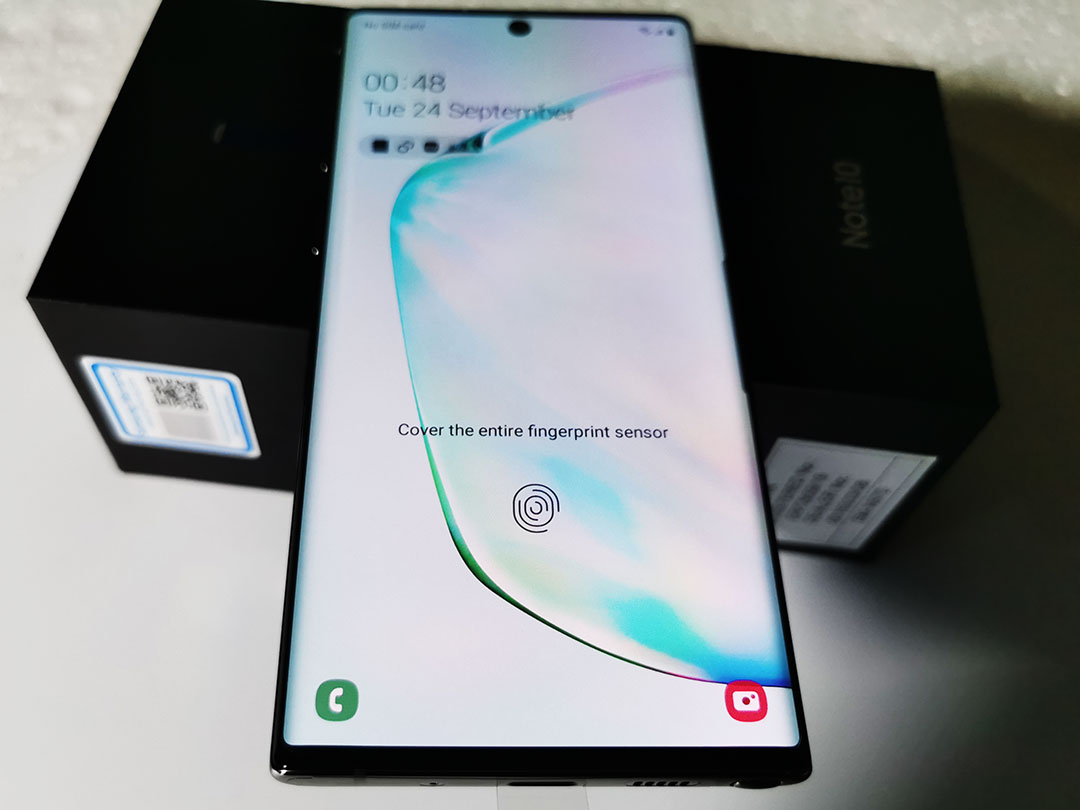 The Note 10 display includes the Ultrasonic Fingerprint Scanner that reads the 3D contours of your physical thumbprint. As mentioned by Samsung, the fingerprint sensor has the world’s first FIDO Alliance Biometrics Component certification, this next generation biometrics authentication offers vault-like security to keep your device safe. This was first introduced in the Samsung S 10 series of smartphones. 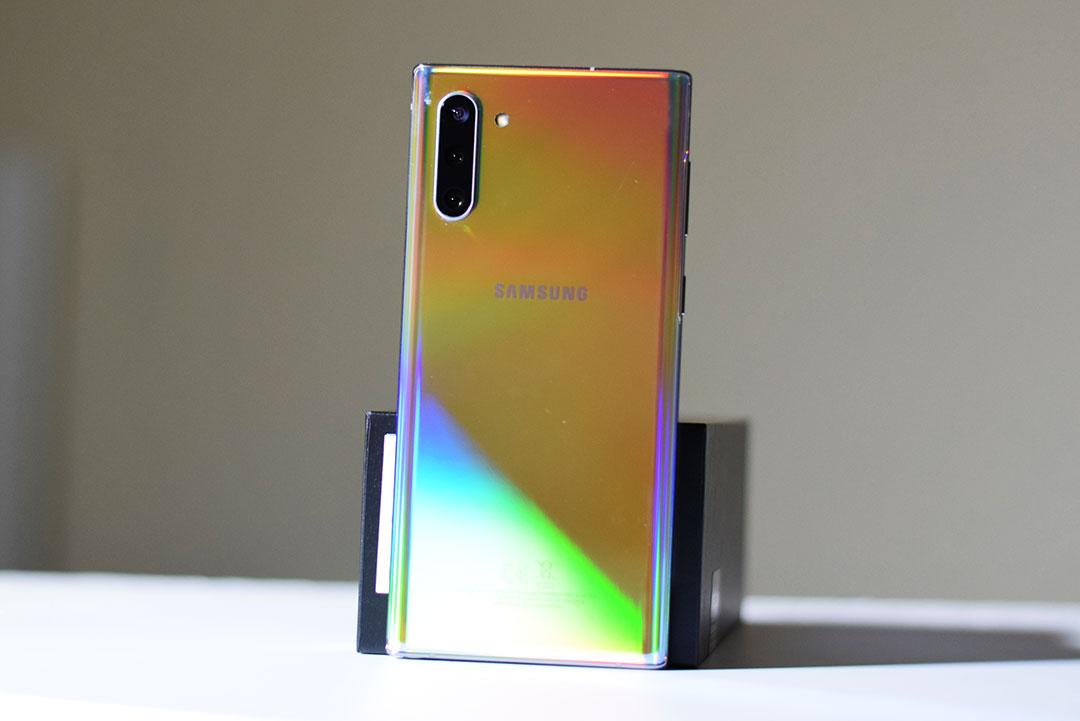 The review unit I have received has the back panel Aura Glow finish which is very sleek and stylish and as the panel has multi-colour when holding against any light. The finger smudges easily have visible on the back panel.
The back panel has the Triple camera which is housed in a little bevelled rectangular rounded edges with rim panel and the cameras placed in a straight line with the LED flash on the extreme right. 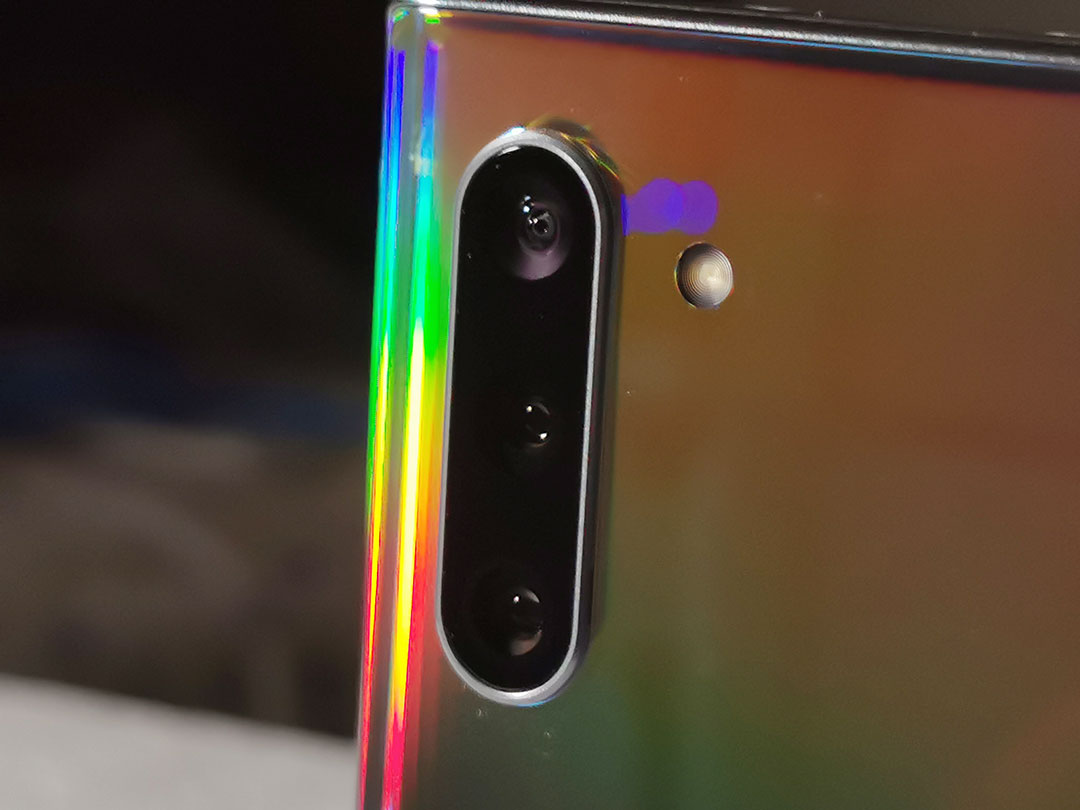 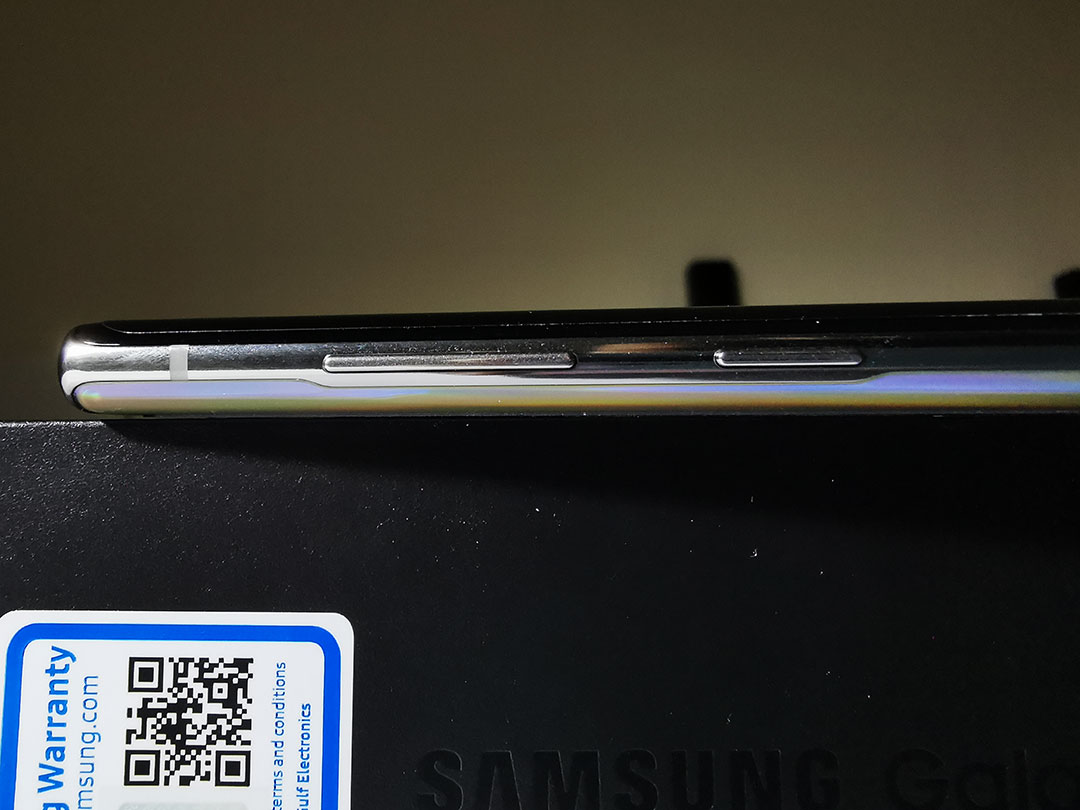 The sides of the device are steel grey with the power button and the volume rockers on the left-hand side and no buttons on the right-hand side. 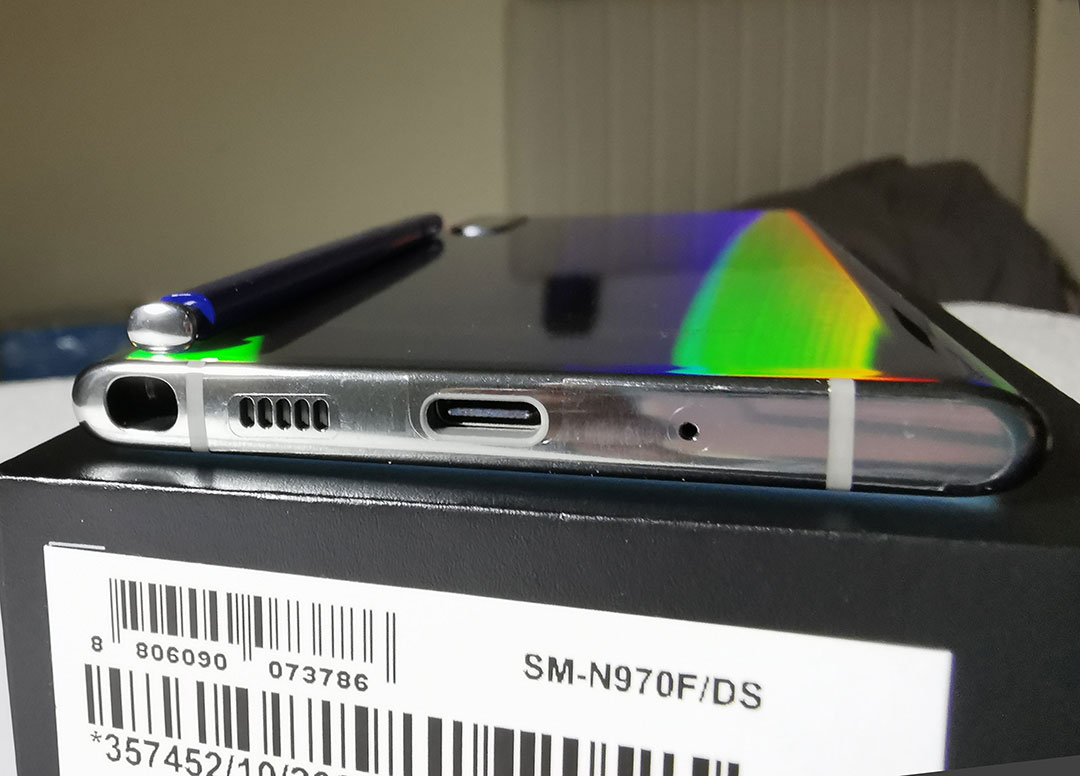 The bottom side we have the USB type C charging pin, speaker grill and S Pen Slot. 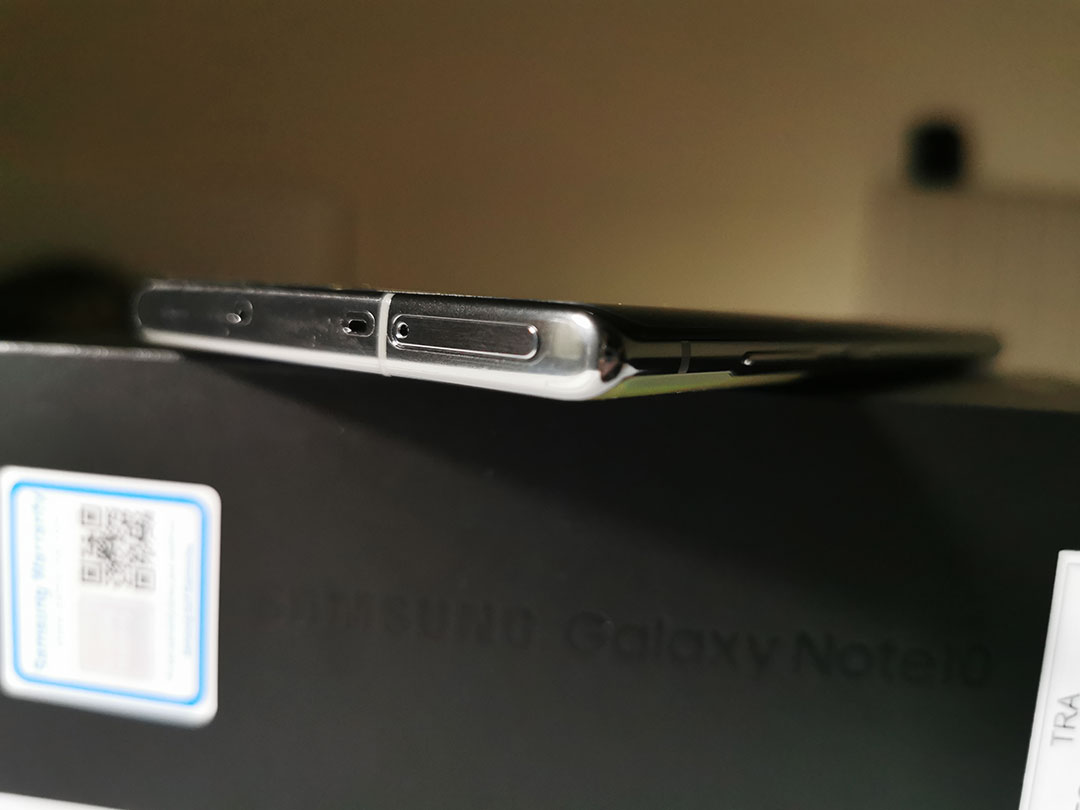 The top side has the Dual SIM tray which can also use one of the trays for MicroSD card.

It has the latest Android Pie (9.0) for OS and One 1.1 for User Interface.
The Samsung Galaxy Note 10 is IP68-rated for water-resistance and boasts Qi wireless charging and has NFC, MST which can be used for payment with Samsung Pay or any compatible banking payment system. 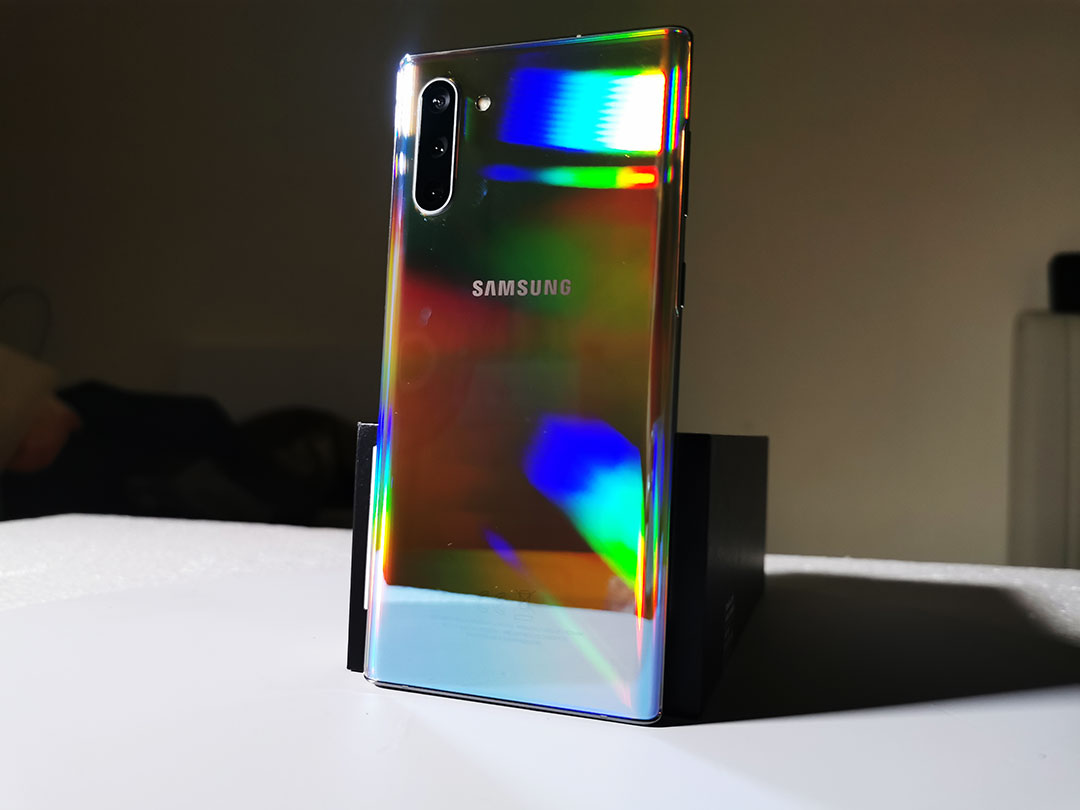 The Samsung Galaxy Note 10 as design-wise is a classy, sleek-looking smartphone which can be used by any kind of consumer from corporate to a teenager who can afford it. As we are all aware most of the Arabs love white colour, the Note 10 series has 3 colours Aura Glow, Aura Black and Aura white. The Aura Glow as it is shiny and has multi-colour back panel when light falls on the smartphone, it can appeal to the younger generation and people who would like to stand out different in the crowd. 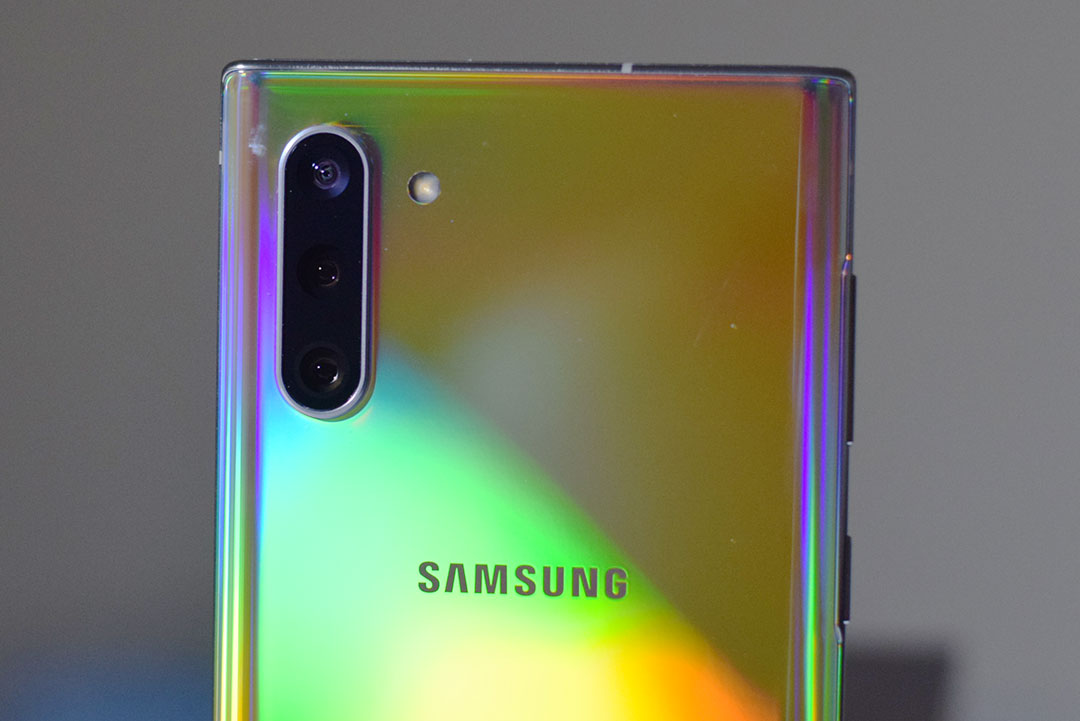 With the triple camera set up on the back panel, you can click 123-degree wide-angle photographs, so now you can click a group of people from a close distance or capture the panoramic view of the landscape. With Al feature in the camera, the camera app also includes a Scene Optimizer with 10 new subjects.
Another feature which I like in the camera app after the image is taken, you click on the “Details” to see the size, categories, aperture, focal length, ISO, Exposure time.

The camera app has 3 presets, Wide-angle, 1x and 2x and at these 3 levels photographs were good but as you increase to further than 2x and max to 10x zoom the quality of the image deteriorates. 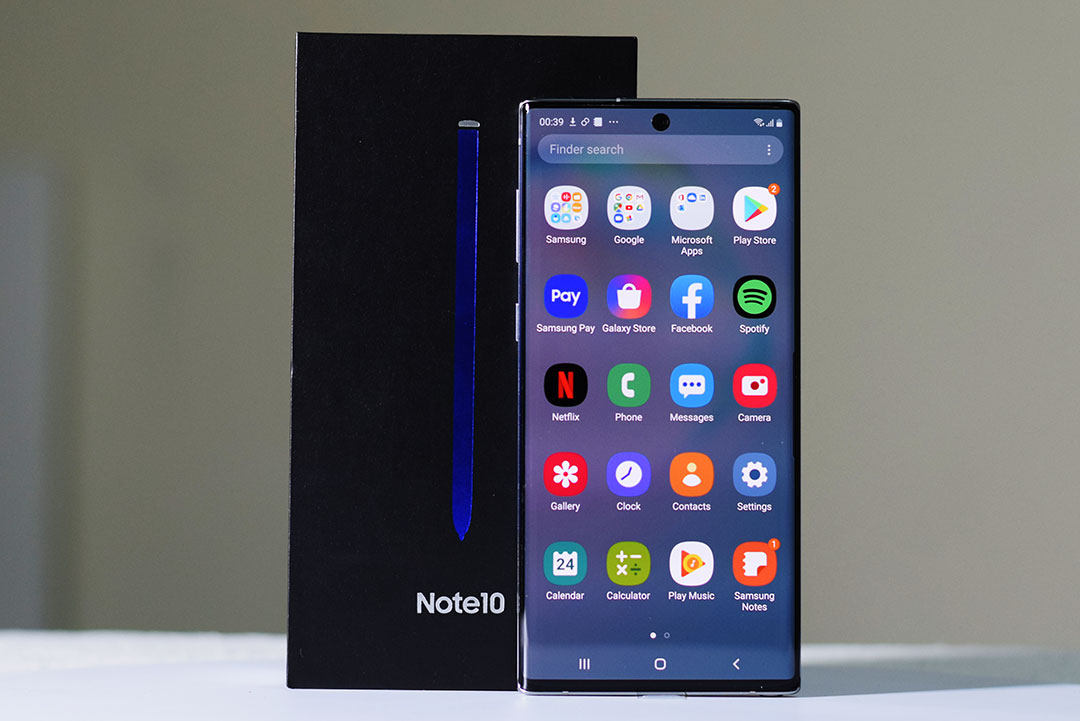 In the daylight, the cameras performed very well but in the low light photography as there was a little noise in the images and especially when you zooming to look for details. Also the certain time I felt there was an artificial colour correction to make the image look brighter and compared to the actual environment. Some smartphone users appreciate this correction of brightening of images.

In video mode, the camera performed very well at the 3 preset levels in daylight but in a low light similar issue as mentioned above for photography. You can shoot 2160p@30/60fps, 1080p@30/60/240fps, 720p@960fps, HDR10+. You can record dual-video rec. you can now get Bokeh effect (background blurring) while shooting video with the main camera.

Another issue which I always had with Samsung devices is the heating up, if you are using the Camera App for longtime or especially video mode, the body especially the back panel gets quite warm and you can feel the heat on your fingers. But Samsung Note 10 performed well on this issue, looks like as mentioned by Samsung during the launch about adding vapour chamber cooling system has worked. There was little heat but it was around 33° to 35° which is quite common on long usage of the camera app. 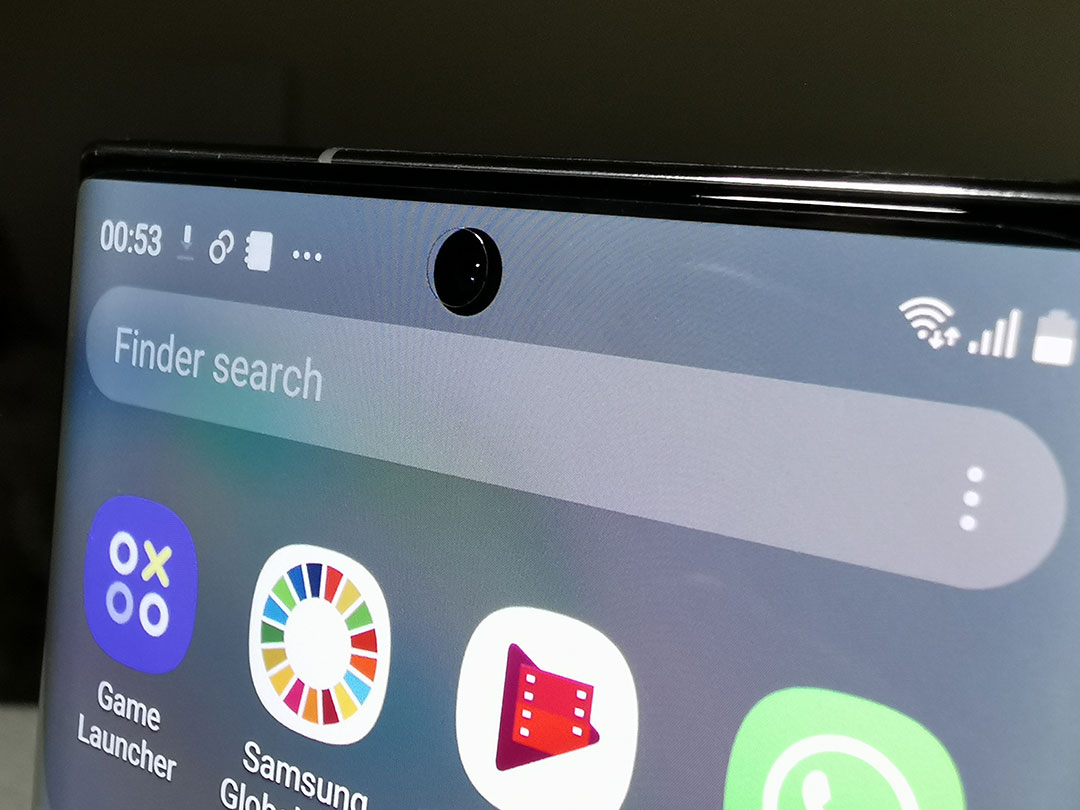 As for the front (selfie) camera, the single-lens 10 MP, f/2.2, 26mm (wide) camera performed very well and the Bokeh effect was amazing. The focus was quite fast and it has 2 presets – 1x and wide-angle. The front camera also has Ai support and automatically suggest the exposure. You can record 2160p@30fps, 1080p@30fps with Ai support and can get Boken effect while clicking a selfie.

Samsung Note 10 makes already smart features more accurate with a Neural Processing Unit (NPU). And with Shot Suggestion, Galaxy Note 10 offers automatic composition recommendations so you can frame your photo better than ever.

The Samsung Note 10 has Dolby Atmos and you can experience it with using the AKG Earbud headphones which have the USB Type C pin and comes along the package. The speakers in the smartphone are quite good and give stereo sound when you hold it horizontally. 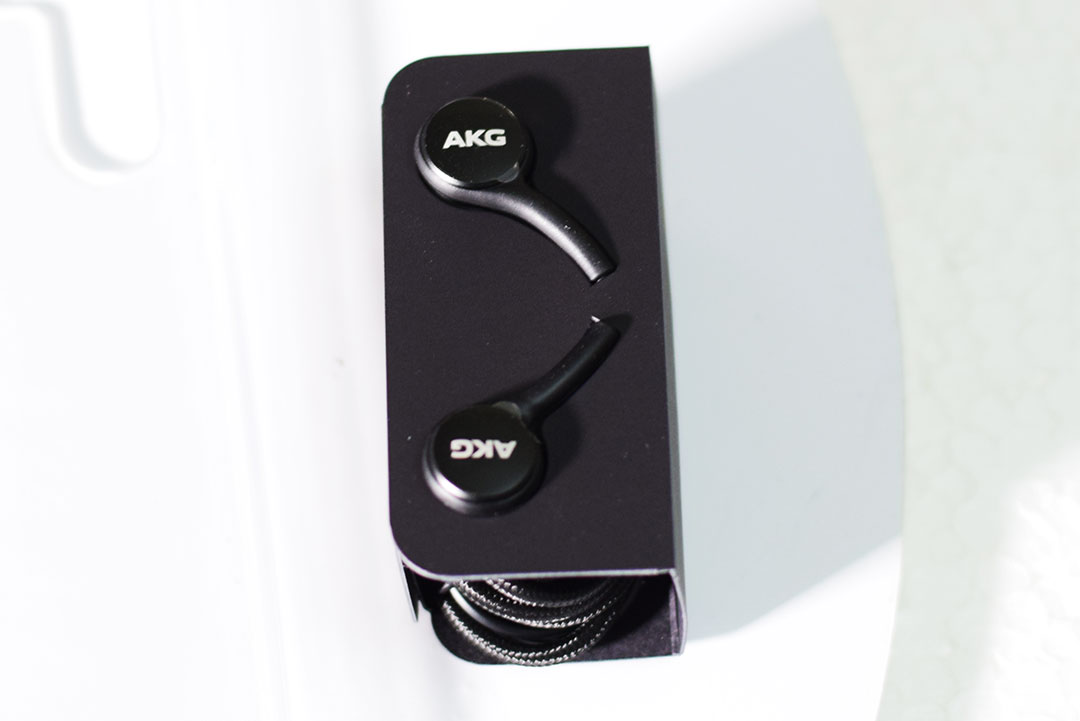 Honestly, the AKG earbuds Hi’s, Mids sound quality is really good but lacked in good quality rounded rumble bass maybe I got used to the AKG headphone which I used in the Samsung S10+ “Ultimate Performance Edition” which were awesome. But weight-wise and wearing them were light so you don’t feel them on your ear.

With the Android 9.0, OS and recently released One UI, the new AI software on the Note 10 series automatically optimizes battery, CPU, RAM, and even device temperature based on how you use your phone and continues to learn and get better over time. Leveraging AI-capabilities, Note 10 also learns how you use your device to launch your most frequently used apps faster.
With the 8GB RAM, latest Snapdragon 855 chipset, Android Pie, Note 10 performance was amazing and while testing on different benchmarks, it scored quite high. 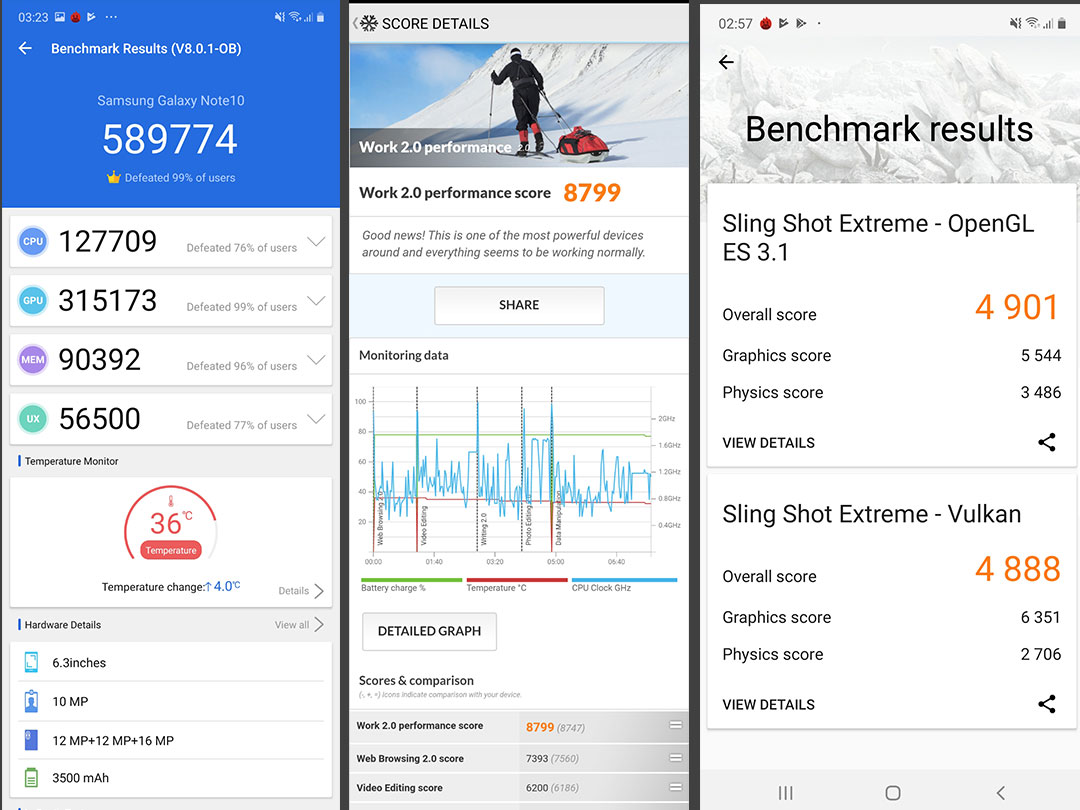 The Samsung Galaxy Note 10 was tested under 3 different benchmarks a) AnTuTu – 589774 b) PCMark – 8799 c) 3Dmark – Sling Shot Extreme – Open GL ES 3.1- 4901 & Sling Shot Extreme- Vulkan – 4888.
During the benchmark test, the smartphone heated up to 36 degrees and under stress test and looks like the new vapour chamber cooling system worked well.
There is was no lag or delay in the graphics performance of the device and every game I tested like Asphalt, War Wings, KillShot worked with ease.
So I presume Samsung tech team heard the Samsung consumer’s cries and sorted out the heating issue and appreciate it. 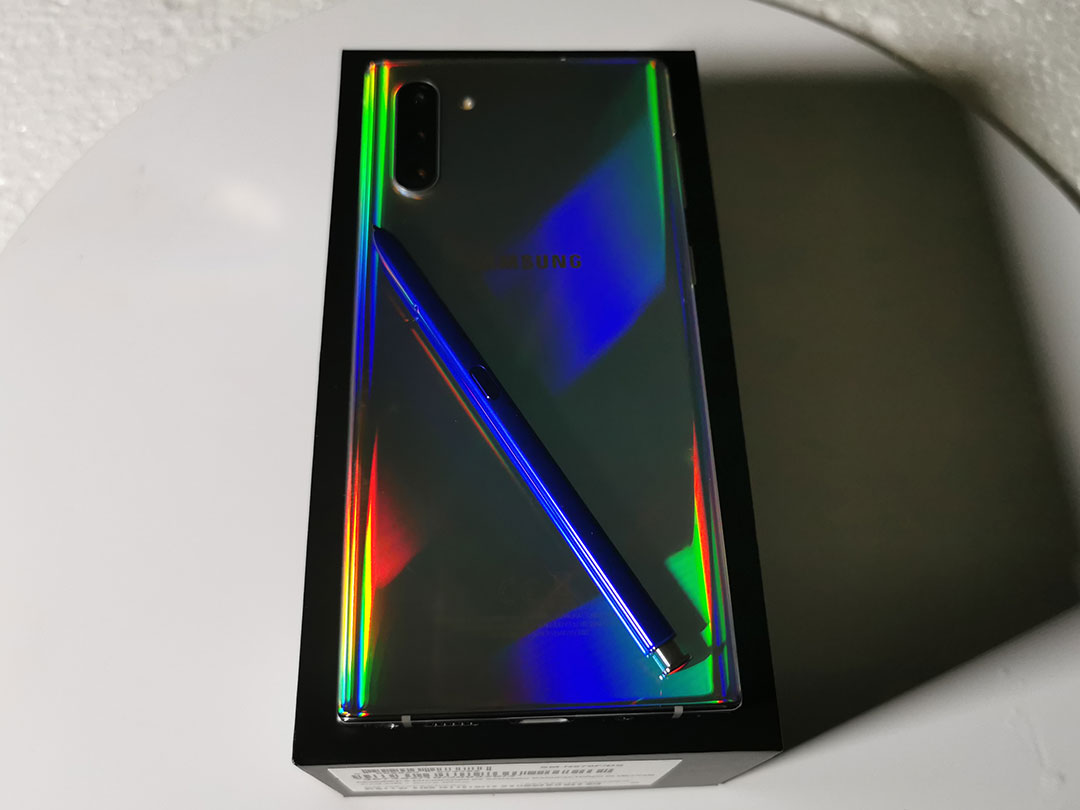 Since the first launch of the S Pen in the Note Series, it has improved and advanced a lot compared to the earlier version. The S Pen has been a useful handy and style statement for the Samsung Note users. The new improved S Pen has a lot of things to say like the handwriting to text conversion, my handwriting is horrible and I always considered computers a boon for me. I was little unsure about this handwriting converting to text but when I tried and it worked. There were minor issues with certain alphabets but on repeat trying, the device understood my style and later got almost all the text character correct. 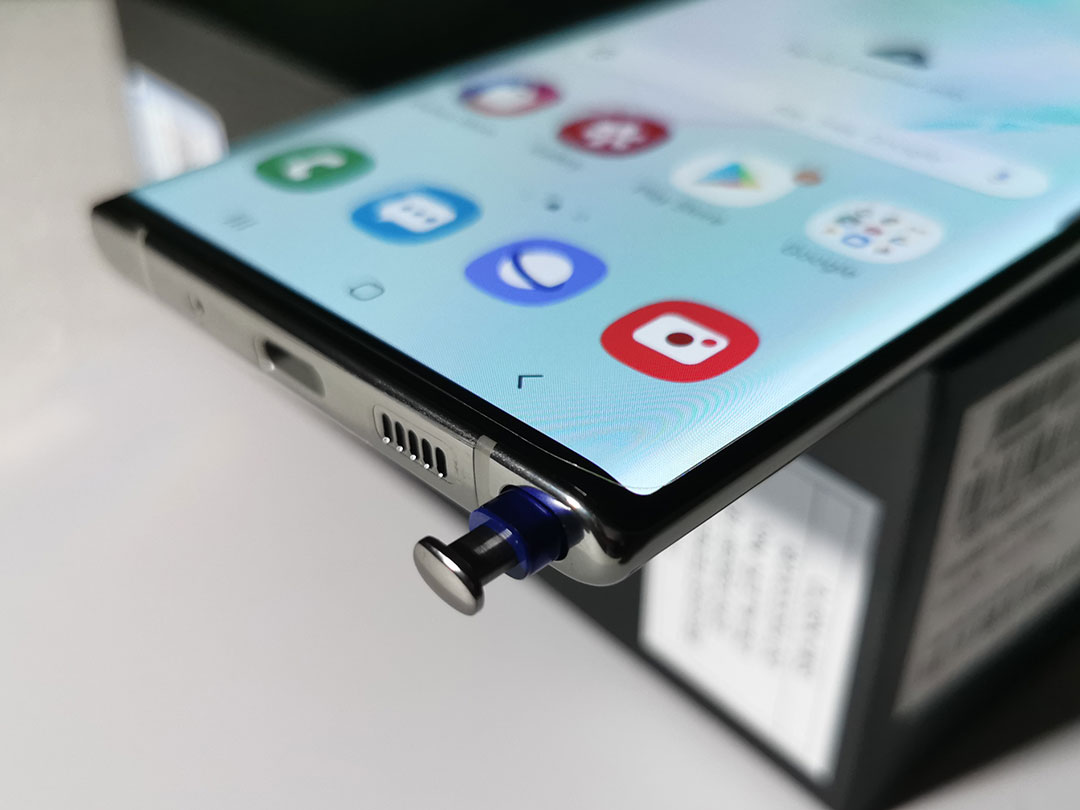 Another cool feature was to write on the closed screen for urgent notes and then the air actions functions with gestures were neat.

With S Pen and hand wave gestures, you can change the camera mode from front to main cameras or zoom in or zoom out and even using the S Pen to capture an image from a distance. This one should appeal to the consumer who loves taking long shot images of themselves without anyone help, just a tripod and the Samsung Note 10.
Thanks to S Pen, you click an image in Night shot mode without touching the smartphone on a tripod.

Security and other supports 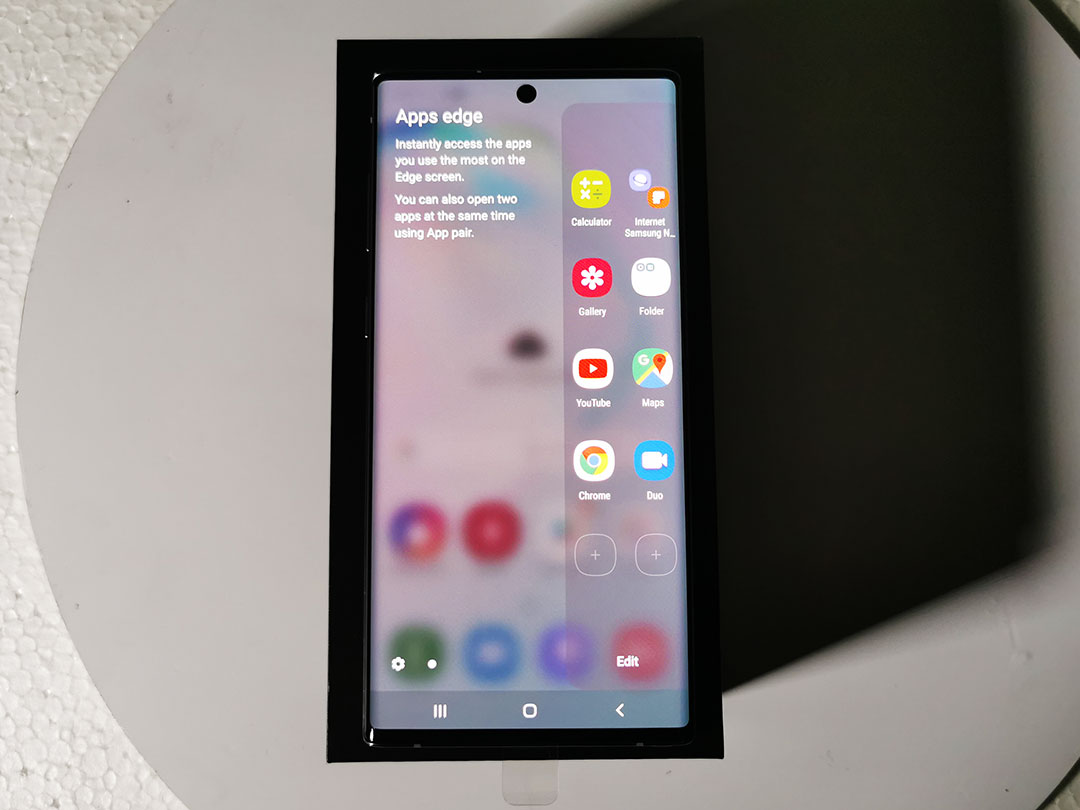 Samsung Note 10 comes with very own Knox platform that encrypts data to keep from prying eyes. Other than face recognition, pattern, pin and Samsung Note 10 comes with the display the Ultrasonic Fingerprint Scanner that reads the 3D contours of your physical thumbprint. As mentioned by Samsung, the fingerprint sensor has the world’s first FIDO Alliance Biometrics Component certification, this next generation biometrics authentication offers vault-like security to keep your device safe.
It has got its own Bixby automates your routines and provides personalized recommendations to make your life easier. With pre-set and personalized routines, such as Driving and Before Bed routines, which are customized based on your habits.
It comes with Samsung Health, Samsung Pay and Samsung DeX and has 30W Fast Wireless Charging.
It has got Wireless PowerShare, making it possible to easily charge Qi-certified smartphones and even compatible wearable devices. Besides, Samsung Note 10 is capable of charging itself and a second device simultaneously via Wireless PowerShares 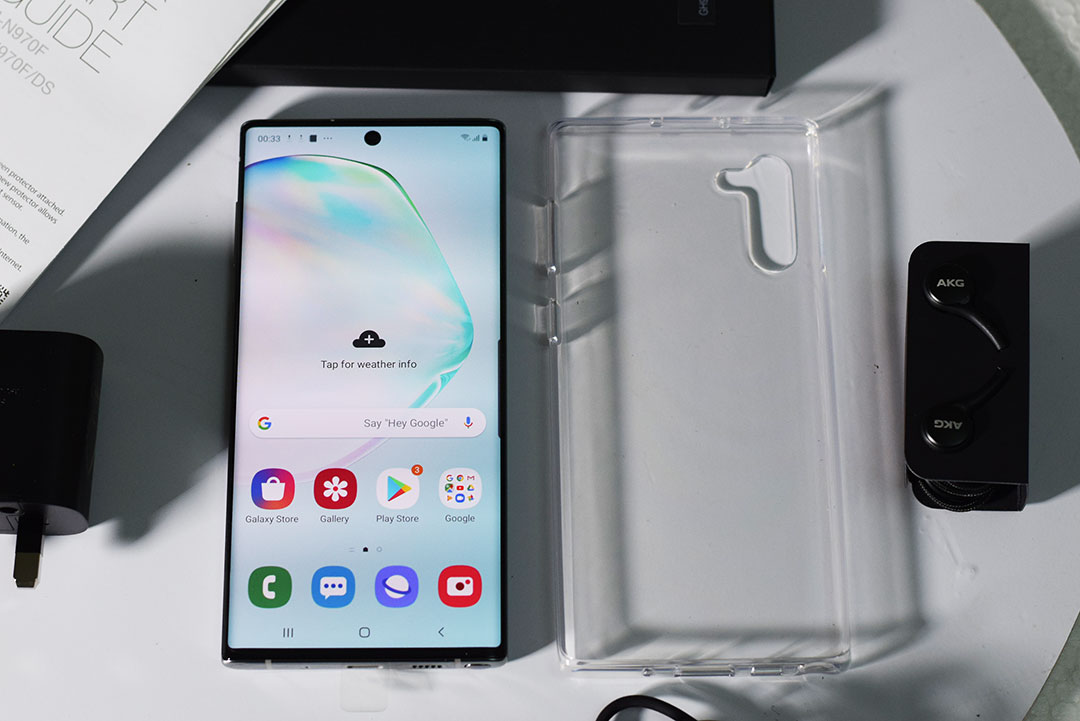 Samsung Note 10 is a great device with power horse performance and with 8GB RAM, you are future-ready for any kind of heavy graphics oriented games or software. The 256GB ROM/ Storage is quite a lot but you still want more storage space you add microSD card in one of the Dual SIM card slots. So much so can work on your Heavy presentation and save heavy videos files with the help of Samsung DeX and nothing to worry about space or performance.
The camera performance is daylight was great but failed to impress me in the low light photography was with noise. But the Bokeh effect during the video recording was good.

The design and style are the top-notch and perfect smartphone for all the genders to use. But overall it is a great product for people who can afford to buy.

Who should be buying Samsung Note 10? 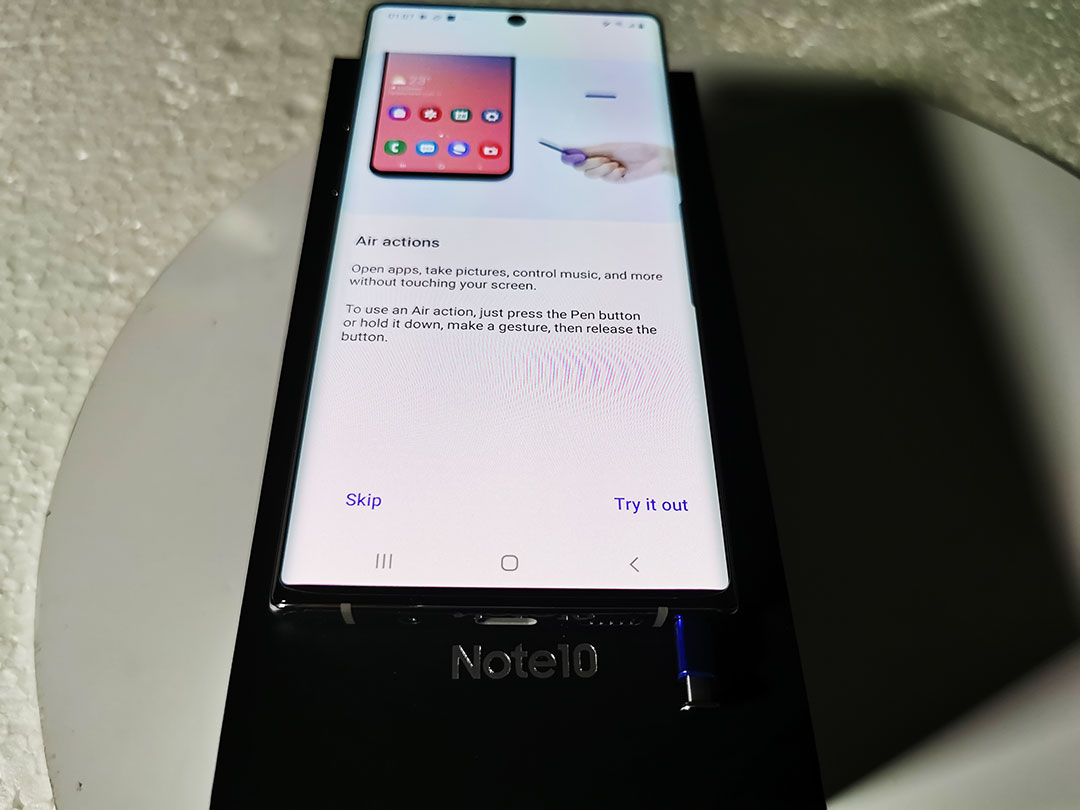 Corporate and gamers can surely think about this device for its style, power and performance. Personal suggestion to Samsung consumers, if you are planning to buy Samsung Galaxy S10, I would suggest you buy the Samsung Note 10, especially with the improved S Pen. Bloggers and people who create a lot of videos and click a lot of Selfies should consider this smartphone, especially the new S Pen gesture function. 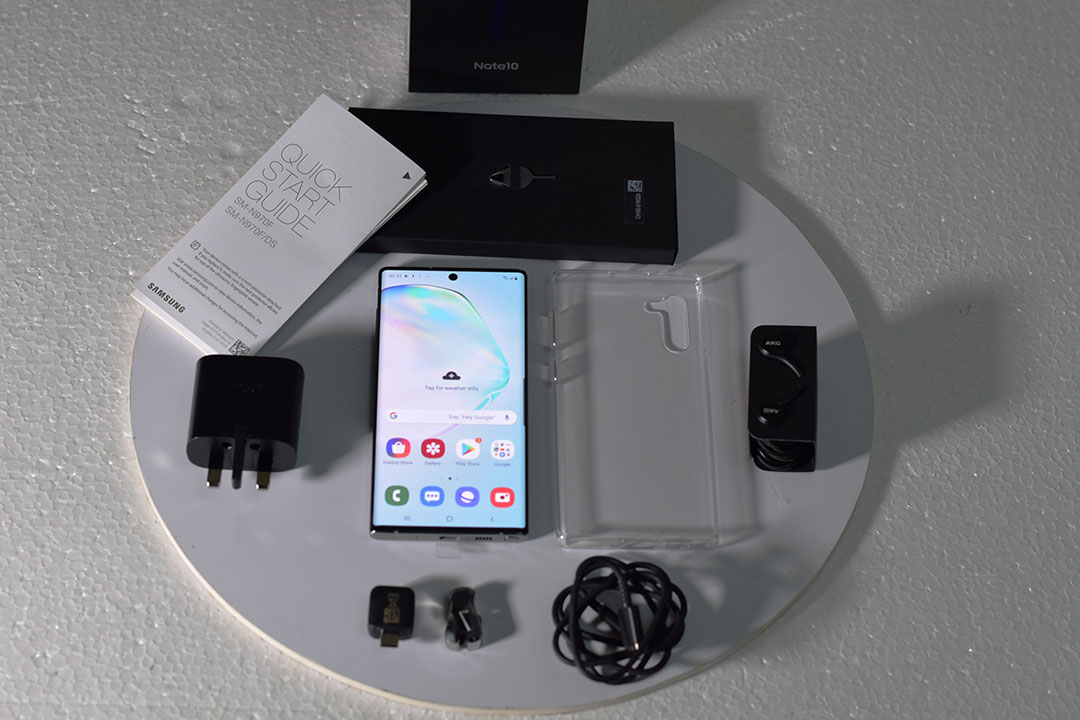 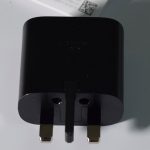 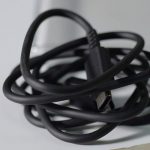 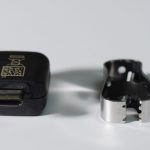 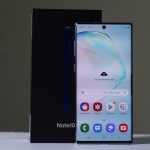