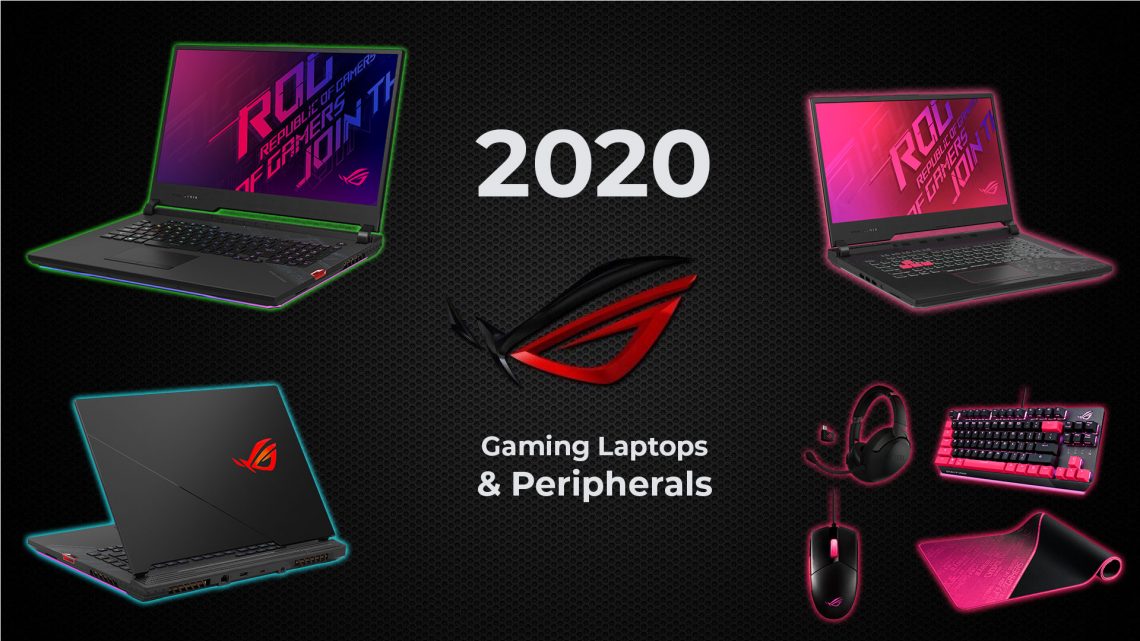 Serious overclockers and enthusiasts have long harnessed the superior cooling benefits of liquid metal for high-end machines, but its application was not feasible for mass production — until now. Following a secret, year-long R&D program, ROG has patented a factory-application process yielding significantly better CPU performance, lower temperatures, and reduced noise for gamers at every price point.

Over a year of testing liquid metal with various processors, ROG engineers observed a 10-20°C reduction in temperatures depending on the CPU.   Lower temperatures help processors sustain higher clock speeds for longer and prevent fans from ramping up to louder RPMs. The additional thermal headroom can also be used to reach even faster frequencies and higher performance. 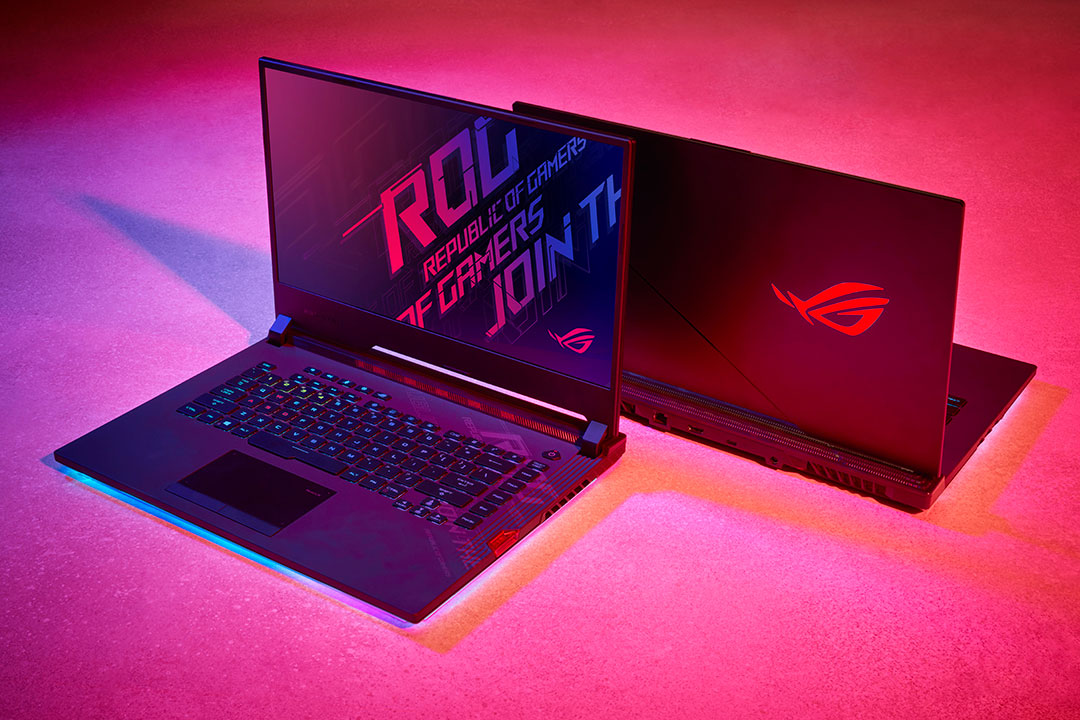 With up to the latest 10th Generation Intel Core i9-10980-HK CPU, ROG Strix SCAR 17 takes down tasks with speed. Its potent 8-core processor pushes frequencies as high as 5.3 GHz with a single core and spins up to 16 parallel threads to blaze through heavy work.

Inspired by a collaboration with BMW Designworks Group, Strix SCAR 17 has unique features that are both visually pleasing and advantageous to airflow. A trapezoidal cut below the display ensures unrestricted airflow when the laptop is open. The scissor-door hinges holding the lid are shifted forward, opening up additional space at the back for a heavily ventilated 3D Flow Zone, where hundreds of precise

To help maintain the strongest signal, Strix SCAR 17 augments WiFi 6 with ROG RangeBoost technology. WiFi signal strength can vary a lot depending on location. Walls, furniture, and other obstructions can easily block connections. 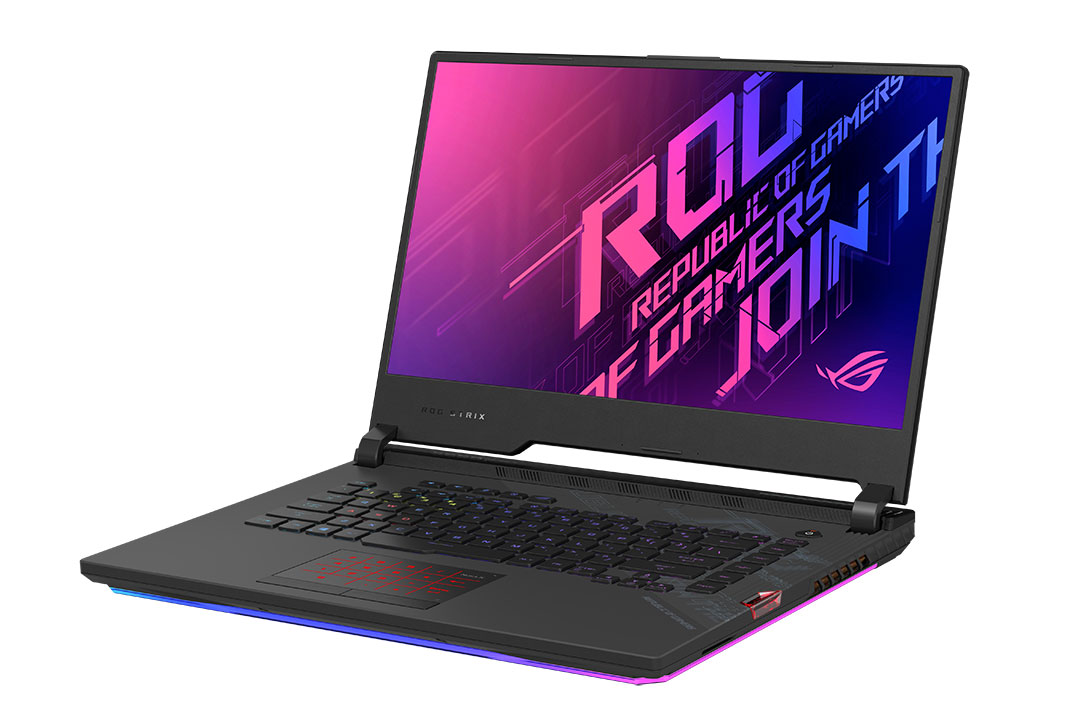 A wraparound light bar glows under the front and side edges, complementing the backlit ROG logo on the lid. Users can coordinate colors and effects across an entire ecosystem of Aura Sync devices to set up the perfect mood lighting.

The USB 3.2 Type-C™ (USB-C™) port offers blazing-fast transfers at Gen 2 speeds. Its DisplayPort 1.4 compatibility allows users to connect an external G-SYNC® monitor for ultrasmooth gameplay. Gamers can put the action on the big screen with HDMI 2.0b, and watch movies and games on a 4K UHD monitor or TV at up to 60 Hz. The USB 3.2 Gen 1 Type-A port at the back is perfect for a gaming mouse, and there are two more on the left for a gamepad and external storage. 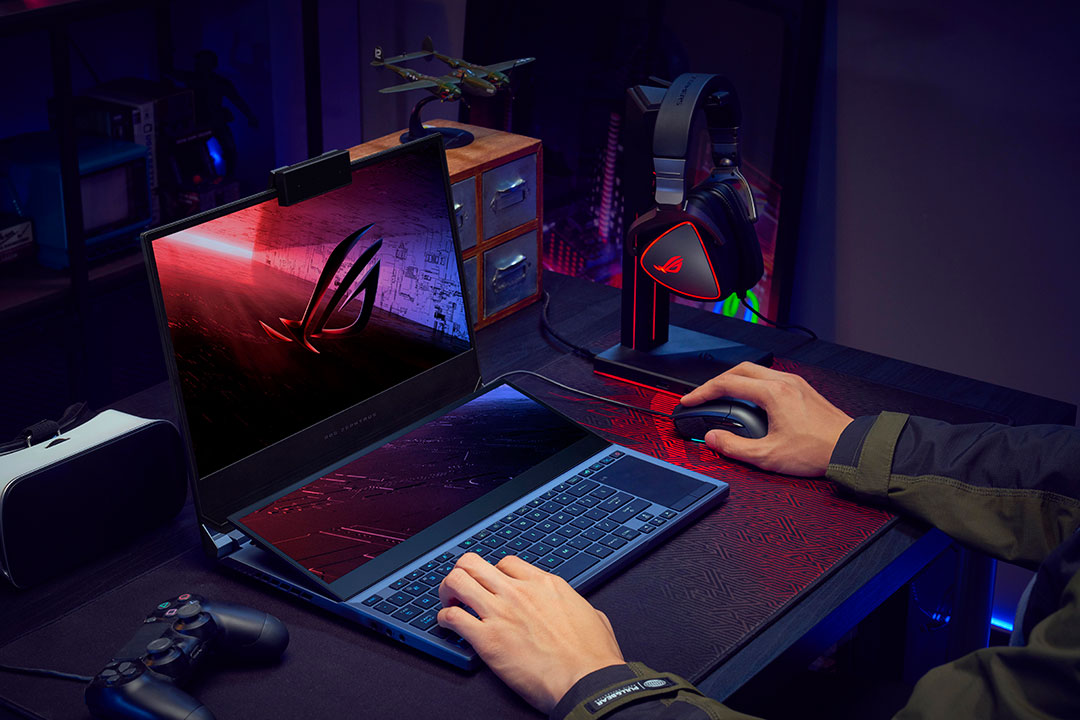 The ASUS Republic of Gamers (ROG) announced the ROG Zephyrus Duo 15, which integrates two displays in an ultraslim form factor to bring a new dimension of versatility to premium gaming laptops.

The sleek magnesium-aluminide chassis with 20.9 mm thin and weighs only 2.4 kg is resilient, with clean lines, all-metal construction, and an anodized finish.

The 14.1-inch panel in ROG Zephyrus Duo 15 is the largest second display ever put in a production gaming laptop. The IPS panel stretches wide viewing angles across the full width of the body, and its 3840 x 1100 resolution boasts a high pixel density that delivers rich details, crisp text, and flowing lines at a smooth 60 Hz refresh rate.

ScreenPad Plus can be used to turn the primary display into a more immersive medium for gaming, streaming, and content creation. Users can get a more expansive view of their game, movie, or other media while using the secondary screen to keep an eye on emails, social media, and more. 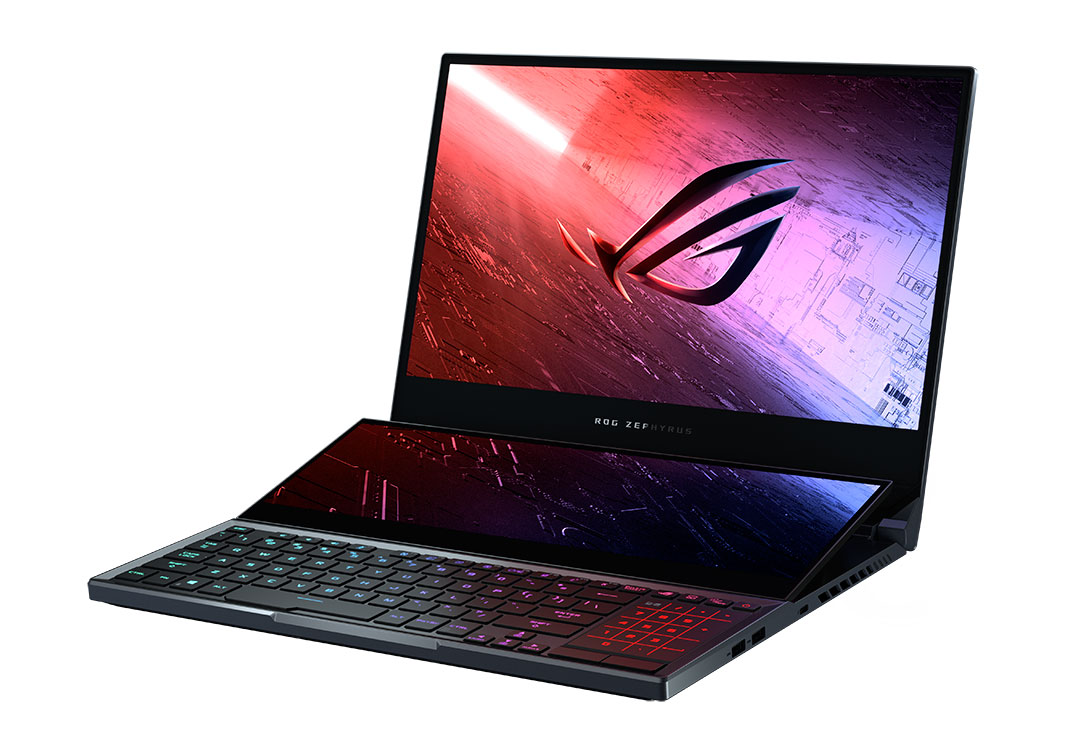 With AAS Plus, tilting the touchscreen at an angle opens a larger 28.5 mm air intake, and allows the fans to draw in cooler air from above the laptop instead of warmer air from beneath it. This massive air intake increases airflow by up to 30% over previous AAS implementations, improving performance and putting less strain on the internal cooling system. Decreased need for heat dissipation means that noise levels can be kept below 46 dB(A) in Turbo mode, and 43 dB(A) in Performance mode.

For Zephyrus Duo 15, users can choose between an ultrafast 300 Hz / 3 ms gaming panel or a high-resolution 4K UHD display. For those who prefer high-resolution experiences, the 4K UHD display offers incredible visuals at the highest fidelity detail. Both of these displays are factory calibrated and PANTONE® Validated to guarantee color accuracy, but this particular panel also covers 100% of the Adobe RGB color space. The wide gamut and accurate colors let gamers who are also creators produce work at a professional level.

The laptop has a new NVIDIA® GeForce RTX 2080 SUPER™ makes everything fast and fluid. Thanks to advanced cooling and ROG Boost, the GPU can hit peak clock speeds as high as 1330 MHz in Turbo mode.

With an 8-core 10th Generation Intel® Core™ i9 CPU hits speed as high as 5.3 GHz on a single core and can engage up to 16 parallel threads with Hyper-Threading technology to power through heavy-duty tasks. Two nimble NVM Express® PCIe® x4 SSDs run in RAID 0 to provide plenty of high-speed storage. USB Type-C™ (USB-C™) with Thunderbolt™ 3 offers versatile connectivity

The laptop can also charge via USB Power Delivery, so users can take care of lighter work with a 65 W USB-C adapter that’s much smaller than the standard unit required for full performance. If the battery runs low and there’s no free socket available, users can buy time by charging from a compatible USB power pack. 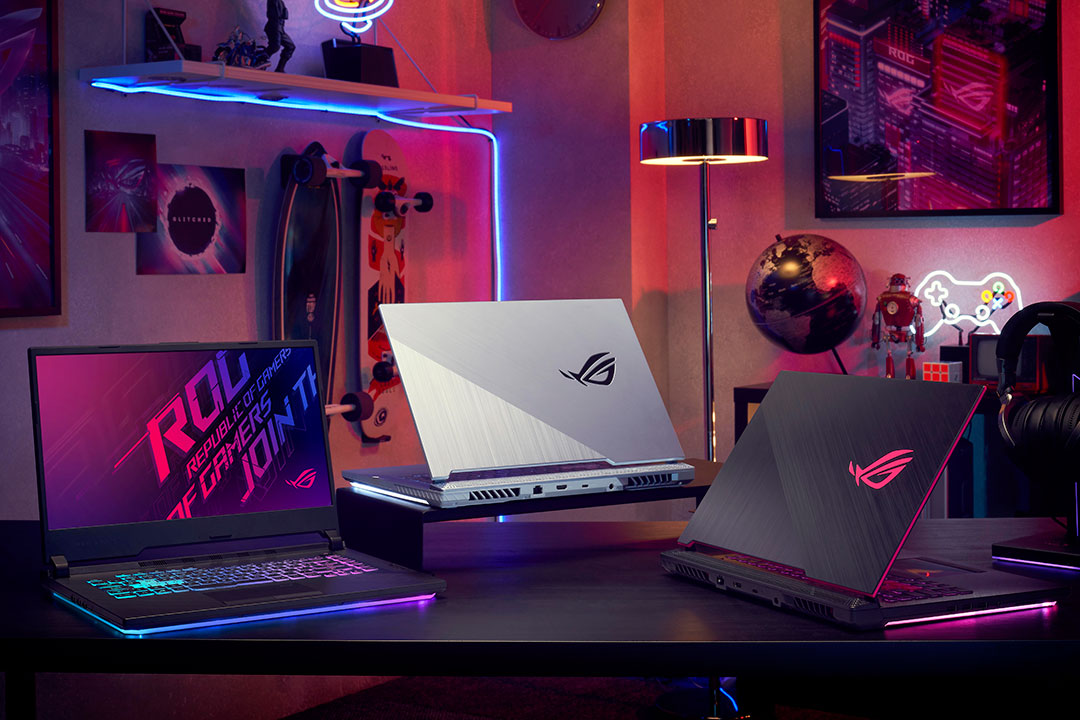 ROG has a long history of weaving Aura Sync into a huge ecosystem of devices to let gamers shine a light on their personalities through their gear. However, many gamers are looking for ways to express themselves without powering on their RGB lighting. That’s why the ROG color palette is expanding to include a new cyberpunk-inspired shade. 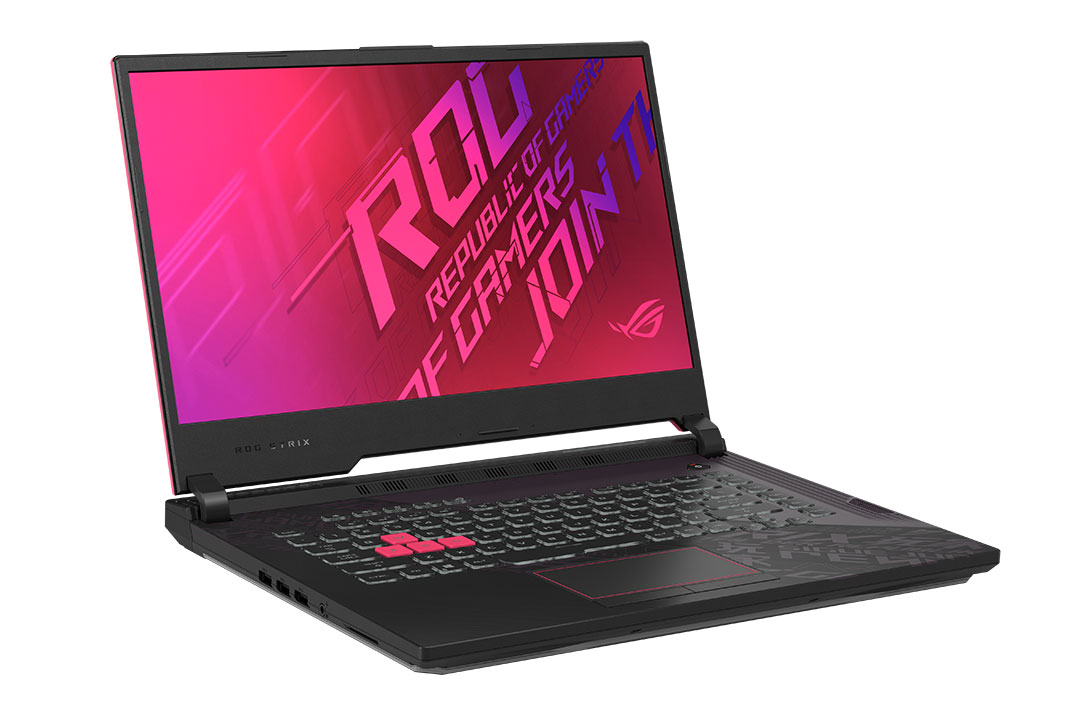 A sleek stripe around the chassis mirrors the outlined edge of the touchpad, while cybertext patterning adorns the deck. Brighter touches include highlighted WASD keys and an unmissable pink ROG logo across the lid.

The laptop comes with the latest 10th Gen Intel® Core™ i7 CPU has 8 cores and 16 threads to speed through everyday work and play.

Strix G15’s versatility is rounded out with ultrafast WiFi 6 networking for lower latency and less lag on compatible networks, up to two NVMe PCIe® 3.0 SSDs running in RAID 0 for warp-speed load times, and a third upgradable SSD slot that lets users add terabytes of space. Strix gaming laptops all feature an easy-upgrade design that hugely simplifies memory and storage modifications. 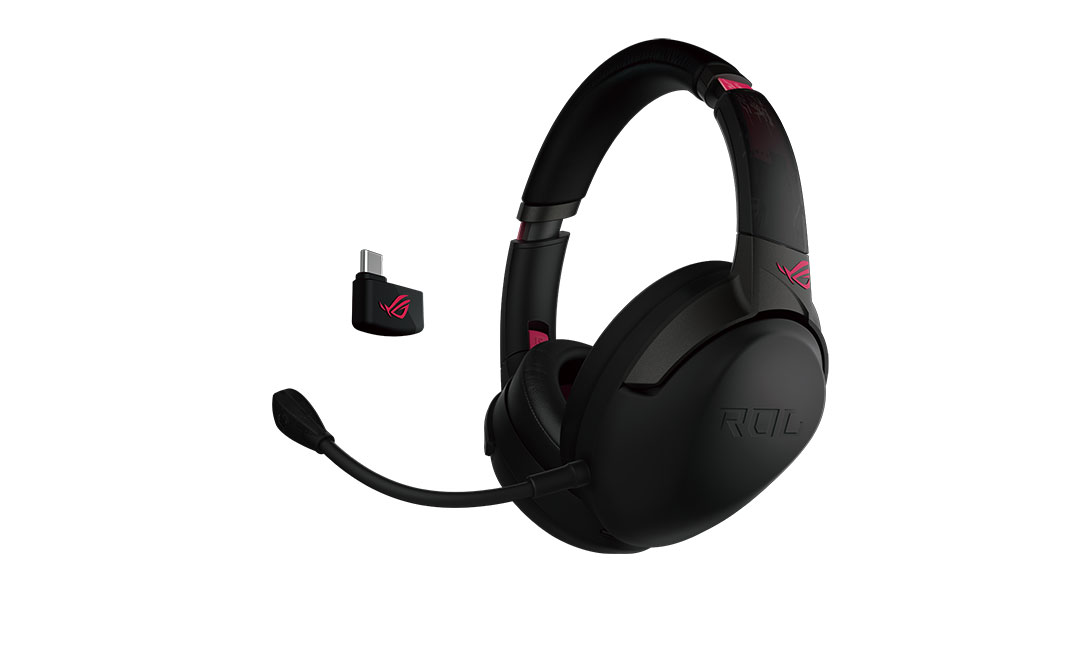 The lightweight Strix Go 2.4 charges fast, has a long-lasting battery for nonstop gaming sessions, and comes with a USB-C to USB 2.0 adapter plus a 3.5 mm connector, making it easy to connect to different devices. Piping hot-pink details in and around the headband, ear pads, and ROG logo give it that special touch, while the rest stays bold black to prevent stains. 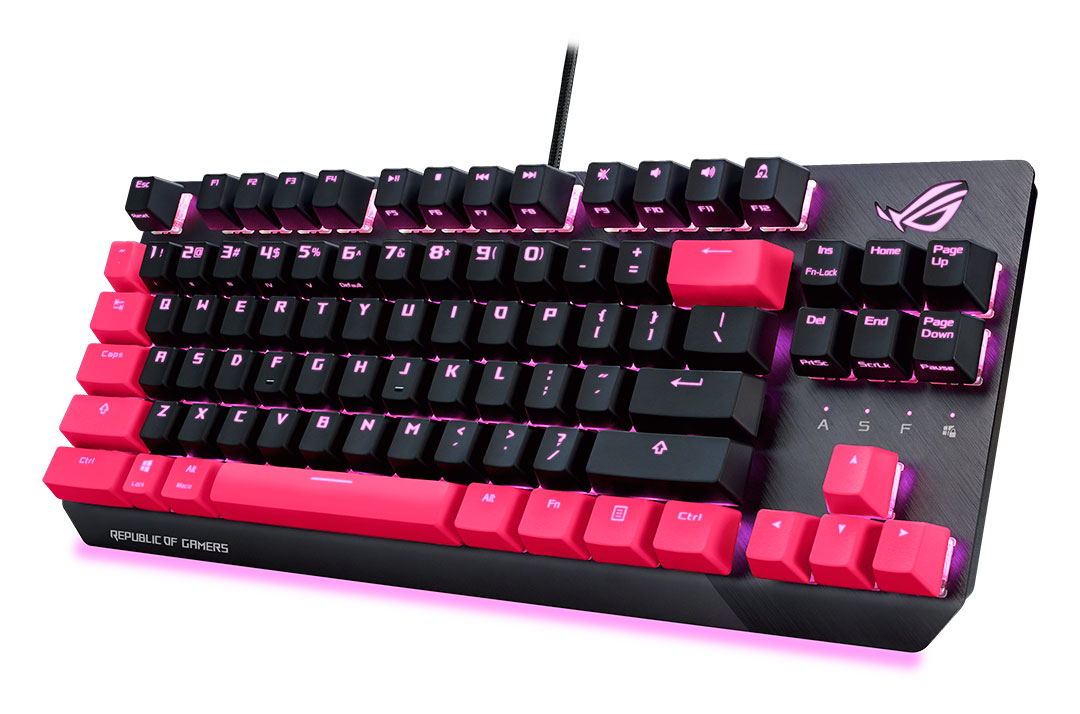 The new ROG Strix Scope TKL Electro Punk keyboard. Aura Sync lighting shines under every key, through the ROG logo, and even casts an RGB under-glow from below.

This mechanical keyboard was created specifically for fast-paced multiplayer gaming, forgoing a full number pad to make more desk space for rapid mouse movements. Its enlarged left CTRL key is also easier to find in the FPS frenzy. Decked out with Cherry MX switches, gamers can punch in complex commands with confidence. With its durable, aluminum-topped construction and compact size, Strix Scope TKL Electro Punk is easy to fit into backpacks for travel to LANs, tournaments, and other esports events. 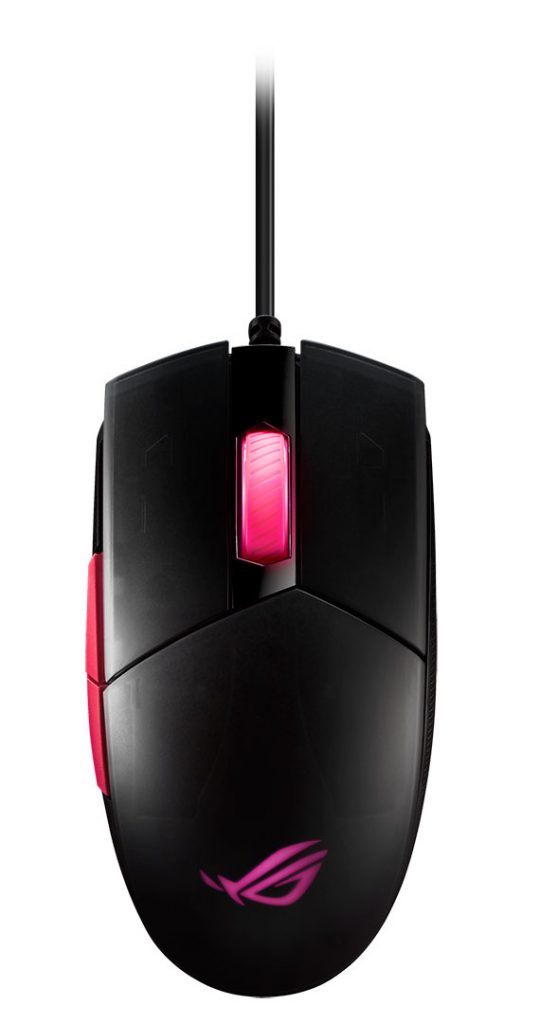 Programmable buttons above the thumb-rest pop against the body of the new ROG Strix Impact II Electro Punk gaming mouse. With Aura Sync-enabled RGB lighting integrated into the logo, scroll wheel, and front, this stunner shines from top to tail.

Its lightweight, 79g frame features a pivoted button mechanism for precision speed and a tactile feel. Even the mouse’s soft-rubber coated cord minimizes snags and drag.

The 6,200 dpi optical sensor ensures accuracy and responsiveness, while an on-the-fly DPI button can switch between four sensitivity profiles. An exclusive push-fit switch socket design makes it simple to change click resistances and extend a mouse’s lifespan. Five programmable buttons can be customized to suit any playstyle. 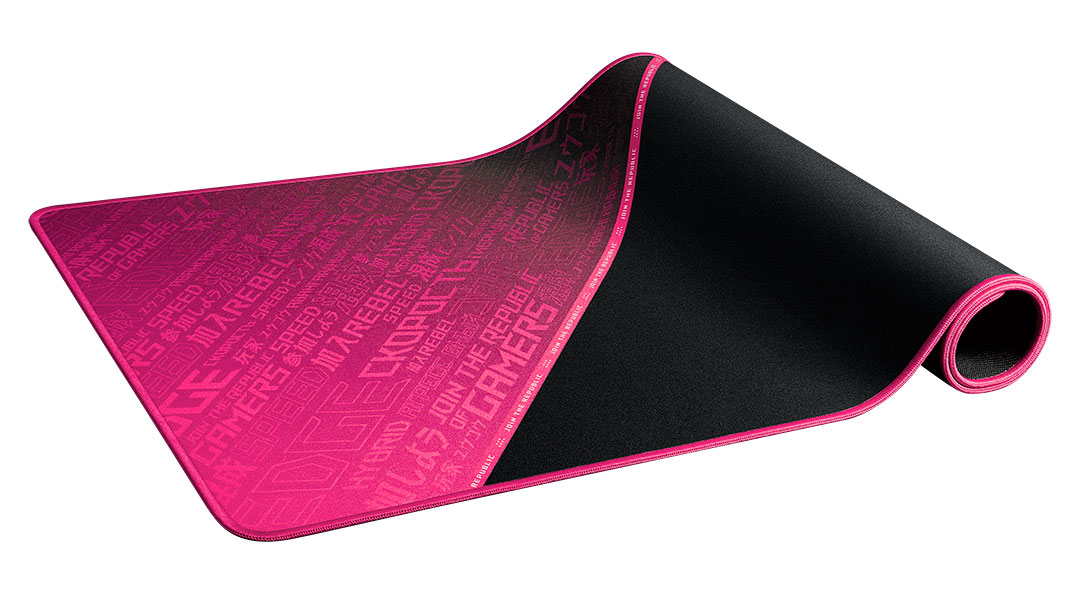 Every Electro Punk edition Strix G15 laptop comes with a special ROG Sheath desk mat that dials up pinpoint precision for gaming mice. At a whopping 35 inches across and 17 inches deep, the pad provides unrivaled comfort and cushion for ROG peripherals. 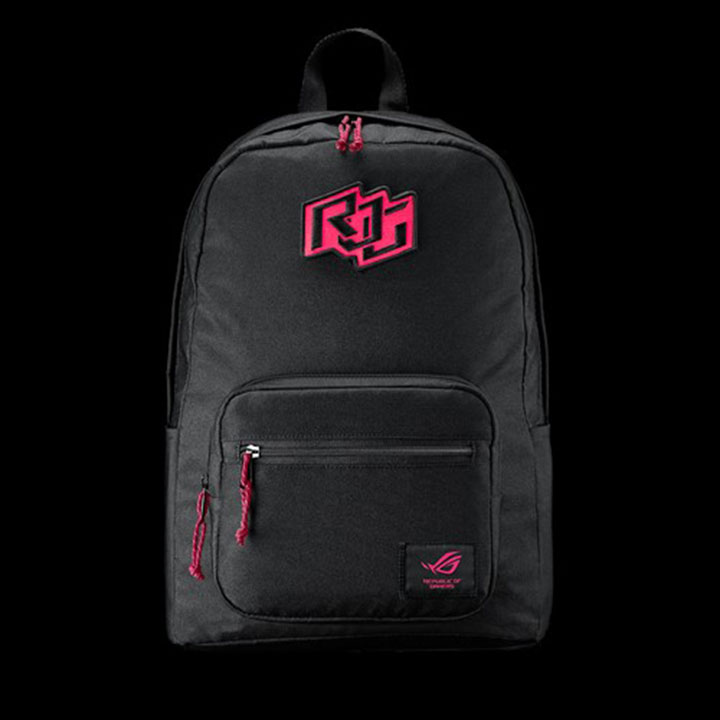 The Electro Punk collection is made more portable with the bundled ROG Ranger BP1503 backpack. Customized with pink piping, patches, and a saucy slash across the front, this 15-inch laptop backpack is made with a durable, lightweight water-repellent exterior to protect gear from the drizzle and everyday splashes. Mesh netting inside lets users organize their cords in tangle-free fashion, while a cushioned compartment keeps a Strix G15 or other gaming laptop cozy.

5 ways drones can speed up the fight against COVID-19, strengthen enforcement of #stayhome campaign

Review of Realme 6 Smartphone in UAE