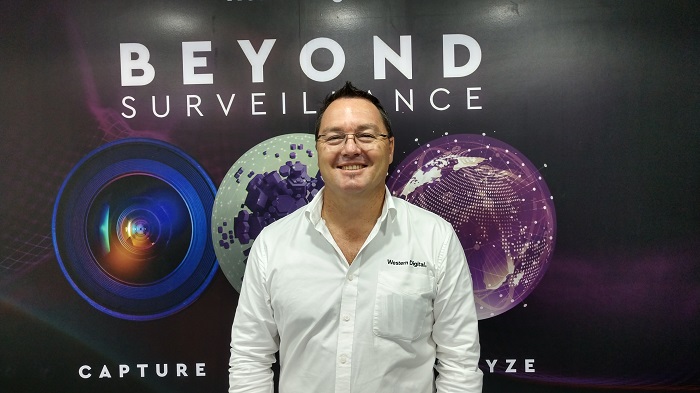 Interview with Brad Bennett of Western Digital about Beyond Surveillance 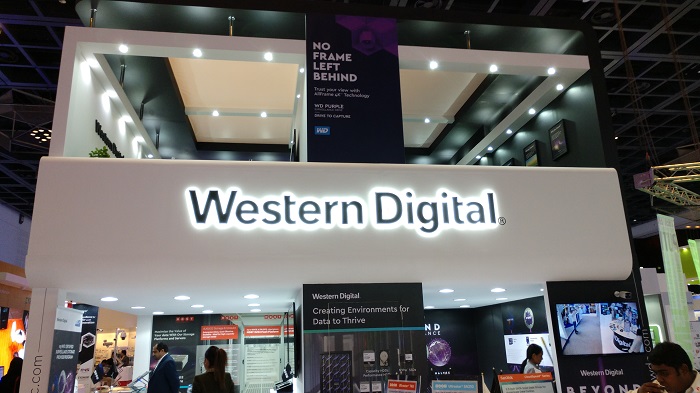 Western Digital was present at the GITEX Tech Week 2018 with a beautiful stand and focusing on enterprise products and especially about Beyond Surveillance. As I was invited by the PR team to come and visit the stand and see about the latest products of Western Digital, the Purple microSD caught my attention and was curious to know more about the product which is part of the Beyond Surveillance.

I was able to speak to Brad Bennett, the Senior Channel Marketing Manager of the Middle East and Africa. 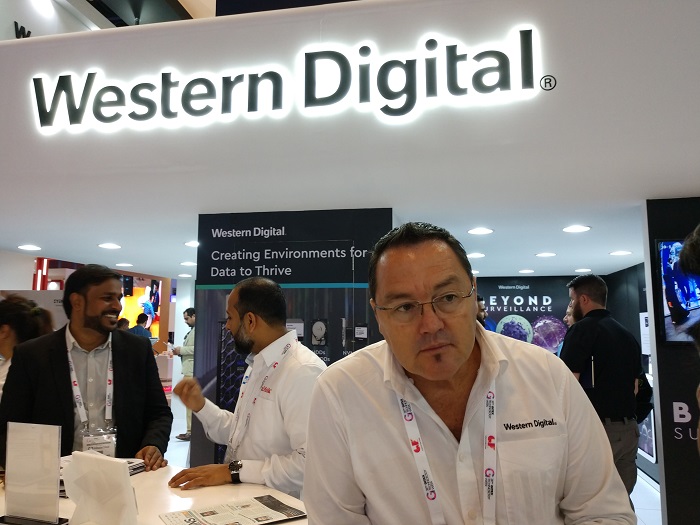 Q: Can you please tell us more about Beyond Surveillance of Western Digital in GITEX Technology Week 2018?

A: The concept of Beyond Surveillance is to taking the edge to core concept and giving the customer from a range of microSD card which used to be Sandisk Endurance card and now rebranded as the Western Digital’s Purple card. So it is the card which can record continuously up to 10,000 hours and you can play back on it.  The main quality of the card to record and not losing data and other part is the storage. The purple is for backing up and storing the data from the camera on the SD card and third part of Beyond Surveillance is the analytics. So what we say, capture, store and analysis and analytics is the ability to access that information and analysis about a full report about trends people and about other cameras are capturing. That is really about Beyond Surveillance.

In old days, we used to have the purple drive that used as the surveillance hard drive and we just expanded the ability to access data for analytics to have the edge with microSD card. 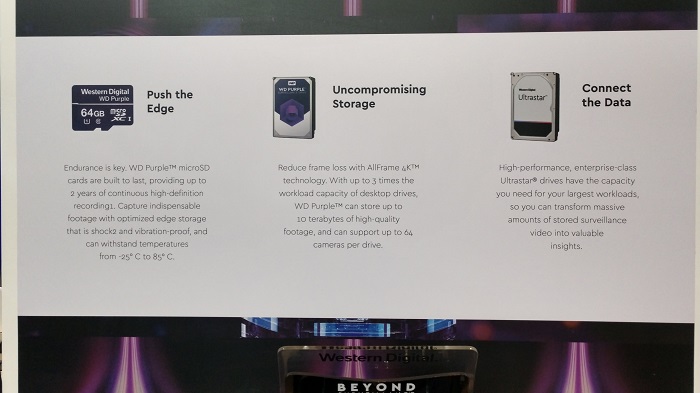 The Beyond Surveillance Purple drives_&_microSD card

Q: So basically it is the same purple drive with additional microSD has been added?

A: Yeah! Basically, the core is the purple drive, that means it is optimized for better surveillance but we have gone from edge to core, so the edge is the card in the camera and core is the stored data and analytics. It is the same program rebranded as Beyond Surveillance.

Q; We are aware Sandisk has been a champion in the microSD card, As I am noticing purple microSD is Class 10 like the Sandisk card, is this same microSD only rebranded as Western Digital Card or there is a difference between both the microSD cards?

A: Well there is a difference between the cards, your Sandisk Ultra Card, for example, is optimized for Photos and videos, it has performance rating terms for speed and video capture. This card (Purple microSD card) is a Class 10 card which is optimized for Video Capture and storage and it is optimized to read continuously up to 10,000 hours. So the configuration and firmware of the card is very different from the consumer card, were the Sandisk Ultra is able to capture in burst mode capture or capture HD Definition or 4k video recording.

Q: So can a photographer use a purple microSD card instead of the Sandisk Ultra card?

A: Not really, the purple card is not optimized for speed, he will not get the same results using this card that he would get on the Extreme Pro card, which has got higher speed rating for photo capture and it has got a higher rating for video capture. The purple microSD card is endurance card which is better for long continuous use and the other card is meant for multiple uses for a short period of time.

Q: So when you do a short burst of video recording on the camera for a half hour and switch it off?

A: Yes! Also like using the extreme pro card on Go pro in burst mode, Purple microSD card is not optimized for burst mode photography were an Extreme Pro card is made for that purpose and that is our consumer range.

Q: Ok! If vice versa, people want to use the Ultra microSD for surveillance, it will not work as it doesn’t have the endurance?

A: I am not saying it will not work but will not get the same 10,000 hours continuous read and there could be a higher chance of card failing and recording and capturing properly. 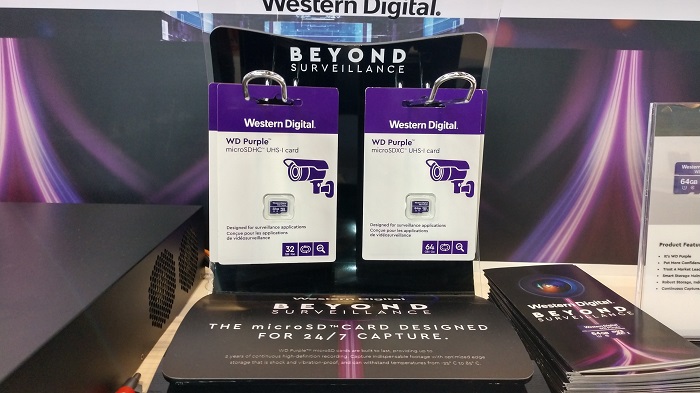 The Beyond Surveillance Purple microSD card

Q: Can you tell us about the price structure of the purple card compared to Sandisk Ultra?

A: The pricing of the endurance would be different compared to consumer card.

Q: If I have to ask you to rank the countries in the Middle East as per the market focus?

A: UAE has always been our Core market, recently we are also focusing a lot in Saudi Arabia as there is a lot of potential in Saudi. Also, we have focused on the OGGC countries like Oman, Kuwait, Bahrain, we started to engage more the resellers and with the end consumers in those market.

Q: As we are aware of the Western Digital color codes of the hard drives, Can you tell us, which of the color code product making more noise in the market?

A: Well it is not making noise, it is all about prioritized, where the opportunity is in the market. As right now, our presence in the GITEX Tech Week, Purple is our big priority for us, if you want us to say about single color, I would say buy purple.

Q: Generally, how has been your experience in this GITEX Tech Week 2018 compared to last year?

A: it is an interesting question, we have better experience in GITEX this year, we have seen the show has revived itself and pick up and there is lot more business focus on the stand and rather than people coming and browsing which has been in the previous shows and we put up an enterprise area on our stand and there has been a huge amount of interest in that area of the booth which very encouraging for us for the UAE market.

Q: If you have say about Western Digital in few words, what would you say?

Thank you Brad, it was nice speaking to you. 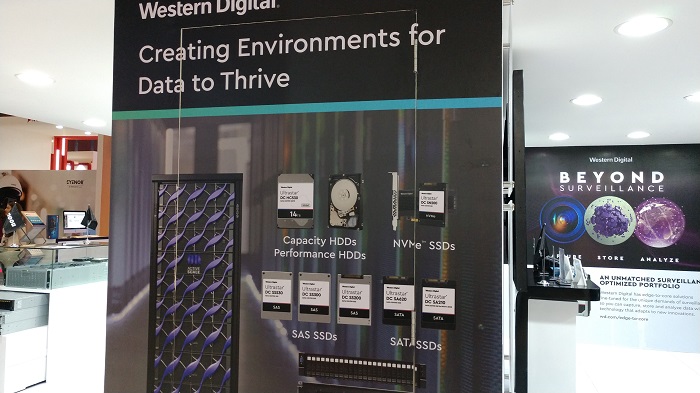