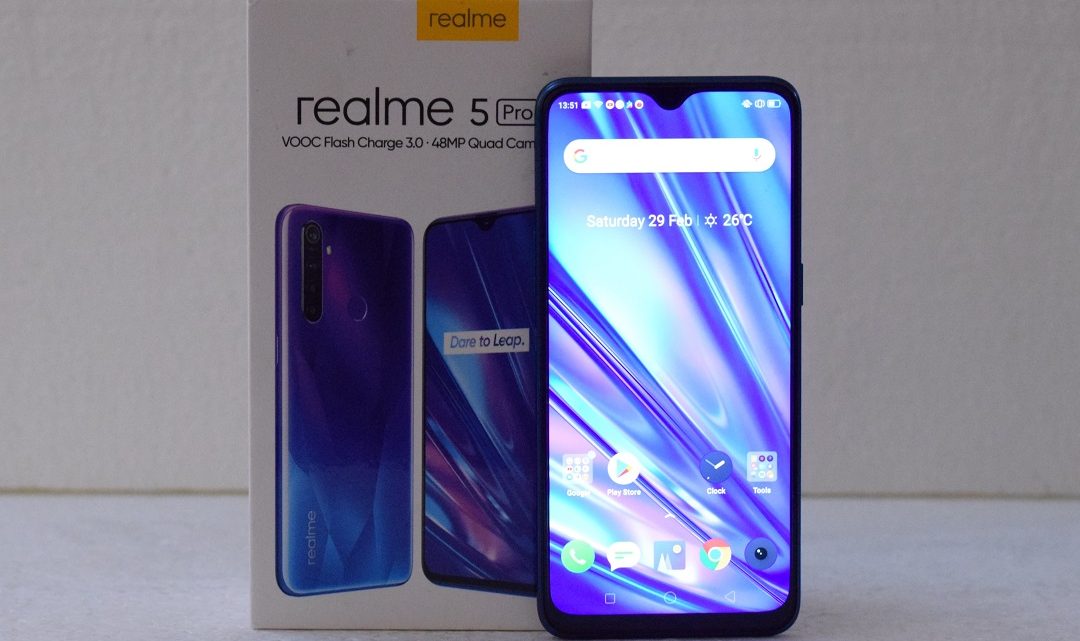 Realme is a very young company and was founded in 2018 on 4th May and company shared ownership by a private conglomerate BBK Electronics which has other brands like OPPO, VIVO and One Plus. 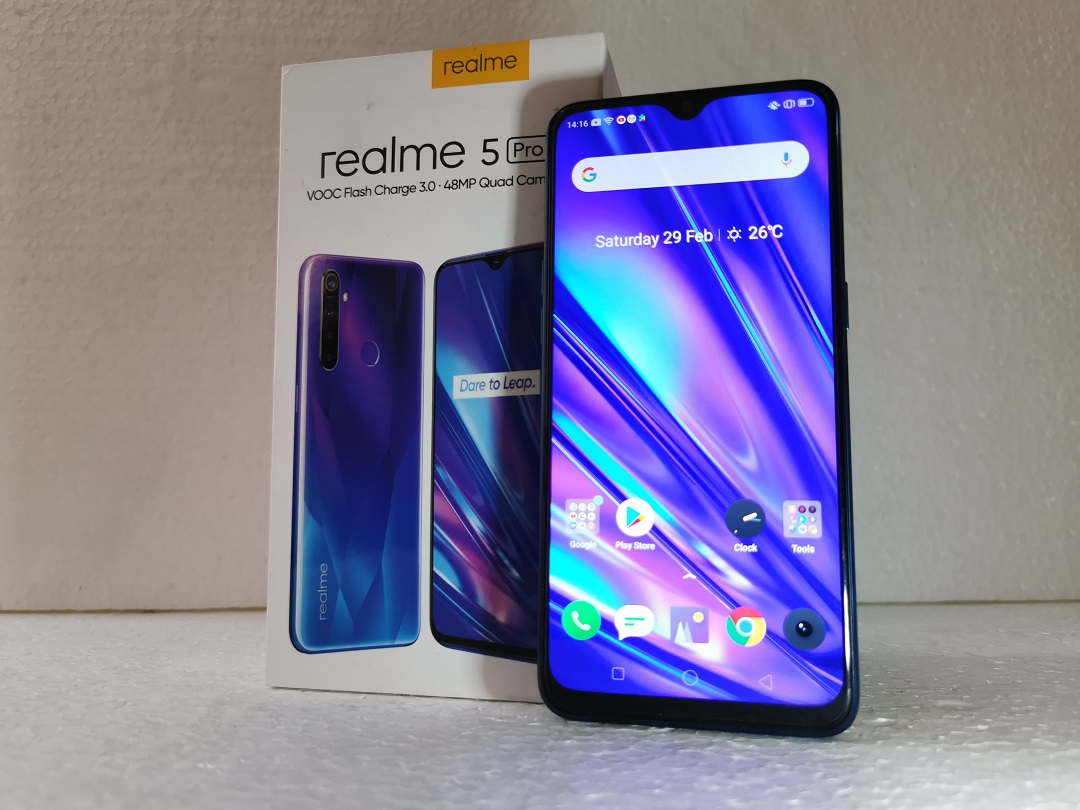 The Realme 5 Pro Smartphone has a dimension of 157 x 74.2 x 8.9 mm and weighing 184 grams which includes a non-removal battery. It has an IPS LCD capacitive touchscreen and a size of 6.3 inches with a resolution of 1080 x 2340 pixels with a screen 409 PPI density and 450 nits max brightness. It has a 90.6% screen-to-body ratio and resolution 19.5:9 ratio. The body build is a plastic frame with the front display protected with Corning Gorilla Glass 3+ and the back panel is protected by the plastic.

The smartphones with the Dual Nano SIM Card Tray Slot(Splash resistant) and as for the network, it can support 2G/ 3G/ 4G LTE 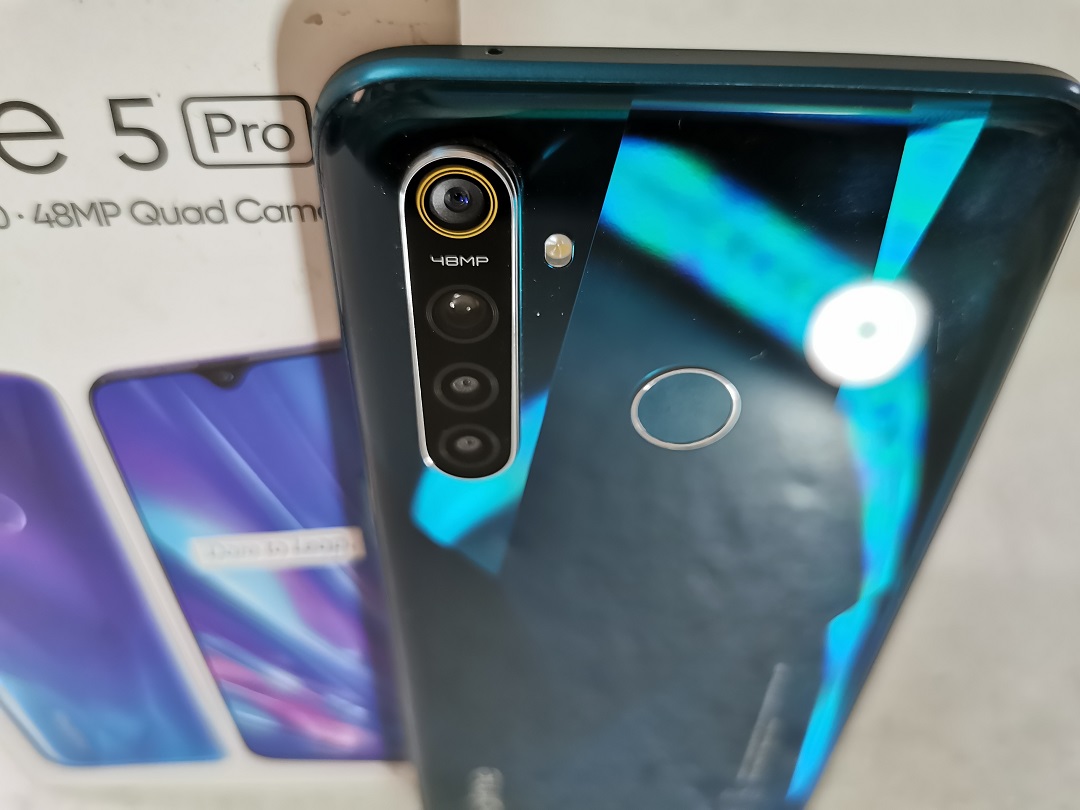 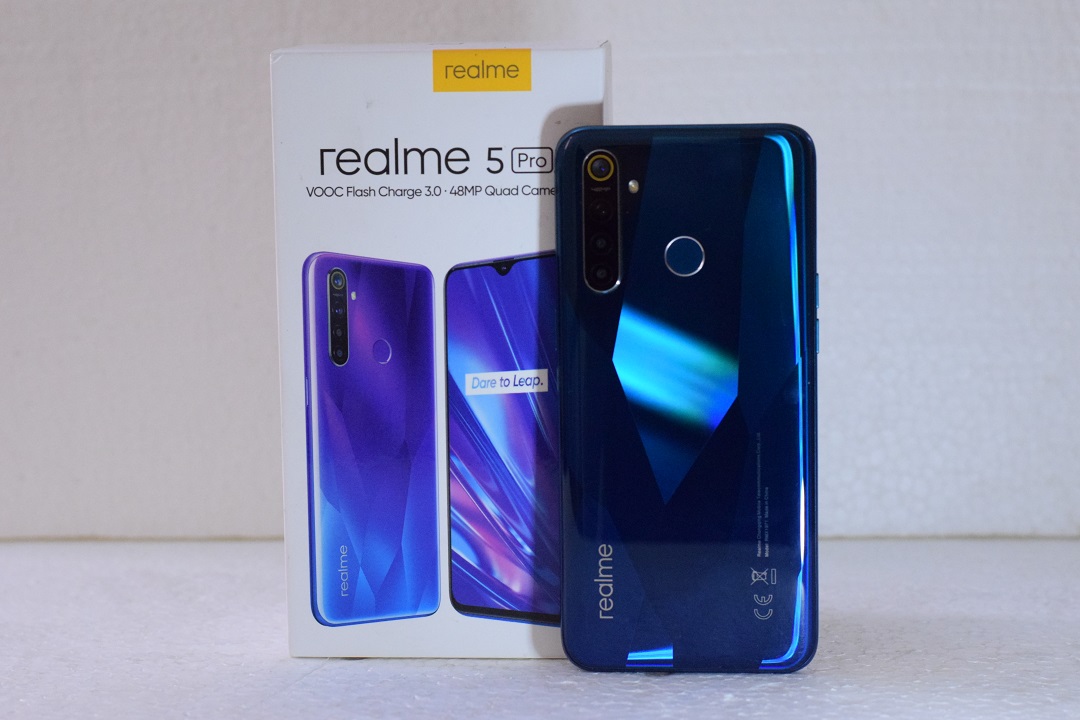 The device which I have received for review is the crystal green back panel but due to the refraction of light, the color looks different under light condition.

With the 90.6% screen-to-body ratio display, the bezel of the phone almost merges with the frame of the phone. The only thing you will notice is in the top area where it houses the sleek earpiece speaker and single-lens camera in dewdrop shape. 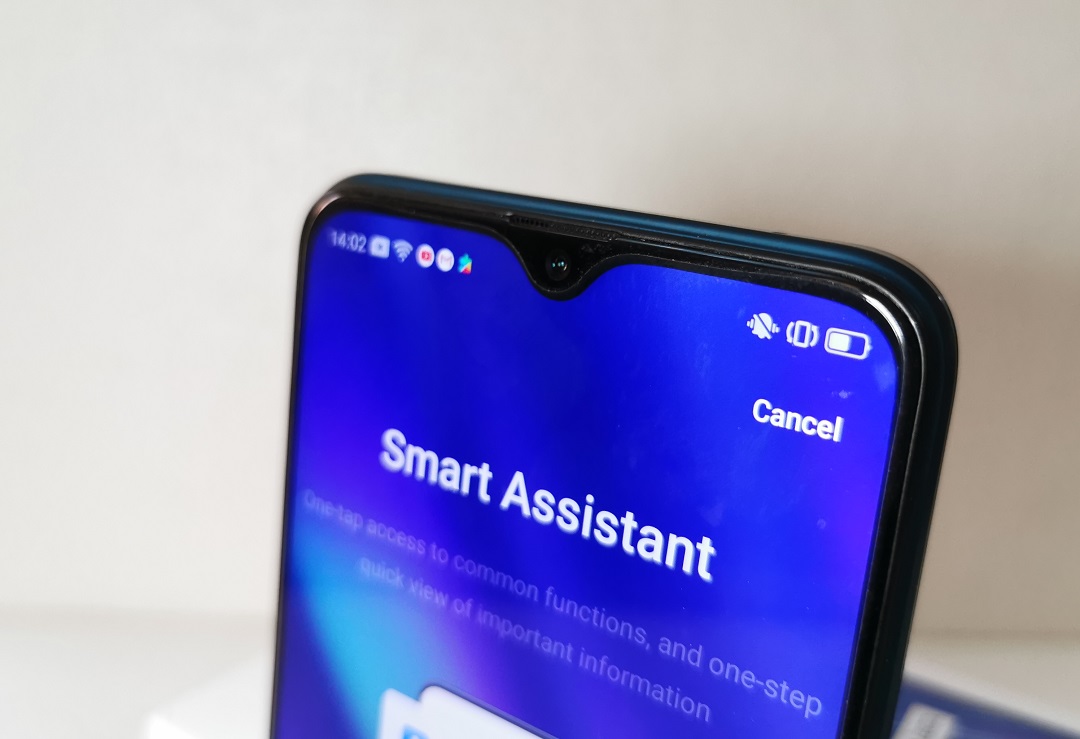 Mostly, the consumer is interested to buy a smartphone with a good camera and features like making calls and being connected on Social Media and work-related Apps. 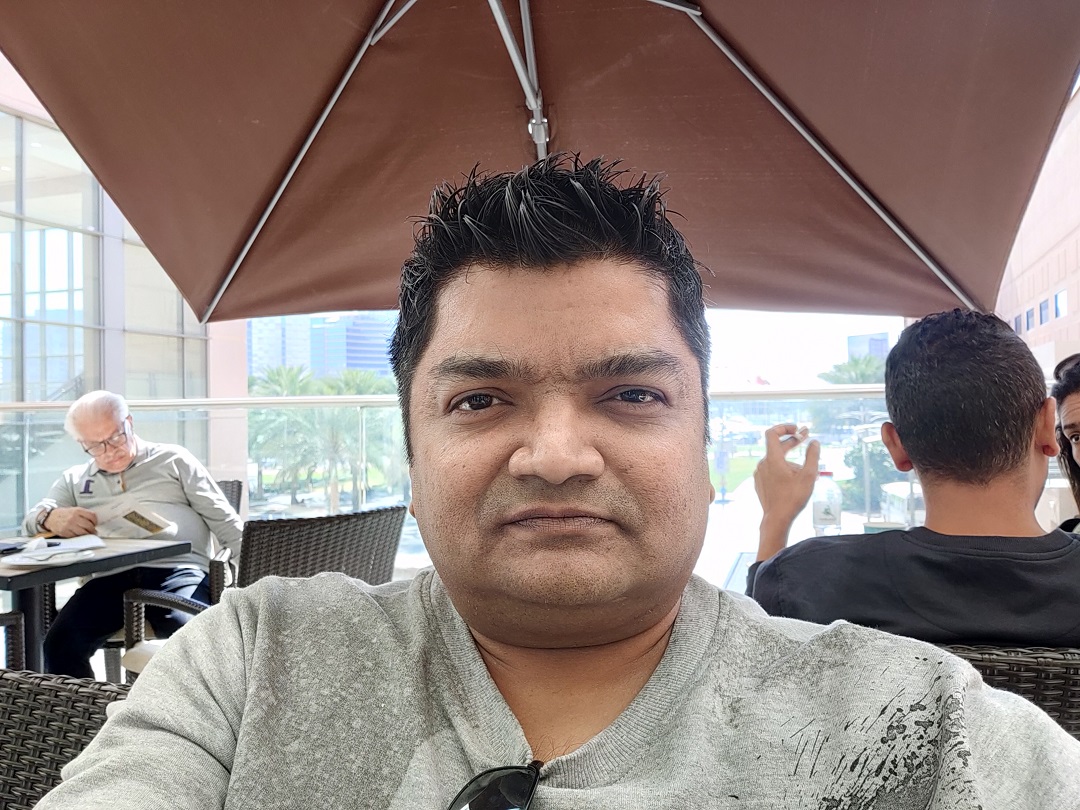 Some of the additional features of the front camera under photo mode, in the setting, is the gesture, so when you hold your open palm in front of the front camera, it gives you 3-sec count and clicks a selfie. You can record videos in 720p and 1080 at 30fps. 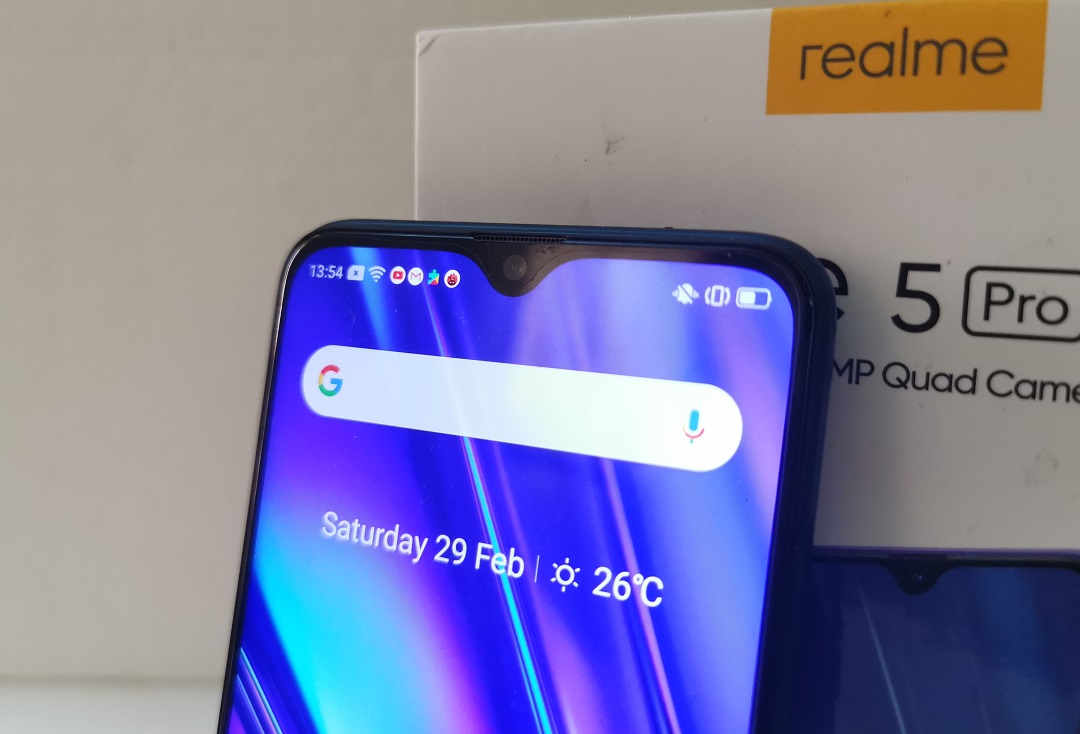 You can also record Time-lapse selfie video and the low light (Nightscape mode) and panorama mode but it clicks only images. The other features include HDR and the smartphone doesn’t have a front LED light for flash but it uses the display screen full brightness as a flash or fill light in selfie mode. It has Ai scene recognition support too. 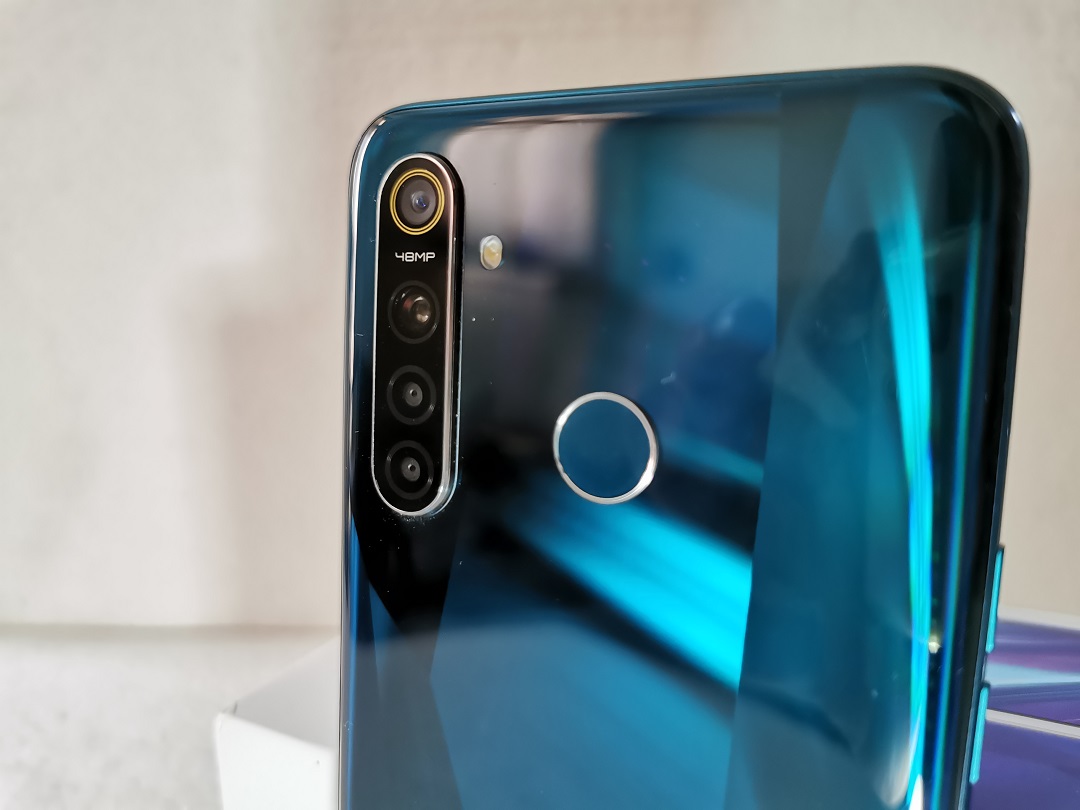 The back panel of the Realme 5 Pro houses the vertical Quad cameras with LED flash on the top left-side and fingerprint sensor on the back panel. The Quad cameras consist of 48 MP (wide) + 8 MP (ultrawide), 2 MP, (macro) + 2 MP(depth). It supports autofocus (laser focus, phase focus, contrast focus), supports EIS (Electronic Image Stabilization). The rectangle shape panel is little protruding from the back panel, so it better to use the translucent phone casing to protect the cameras. 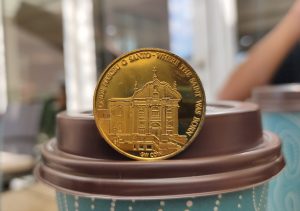 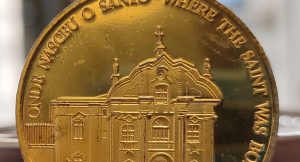 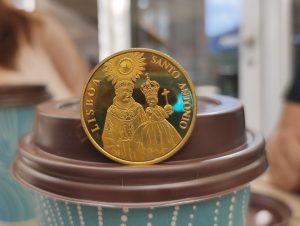 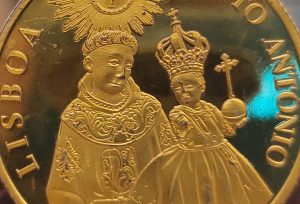 In the photography and video mode, you can click at a wide-angle, 1x, 2x and 5x zoom and on further zooming digitally up to 20x zoom. The quality of the image at 20x Zoom is not sharp. The camera has HDR, Ultra Steady option, macro lens option, chrome boost, portrait mode, and different 10 color scene options. You can record Time-lapse selfie, and under the video, it shows the low light (Nightscape mode) and panorama mode but it is clicks images. It also has the expert mode where you can do manual adjustment of exposure value (EV), white balance (WB), Auto Focus (AF) and Exposure (ISO). 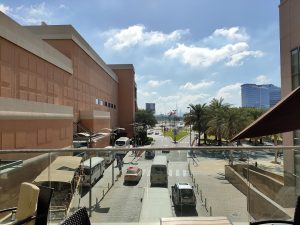 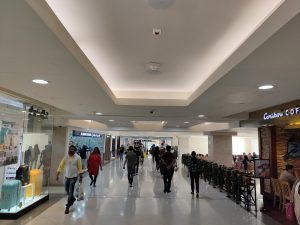 Under the expert mode, you have the option to use all the cameras, wide-angle/macro lens, standard lens, and telescopic lens. In the video mode, you have the direct option of setting the bokeh effect, so as per your choice you can set the aperture and blurring of the background. There is a direct option for portrait mode under the video which detects the face and you can change and set the bokeh of the video.

(Please note: Bokeh mode has to be used sensibly as it may cause out of focus of the video) 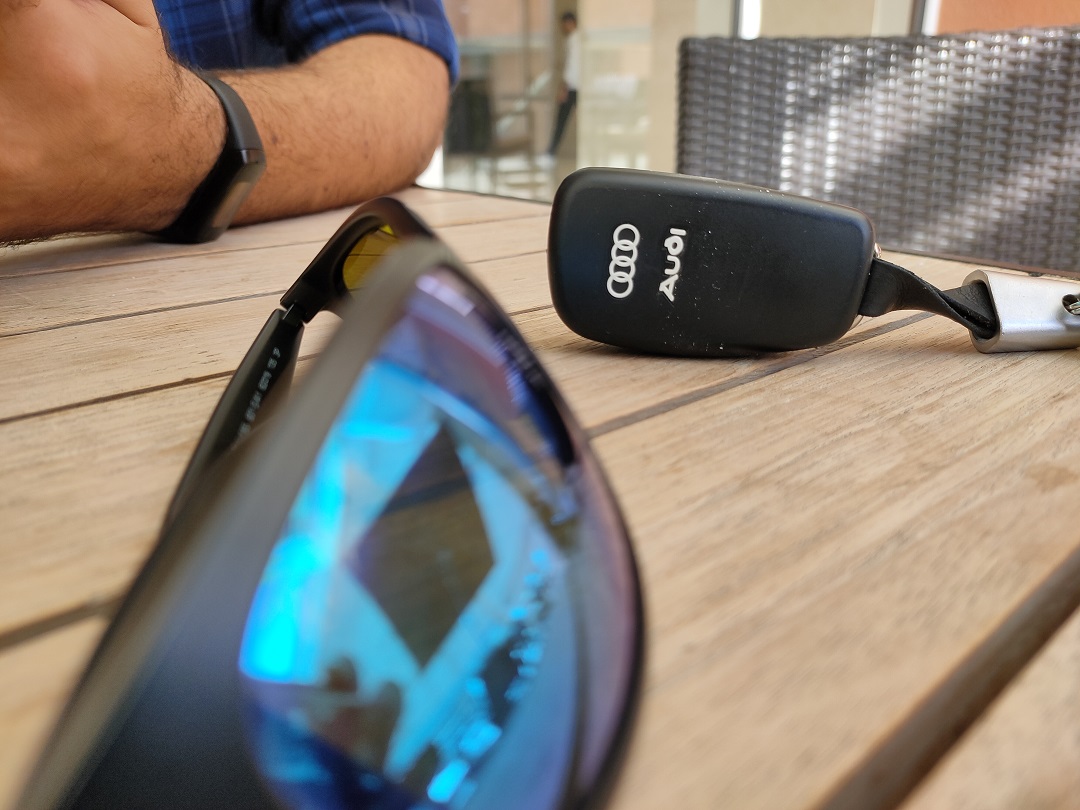 The front and main cameras can click images in 4:3, 1:1, full-screen ratio.  The phone can click videos with compatible format H264 and also H265 format which is available for front and rear cameras.

Under the Nightscape mode, it clicked 3 images continuously and with the software support, it enhances the image. It is faster in capturing compared to other brands. But, under very low light, it didn’t perform very well. 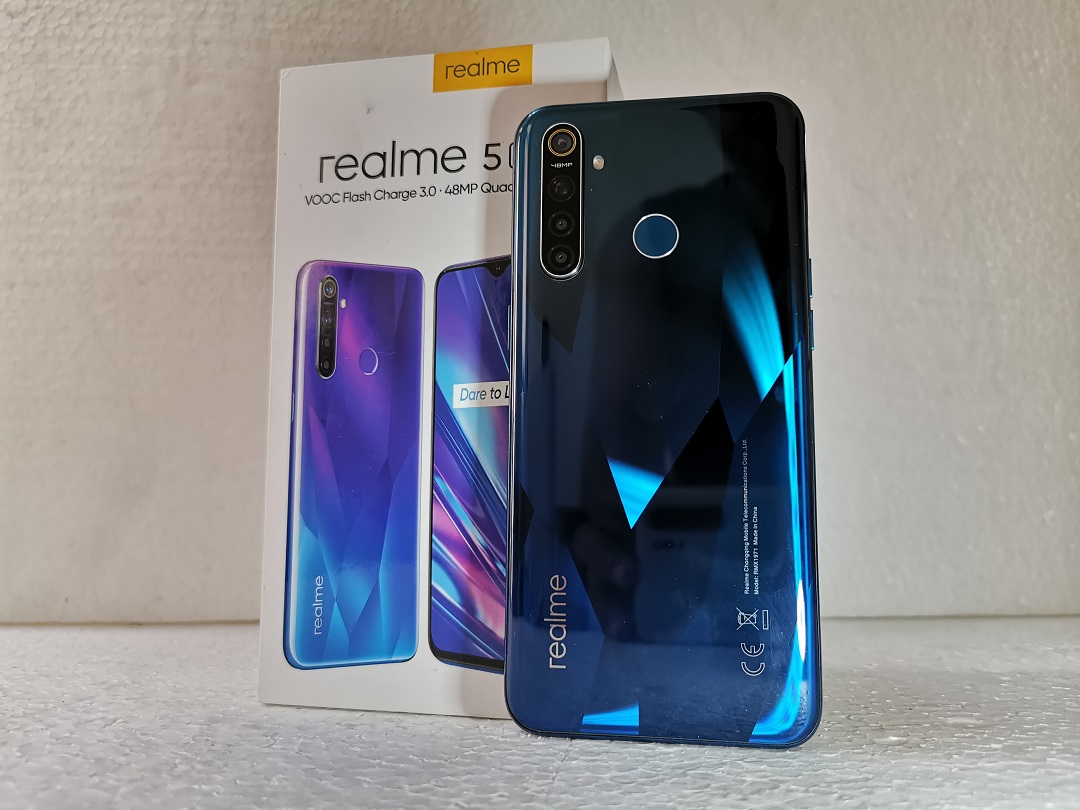 The operating system of the Realme 5 Pro, it has the latest Android 9.0 (Pie) with the ColorOS version V6 as the user interface. So, with Android 9.0, the Realme 5 Pro has all the interesting new features of the like the AI beautification, creamy bokeh for portraits, AI recognition up to 500 scenes. The Qualcomm Snapdragon 712 Octa-Core chipset + GPU – Adreno 616 and Android Pie also helps in better for more accurate facial brightness, contrast for selfies on the front cameras and scene-by-scene optimizations for shots taken on the rear and enhancing the photography effects. The Realme 5 Pro smartphone with the help of AI face recognition for photography and in the video and uses the EIS (Electronic Image Stabilization) to provide a stabilized video.

While on benchmark testing the smartphone, the temperature of the body rose to 33.8°C and the CPU temperature rose to 41.9°C.

(Please note: Most of the smartphones while reviewing and testing had an average body temperature of 32°C to 37°C) 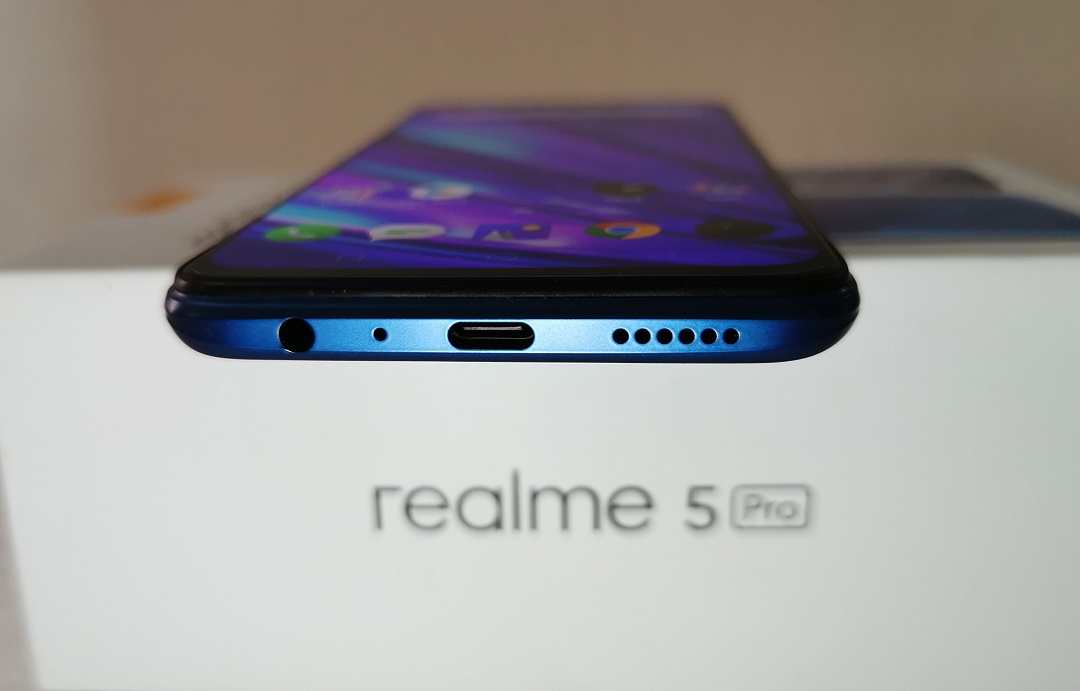 The Realme 5 Pro has a single side speaker grill, so when you are holding the smartphone horizontally, you can hear the right channel of sound and when you hold the phone vertically the sound comes as a single audio channel (Mono).

The trebles, mid-level was clear and bass was good for a smartphone. The volume is quite loud and clear. The device supports Hi-Res audio format and Dolby Atmos too.

The smartphone has Active noise cancellation with dedicated mic. 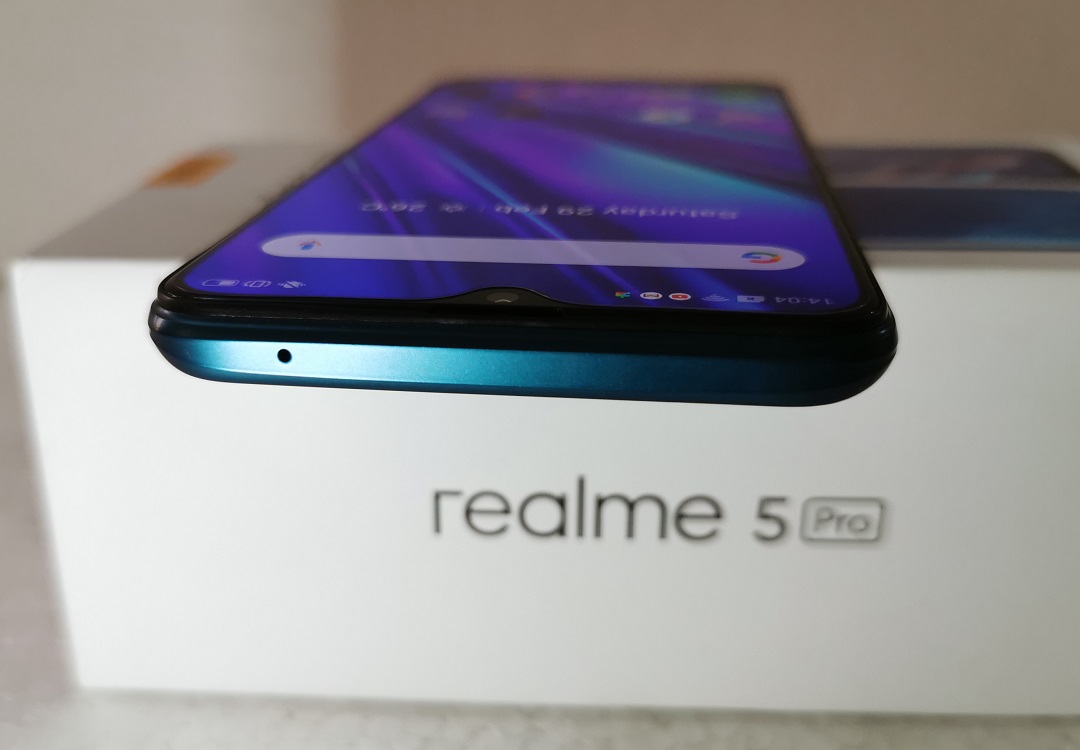 The smartphone comes with 3.5mm jack output but headphones are not included in the package.

The Realme 5 Pro was tested with various types of videos and different genres of music and it passed above average compared to other competitors in a similar price range.

(Please note: The smartphone was held at a distance of 1- 2 feet while testing the audio quality) 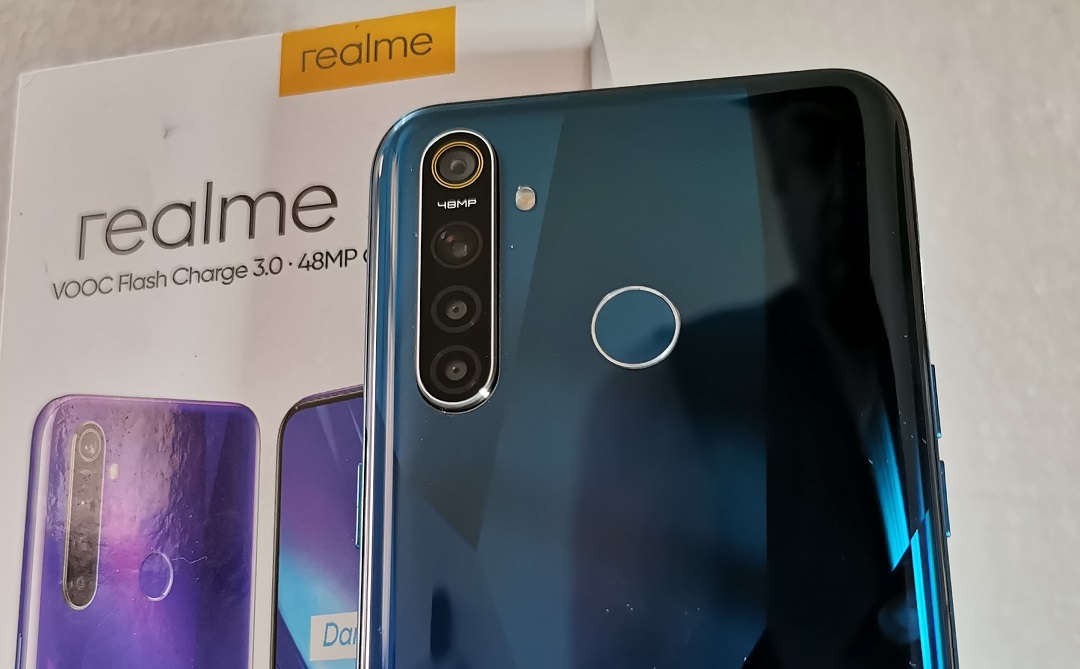 The smartphone has a fingerprint sensor on the back panel, face detection, pattern, pin for accessing the smartphone. You can also use to lock certain folders in the smartphone for further protection.

The smartphone comes with a Non-removable Li-Po 4035 mAh battery which can last more than a day with average usage.

The smartphone comes with USB Type- C (VOOC 3.0) charging input which can charge the phone at 20W: 50% in 30 mins. As mentioned by the company, a fully drained phone can be fully charged in 30mins.

Can the Realme 5 Pro can be a good gaming smartphone?

The Realme 5 Pro is powered by the Qualcomm Snapdragon 712 Octa-Core chipset and Android Pie with 8GB RAM, 128 GB ROM and with the usage of GPU – Adreno 616 which makes the gaming experience good. On the test run with games like Asphalt 9 and Call Of Duty, the phone had no issues in delivering a smooth, stable gaming experience. With Non-Removable Li-Po 4035 mAh battery, you can play longer hours to play games and view online entertainment. 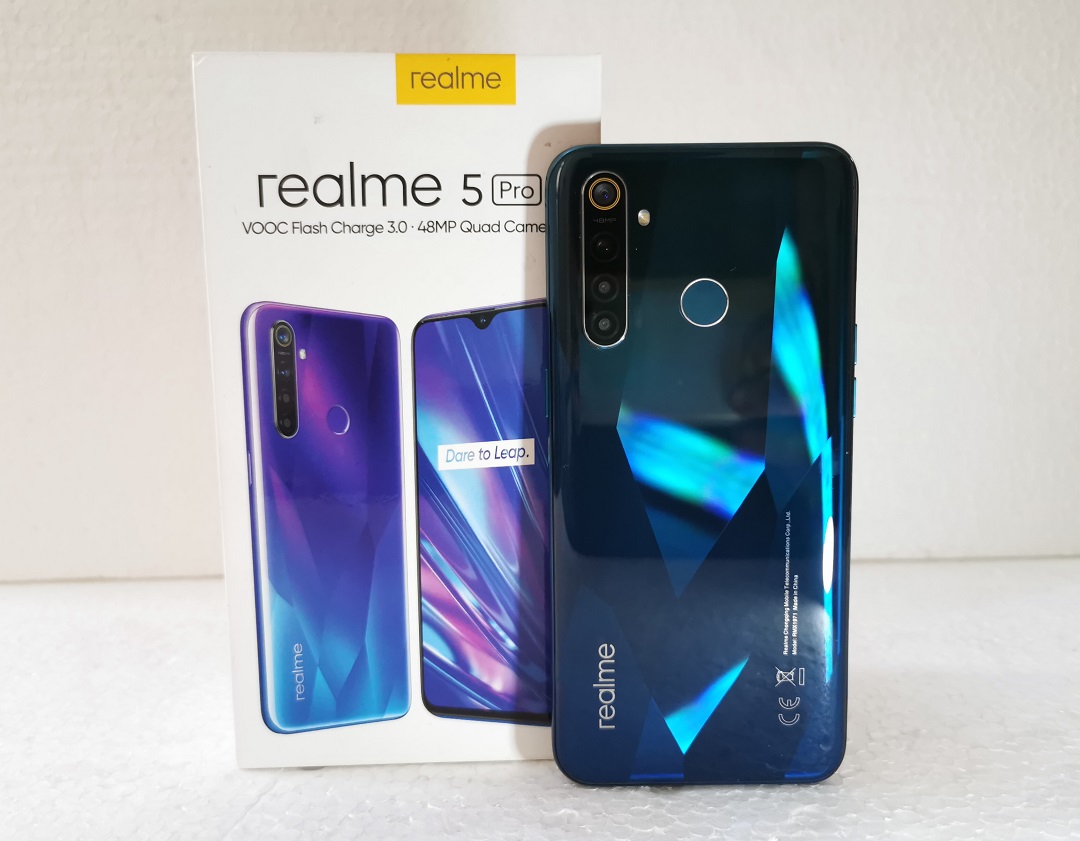 Realme 5 Pro is a very good smartphone for the price, the phone is a higher-mid feature with all the good features for gaming, watching online entertainment. The built quality and color makes the phone very rich and stylish. With Quad cameras with AI support makes this smartphone one of the best in the market, as for the selfies, the single 16MP lens can make difference with the Ai function which can give a very nice creamy Bokeh effect and focus on your face. It has a quick and sharp focus system. 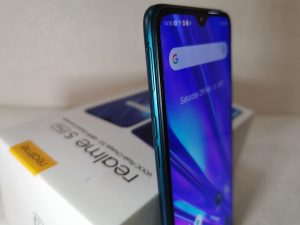 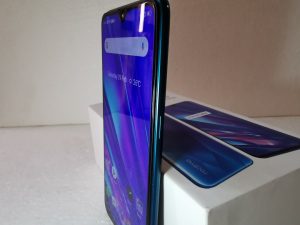 With 128GB ROM space and additional memory space in the Dual Card SIM Tray, it is a good smartphone for the price and can run for the money to its competitors. Gaming is good with Snapdragon 712 Octa-Core chipset and Android Pie with 8GB RAM.

With all the AR and AI effects and functions, it is a very young, stylish and perfect companion for the teens, gamers, businessman and fashion-conscious people.

The only negative was the very low light photography under nightscape mode was not great. 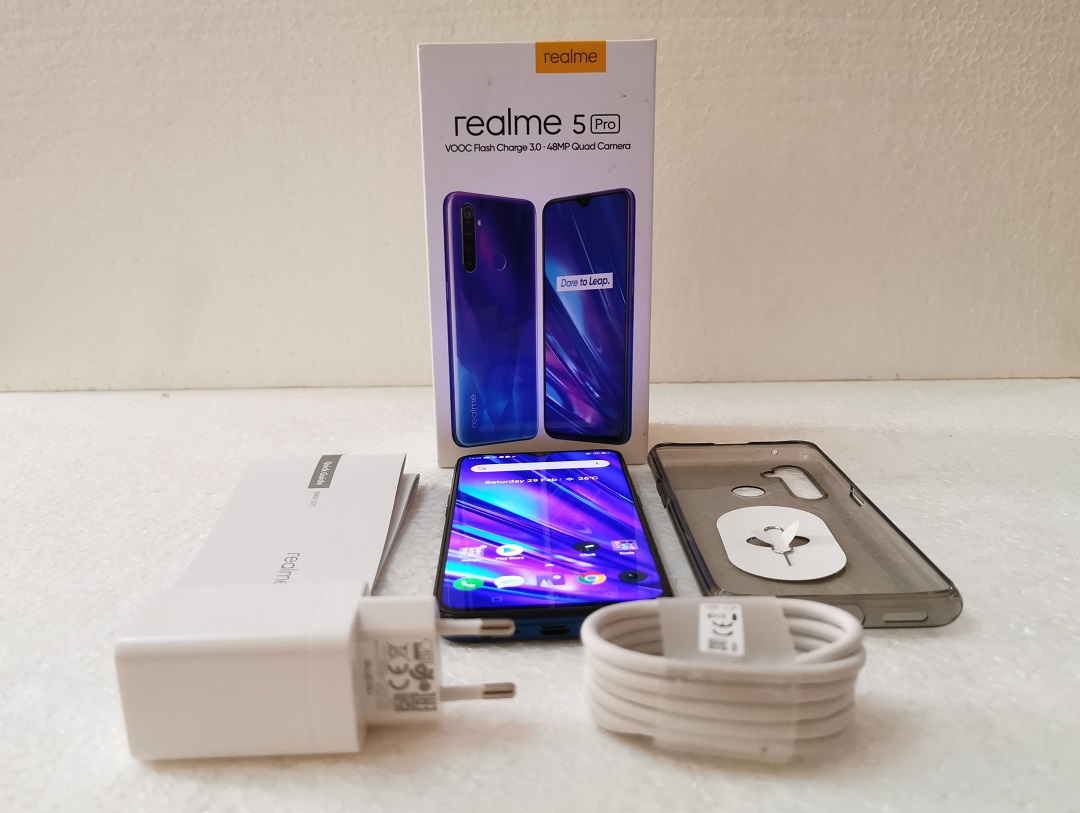 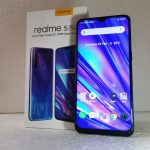