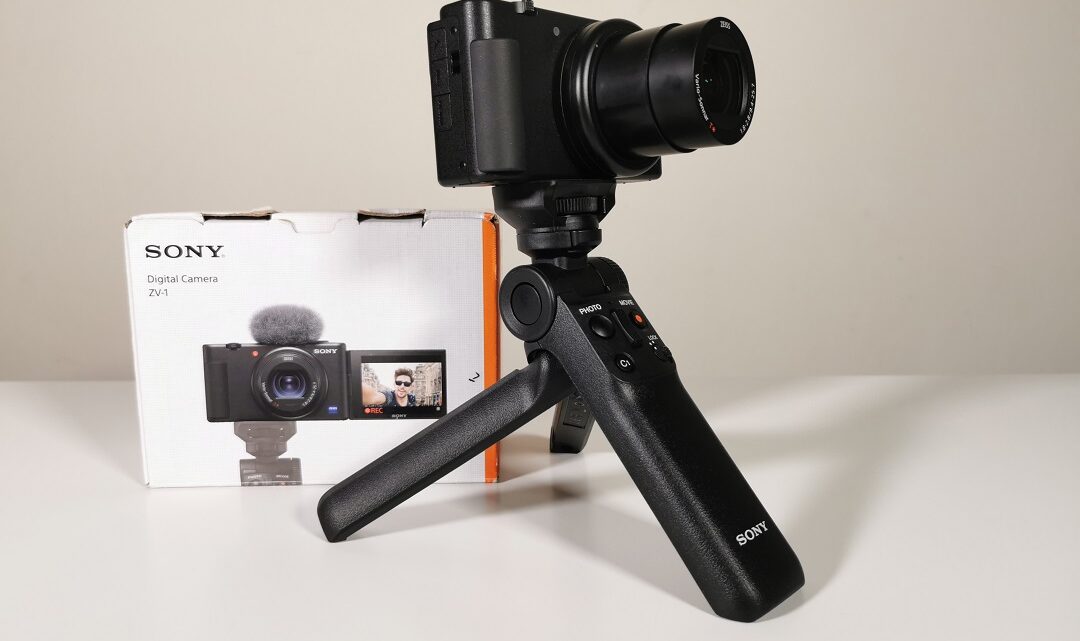 As many have noticed due to the pandemic of COVID19 and lockdown, the people, especially the younger generation have taken to online and creating memes, blogging and Vlogging. There has been an increase of consumers watching Vlog videos and even recording their own and posting on the various sites. As per datareportal.com, there is has been a 52% increase of viewing of Vlog videos and Sony decided to launch the Sony Vlog Camera ZV1 for UAE market around the month of July 2020.

Due to the COVID19, most of the brands took to online and introducing their products to the media and consumers. So same was done by Sony Middle East and later was sent the Sony ZV1 product for review for a week.
It is said 70% of the Vloggers use their phones for Vlogging and Sony is expecting to attract Vloggers with the new the Sony Vlog Camera ZV1 and the Sony Bluetooth Wireless shooting grip GP-VPT2BT. The major attraction compared to phone cameras is a 201.1Mp compact camera with new features which can entice the Vloggers to create more professional videos and better quality. The key focus of Sony is the design for video and vlogging.

The Sony ZV1 camera was sent in the package and along with was the Sony Bluetooth Wireless shooting grip GP-VPT2BT.
When you open the package, you will find the compact Sony Vlog Camera ZV1, Wind Screen attachment for cutting wind noise while recording outdoors, the Rechargeable battery pack NP-BX, micro-USB cable for the charging and leaflets (which contain the warranty and instruction manual.)
The Sony Bluetooth Wireless shooting grip GP-VPT2BT was not in any packaging as it came along separately.

The Sony Vlog Camera ZV1 comes with TFT LCD touch panel screen which is 3.0 inch in size and can do an angle rotation to 270 degrees and opening angle to 176 degrees.
The Camera uses the BIONZ X image processing engine and comes with SteadyShot for images and videos. It has Fast Hybrid AF, Single-shot AF, Automatic AF, Continuous AF, DMF and Manual Focus. As for focus areas, you have a choice of wide (315 points (phase-detection AF), 425 points (contrast-detection AF) Zone, Center, Flexible Spot (S/M/L), Expanded Flexible Spot, Tracking (Wide/Zone/Center/Flexible Spot(S/M/L)/Expanded Flexible Spot) and most important is had object tracking.

The GP-VPT2BT comes with the dimension of 49.5 × 173.0 × 42.0 mm and weighs 215 g. The It shooting grip can take weight load of 1.5kgs max. It can tilt Up: 80 degrees, Down 90 degrees and in Tripod mode Up 40 degrees, Down 90 degrees. It comes with Bluetooth connectivity with connects to various camera models and has record button for video and photo button, you can zoom, lock and C1 button which you can assign as your choice or use the preset in the camera. It is dust and moisture resistant. The grip has an easy rotation wheel, so you can turn the camera to 180 degrees and take a selfie too.

Due to the lockdown, I could not use the camera to the full potential and try out in the outdoors. But could study the camera and tried some hand on the device and I wished had it for a longer time.

The first glance of the look of the camera reminded me of the Sony compact CyberShot cameras but as when through in details it has more than just a point & shoot camera. The Sony ZV1 has a very similarity and can be compared to another Sony camera that is RX100 VII Compact Camera. The body size, features except it has more features for Vlogging.

As the camera is targeted to the Vlogging, the camera is capable of shooting 4K videos and also can shoot Full HD at 24FPS, 30FPS and 60FPS.
The interesting feature is the Real-time Eye AF tracking which makes very easier from the Vlogger to work with the proper focus of their face or the object which has been set for tracking.

Due to the touch panel screen, the vlogger can record selfies, get sharp focus which can be controlled automatically or manually. Zooming in up to 30cm and get focus on the product. They can also use the C1 button which already set to create a bokeh effect on a click of the button. This would be very handy while focusing on the small product or whiling shooting outdoors where you want the focus on you and not the surroundings.

Along with the video, the sound is a very important factor for Vlogging and the camera provides 3 options: the Sony’s latest Sound capturing built-in 3-capsule microphone on the top of the camera which has clear voice function that reduce the surrounding noise while making human voice clearer and with the fluffy Windscreen which can be added to the hot-shoe to cover the built-in mic and reduce the wind noise further.
You can use the standard 3.5mm mic port to connect an external mic. And 3rd option is the using of XLR mic via an adapter in the multi-interface hot-shoe.

For the Vlogger or videographer can also get both Log and Gamma control modes to enable it to produce footage that’s more suited to grading.
Vloggers sometime face the issue of lighting especially when they are on the move and with Sony ZV1 camera’s Face Priority autoexposure algorithm that can be activated to detect and prioritize the face in the frame. This should keep the exposure of the face the same while letting the background get lighter or darker depending upon the changing conditions.

The ZV-1 has a built-in ND filter to enable wide apertures to be used along with the comparatively slow shutter speeds required when shooting video. Helpfully, this filter has an ‘Auto’ setting that activates the filter when it’s required, but if you’re shooting video in a program, aperture priority, shutter priority or manual exposure mode you can’t use the auto option, you have to manually switch between on or off.

Sony ZV-1 comes with a ZEISS Vario-Sonnar T* 9.4-25.7mm f/1.8-2.8 lens. That means that the focal length is equivalent to 24-70mm in 35mm camera terms. That’s a handy focal length range that’s suitable for capturing a range of subjects, from landscapes to portraits.

With an aperture of f/1.8 at the widest point and f/2.8 at the longest, should enable the background to be blurred. Furthermore, there’s a new ‘Background Defocus’ feature, which by default is assigned to the C1 button. This is designed to enable inexperienced videographers to open and close the aperture for greater background blur/sharpness.

Background Defocus effectively puts the ZV-1 in aperture priority mode at the widest aperture and makes use of the shutter speed, sensitivity and built-in neutral density (ND) filter to deliver the correct exposure.

The camera has electronic stabilization, so while moving the lens is stabilized and combined with the onboard digital system. The ZV-1 looks quite a bit like a Sony RX100-series camera and it has a similar menu layout. The grip is quite nice to handle and especially in the selfie mode, however, the grip is still on the left side of the camera when it’s facing you. That means that it’s only useful if you hold it in your left hand and there are a lot of left-handers, but with more right-handers in the population, sony could have added the grip on the other side too. So, I presume Sony suggested and offers the GP-VPT2BT grip for ZV1 camera.

Sony ZV1 has another interesting feature called Product Showcase which is like object tracking. So, as you switch on the Eye AF tracking, the camera will obviously follow your eye and keep your face in focus but many of the Vlogger require to show some product and to get focus on the product with Eye AF tracking on may not be easy. With the Product Showcase on, you can track the object and keep the focus on it and then with a touch go back to your face.

The Sony ZV1 has a simple menu system which is very easy to access but there is an issue. The camera as a touch screen function but in the menu mode, it doesn’t work you have to use the dial and ok button to scroll the menu. Still don’t know why Sony could not add touchscreen function to the menu system?

The record button is big and easy to access but sometimes accidentally actives the recording. Another issue is the windscreen covers a little of the record button and sometimes need to look for it but course with practice, you can overcome this issue.

There is one concern which I could not test is the temperature on outdoor shooting, as your aware certain days in UAE temperature can reach up to 50 degrees and the camera said to work up to 40 degrees. Due to COVID19, outside trails had to be halted.
I was a little disappointed with the low light shooting images or videos, as the images had a lot of noise grains and optical and digital zooming was really bad.

Now let’s talk about the Sony Bluetooth Wireless shooting grip GP-VPT2BT. The GP-VPT2BT grip looks and feels very sturdy and comfortable to hold. It is designed for handheld and also changes to a tripod.

It connects to the ZV1 camera via Bluetooth but makes sure you read the instruction as you need to switch on two Bluetooth commands from the menu to connect the device for the first time.

Later on, as you switch on the camera and power up the grip, it instantly connects and ready to use. With the established Bluetooth connection, it becomes very easy for the Vloggers to control the camera directly from the button present on the grip, with separate Photo and Movie button, it becomes easier to click or record. With C1 button clicked on the grip you can go defocus mode within secs and no need to click on the camera and same goes for zooming button.

As it is Bluetooth connected if you want you to use the grip GP-VPT2BT as a trigger from a distance and activate the camera for image or recording.

For example, if you are doing interview or product from a distance and would like to do slow zoom while you are talking, you can have Sony ZV1 on another tripod and while watching the screen from a distance and using the grip as a remote trigger the camera to record and also zoom towards you or the subject.

The combination of the Sony ZV1 and grip GP-VPT2BT is the perfect combo for a Vlogger. The camera can record 4K with a simple operation which can background defocus, eye AF tracking and product showcase features which make the device perfect for Vlogging. The rotating touch screen which allows the user to see and click Selfie picture or video.

The sound capturing built-in 3-capsule microphone on the top of the camera was good but would prefer to use a lavalier mic or directional XLR mic especially outdoors. Usage during the night or low light, I was not happy with the quality of the images or video as it had a lot of noise and zoomed images was not good.

Also, the battery drains out faster when the LCD screen is kept on as the battery is small and worked for 40mins.
Personal suggestion: Try to use the camera during day time, if indoors or low area carry extra light or use lit up rooms.

The Sony ZV1 camera comes for a price of AED 3099 and GP-VPT2BT grip priced at AED 540. Both the products are sold separately and are available in Sony authorized retails stores and online partners. 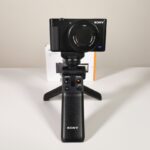 Continental Focuses on Producing of Special Tires for Electric Vehicles