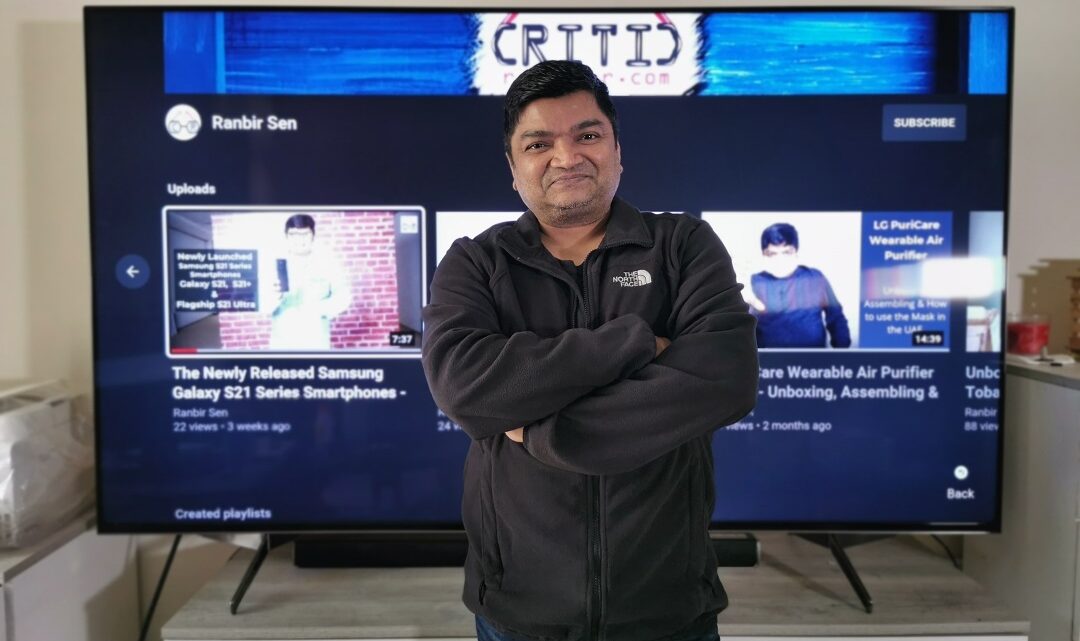 Sony as a brand has been well known for TV’s, Home Entertainment, Personal Audio and a lot more. In 2005, Sony introduced the logo BRAVIA (Best Resolution Audio Visual Integrated Architecture) which replaced the LCD WEGA for high-definition Flat- panel LCD Television. Sony BRAVIA introduced the Android TV series in 2016 and has been providing the latest technology and upgrades in the television range. In 2020, Sony introduced the new range of UHD 4K and 8K series of television for the UAE market which came with the 4K processor X1 chip and also 4K X-Reality PRO picture processing upscales every pixel for remarkable clarity.

Sony had sent the Sony BRAVIA X9500H – 4K (75inches) Television for review, this is one of the 2020 releases for the Middle East market and my first 75 inches Sony TV for review.

Sony BRAVIA X9500H television is a 75” screen size television and panel average thickness with a powerful audio system. The device has to be unboxed vertically due to sheer size and weight. The TV comes with the dimension of 1672 x 960 x 71 mm without stand and weighs 35.6 kg with a stand packed with the stand mount. There are three variants available in this region 55inches KD-55X9500H, 65inches KD-65X9500H and 75inches KD-75X9500H. It is a 4K LCD panel with Full LED Array backlight display and comes with a resolution of 3840 x 2160px.

The device comes with a sleek stylish stand which is mounted at the bottom of the TV and also creates space from the panel of the TV and to the floor base, this helps provide enough space for the built-in speakers to work properly and producing the range of sound.

The Sony KD-75X9500H can also be mounted on the wall with an additional WALL Mount which can be provided by the Sony or the retail team. As per my conversation with the installation team, you need to inform the retail outlet salesperson while purchasing the TV and Wall Mount and installation is given free of charge to the consumer.

The device comes with Standard, Cinema, Game, Graphics, photo, Dolby Vision Bright, Dolby Vision Dark, Netflix calibrated and custom, by which you can set up your own colour setting as per your preference.

The Sony BRAVIA X9500H series has a light sensor which optimizes brightness according to the ambient light of the room.

Generally, the Sony BRAVIA X9500H series comes ready with a setting which good for a general audience but for tech/perfectionist consumer, the device comes with a lot of options to suit to their needs.

The Television is a 60Hz LCD Panel with Full LED Array backlight and you can adjust the motion flow of the content with smoothness and clearness as per your preference. It also has cine motion which detects video of movies and other content and optimizes picture quality using IP (Interlaced- Progressive) conversions and frame interpolation.

The Sony BRAVIA X9500H series has HDR mode you have options HDR10 and HLG. Under the HDMI video range. It comes as Auto and you can go for Full dynamic range. Under the colour space, it comes as Auto but you can choose sRGB/BT.709, DCI, Adobe RGB or BT.2020.

You can now adjust the Smooth Gradation of the images by which you can reduce noise level that appears gradually and streaks in the graduation part of the picture. You can also reduce digital noise seen around the letters and compression noise, such as block noise. Also, can reduce the dot noise that tends to appear in the dark areas of the screen. There is also an option to enhance the detail of the video by performing Super Resolution processing and noise reduction while the software analyzing the picture in real-time. That can be done by the Reality Creation and done manually.

There is an additional level under x-tended Dynamic Range which further optimizes contrast by assigning the surplus power of darkened areas to bright areas using the local dimming. And you can still go further adjust the colour with controlling the Hue, Saturation and lightness

Another thing which got to my attention was good light uniformity. The screen has completely even light distribution across the entire panel, with no hint of shadow effects or specks. The same can be said of the colour reproduction, which is extremely smooth. Bright scenes in the movie or watching National Geographic it was a pleasing experience.

Even when it came to high-speed chase or fight action scene, the screen has no apparent trouble keeping up with the lightning-fast car chase or even with fast camera action movement. The motion equalization is very effective, without becoming artificially smooth.

The Sony BRAVIA X9500H- KD-75X9500H has a sleek built-in speaker which are enclosed in the back panel of the television. It comes with a full-range speaker which includes 2 (10W +10W) Bass reflex speakers and 2 (5W +5W) tweeters. The speakers are designed in downward and outward firing for a better effect of sound quality.

Sony has proven with great image quality and effectiveness of sound system makes a difference compared to its competitors. I was impressed with the Trebles, Mids and rumbling Bass of the speakers.

The best part of the audio was during the setup time, the TV comes with a built-in Acoustic auto-calibration software which optimizes the audio output of the TV speakers by measuring the listening environment using the microphone on the TV remote control. It takes around 5 seconds.

Generally, people who invest in such kind of TV would prefer to add a soundbar to the TV and I used mine (LG SJ4R – Wireless Sound Bar) to the TV but didn’t require to use it and as I was impressed by the TV speakers.
There was instance were audio from the speakers created surround sound effect and could feel the sound travel from left to right and sometimes even felt sound effect coming from distant (DTS Digital Surround
It comes with preset – Standard, Dialog, Cinema, Music, Sports, Dolby Audio and Dolby Atmos.

The Sony BRAVIA X9500H- KD-75X9500H comes with the Android Version 9 built-in which makes the operation very easy to access the menu, programs, channels and setting. It has Google Voice Assistant which can be switched on or off.

(Please note: When the Google Assistant is switched on, the TV keeps on listening to your conversation from the TV built-in mic and sometimes without any reasons, without pressing the voice activation button on the remote, the TV has listened and activated to search on the word spoken in the room.)

Once you connect, the Android OS will check for software update and provide the latest apps and Google Apps store page for you to download. The App Store has various apps which you can download and add to your menu bar. When I have received the TV, the Menu Bar already had YouTube, Netflix, Amazon Prime and more. Then you have Sony Select which already had Shahid TV and YuppTv. There are more local options available to download on the TV. As, it an Android TV, you can also download game apps from the Android Games, you can use the internet browser to view any content, you wish to see and if you want you can connect to Apple TV.

As for the connectivity, you have Wi-Fi Certified 802.11a/b/g/n/ac, 1x Ethernet input, Bluetooth 4.2 which connect to mouse/keyboard, AV remote and stereo audio which can be speakers or headphones.

It also comes with built-in Chromecast by you can project images and movies from your smartphones, computer and tablets. It also supports Apple AirPlay and HomeKit. It has RF input for cable connection, composite video input, 4 HDMI inputs which also includes eARC/ARC HDMI input. It has 2 x USB Type-A inputs (FAT16/FAT32/exFAT/NTFS).

The Sony BRAVIA X9500H- KD-75X9500H comes with the Sony AV Remote which makes a lot of difference with the experience of the TV. The remote which is connected with Bluetooth and you can control the Android OS all the functions of the tv which includes dedicated voice activation button. The Google voice assistant’s speech recognition technology has been working great and as the days of review progressed the TV’s AI was learning my voice style and would respond on an instant without delay and found 95% correct interpretation of my voice request. There was a little issue with understanding Hindi movie and song titles but later it would pick up certain words after a repeated request over a certain period of time.

The remote also comes with dedicated Google Play and Netflix Hotkeys which help directly switching on the app from the menu. The buttons are raised and it is easy to access the button just by finger touch.

The Sony BRAVIA X9500H- KD-75X9500H is priced at AED 8998.50 and is available at most the big retail outlets in the UAE and also available on popular e-commerce websites too.

My experience with the KD-75X9500H was really enjoyable. The colours of the images and video were vibrant, lively, and contrast ratio was great. The Black in the screen was really black which created the great contrast with the bright colours and even watching at close as 1 foot didn’t feel uneasy or a banding effect or pixels dots on your face.

As mentioned, the internal speakers are very good and especially the DTS surround sound effect. I didn’t require to use my soundbar system.
Accessing the content on the TV was very easy due to the Android OS and with the Sony AV Remote. The OS allows you to add the applications and comes with dedicated Google Play and Netflix apps and which also present as preset buttons on the Bluetooth remote.
The Google Assistant voice recognition software was great and kept learning as the time passed by but the issue of auto listening and AI software getting activated without pressing the button was a turn-off.

Another point which was little negative is the power consumption which is 247 Watts as it is due the big size of LCD Panel with Full LED Array backlight. As at price, consumer can option for LED Panel Tv which consuming’s less electricity.

The TV is little on the expensive side for an LCD panel with Full-Array LED display but for the consumer who wants 4K (75-inch size) with good built-in sound and with great features, it can be a sound investment.

Let me know your feedback on the article and if you have any questions, do write back to us. 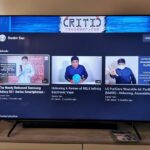