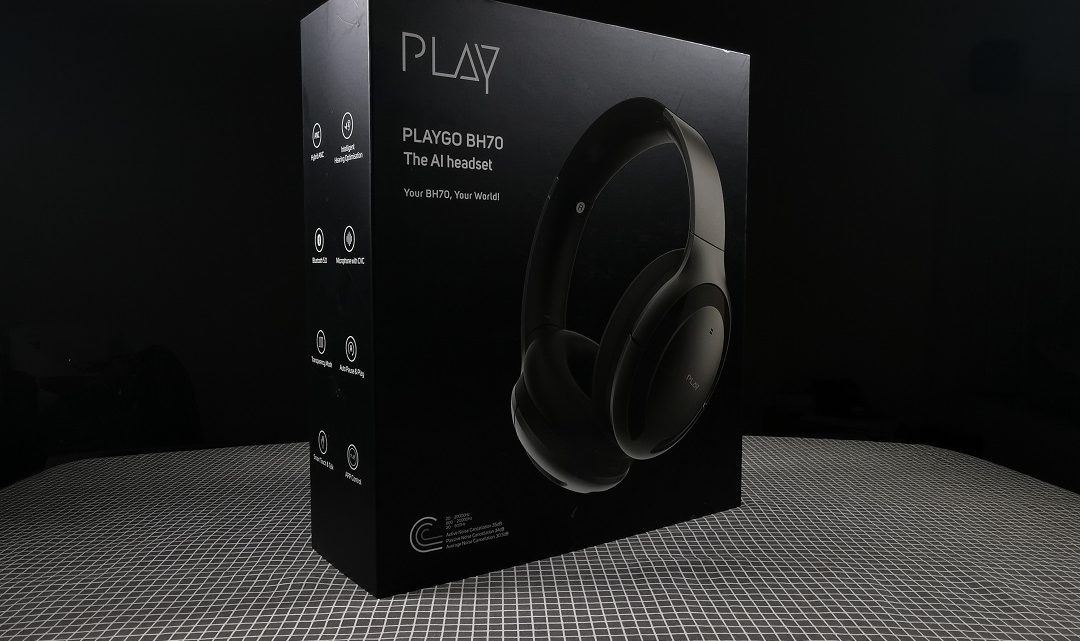 Recently got the new PLAYGO BH70 Wireless Headphone for review. V One Ventures Private Limited (PLAY), is a leading technology company headquartered in India, which capitalizes the latest digital technologies to create IoT devices in activewear and home automation markets. The company is supposed to have a powerful in-house research and development team, as mentioned to us, PLAY is focused on creating high-function, high-quality products and back them with unparalleled after-sales service. PLAY envisions to be a company which brings unique experiences to the day-to-day lives of its customers. 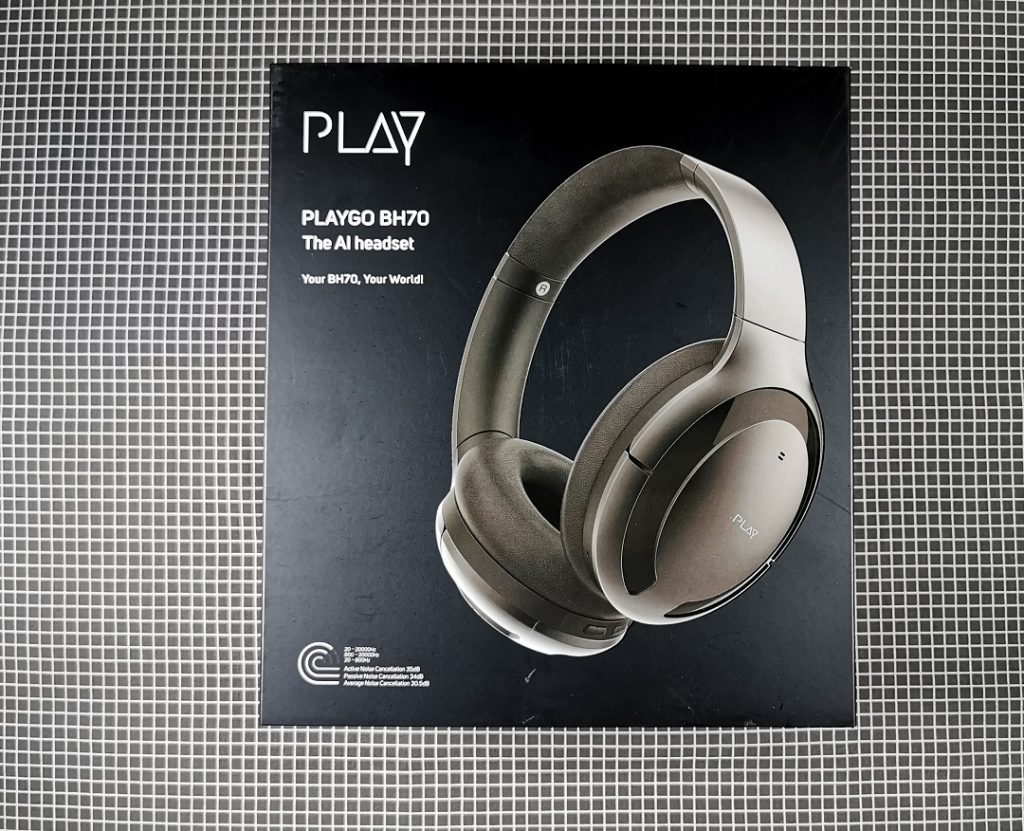 The packaging of the PLAYGO BH70 Wireless Headphone comes in black matt finish card paper sleeve with black cardboard rectangle box. Inside you have the black cloth material coated semi-soft zipped carry case which has the PLAYGO BH70 Wireless Headphone placed with a black elastic band and a netted pouch which is carrying the USB Type-A to USB Type-C charging cables. It also has a quick guide and warranty card. The device weighs 305grams. 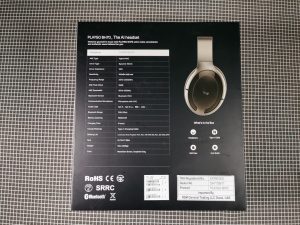 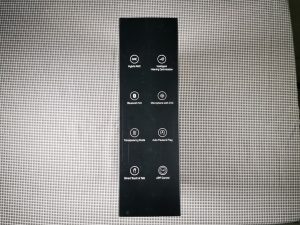 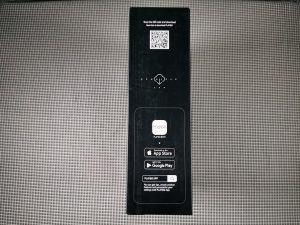 The PLAYGO BH70 Wireless Headphone comes with a dimension of 6.73 x 7.36inches and ear cups are made of a combination of 2 types of plastic – black piano finish with metallic grey body. The band is made of metal covered with same metallic grey & black plastic body and centre of the band is covered with PU leather with foam on the inner side for the comfort for the head. The ear cups can rotate halfway for placing the carry case. 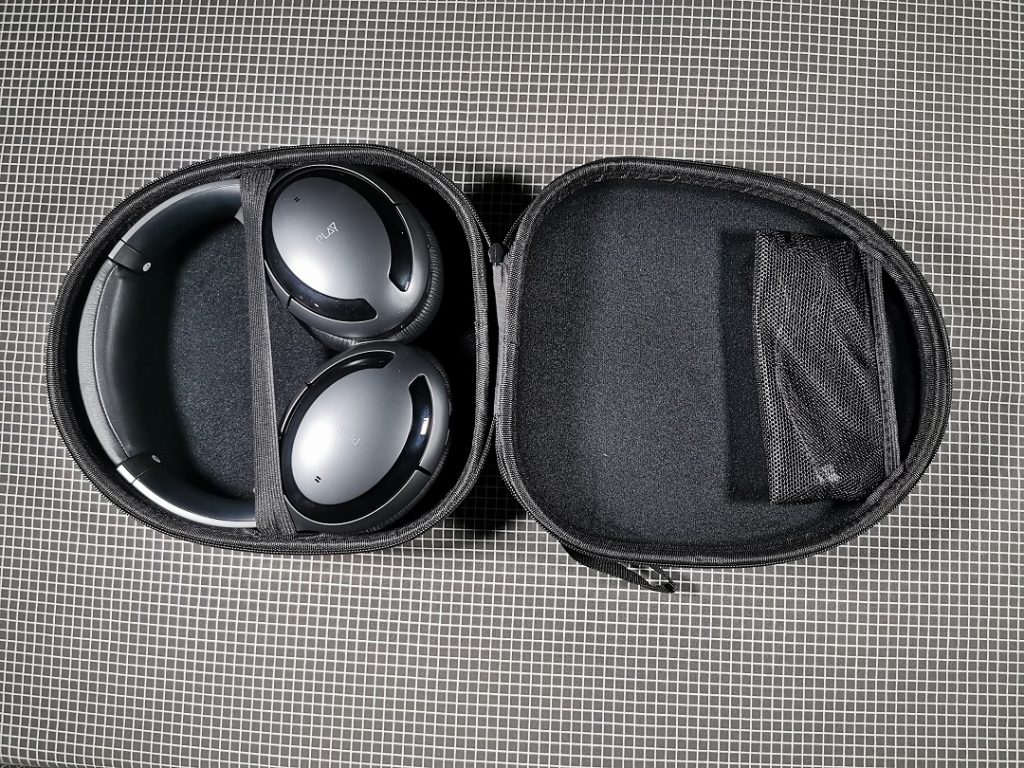 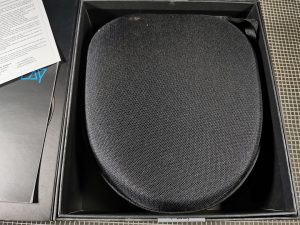 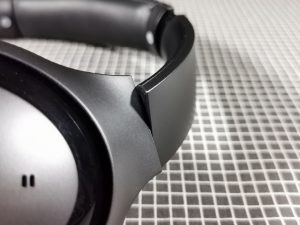 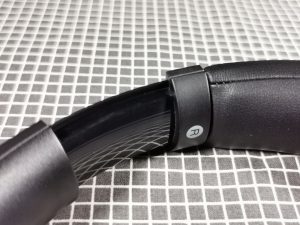 The ear cups design is semi-round pebble shape which gives the strength to the body and also helps with sound resonates in the ear cups. The headphone comes with dynamic 40mm drivers which are considered standard in the high-end quality headphones.

All the functions of the headphones are present on the ear cups. The left ear cup has the Power/Bluetooth connection button, ANC (Active Noise Cancellation) button and USB Type-C charging pin. The left ear cup also has touch function when covered with palm, the volume reduces for the listener to hear the surrounding sound. On the inner side of the left ear cup has an infra-red sensor which acts as a proximity sensor and this detects the headphone is worn and which allows the play or stop the music.  The right ear cup has volume – up and down buttons and pause button which also functions as Google Voice Assistant when pressing twice quickly. 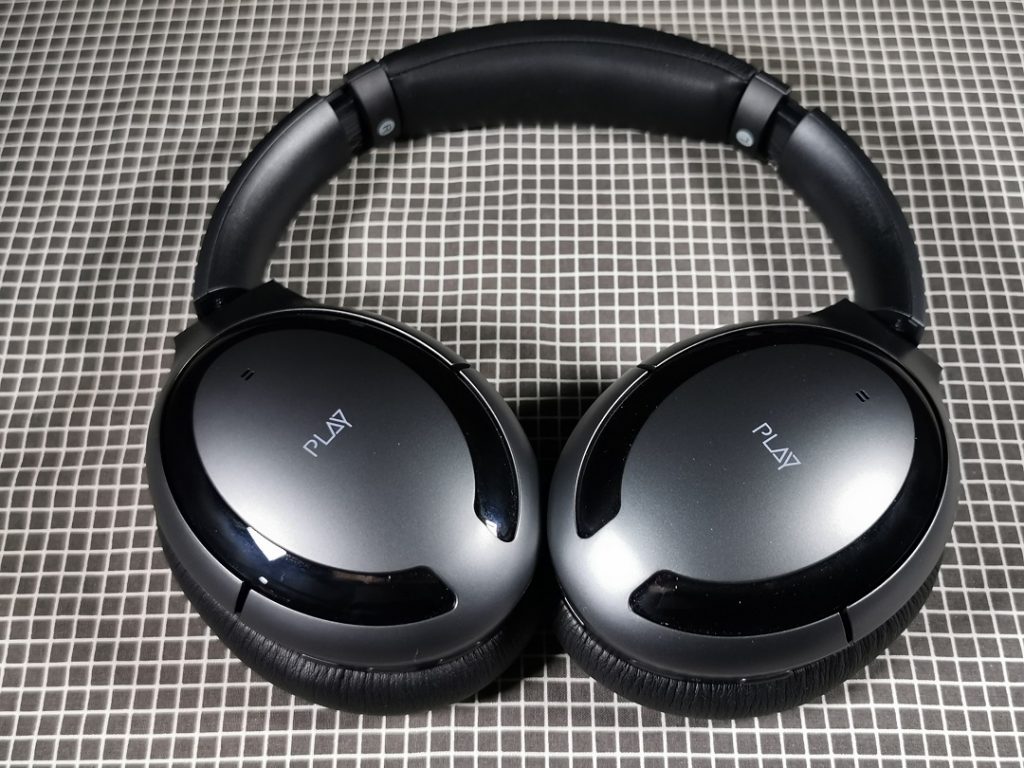 At the first glance of the wireless headphone looked like little plastic-type maybe of the glossy finish. But looks can be deceiving. I had charged the headphone for 4 hours as mentioned in the quick guide. (I always fully charge any new device before testing).  As per the quick guide, the single full charged battery is supposed to give continuous music playback time24h max (ANC-ON) and 30h max (ANC-OFF). The headphones come with 1000mAH non-removal battery.

The connecting the PLAYGO BH70 Wireless Headphone was very easy with Bluetooth 5.0. Just switched on the power button on the headphone which also acted as the pairing mode and Bluetooth on my smartphone, it showed very quickly and pairing was very easy. My first testing was directly connecting with smartphone music library and there were no issues and the sound quality was clear and had the rumble of the bass with clear mids and trebles.

As always, I have reviewed the headphones with various type of music to hear the range of the sound and check the delivery of the dynamic 40mm drivers and I was impressed.

For the testing and review, the PLAYGO BH70 Wireless Headphones was subjected to different kind of genre of music from Indian Classical, Western Classical, Rock, R&B, HipHop, Rap, Drum & Bass, Trance, Electronic and Ambient. It was also tested with FLAC and 24bit music. (Please note- Hi-res audio quality depends on the source of the sound and device to decode it, which is your chipset, software on the smartphone or player and with Bluetooth 5.0 support.)

The testing was done by downloading the PlayGo App from the Google Play Store. Under the App, there more different modes you can use. It has the ANC mode where you can use the Normal or Bus/train mode. On the right swipe, you have the option to adjust or use equalizer mode which has 4 additional preset mode – Rock, Jazz, Pop and Hi-fi. It also has a custom mode where you can adjust the sound as per your choice. Once you click custom mode, you have additional mode “Personal EQ” and on clicking you get a new screen which opens up horizontally and allows to adjust the Bass, Mids and Trebles. Here, you can play around with the sound curves to get your best sound liking to suit your needs.

There is an additional mode which the app calls it ‘Hearing Test Curve”. You have to follow the instruction to follow the test. You have to increase your smartphone and headphone volume to maximum and press start for the test. You will hear a very low sound beeps at different frequencies. If you can’t hear anything for few secs then click on the app’s headphones icon right or left ear and proceed to next frequency level and finally give you a rating on the quality of your ear listening power and equalizer also adjust according to the result and headphones output is supposed to adjust according to the test. This testing is supposed to help listeners to get the best audio quality with the AI-driven function in the headphones. But of course, you can readjust the equalizer as per your preference to suit your liking.

As per international study and my personal suggestion – please avoid listening to headphones on very high volume especially for Bass effect. Our human ears can adjust to sound level even you are listening on lower volume, our brain can trigger the ear to increase the sound intake and you will find the sound level perfect after a certain time. Listening on high volume can damage your ear canal and can create permanent damage to your ear.

The PLAYGO BH70 Wireless Headphones weighs 305grams but once worn on the head, it doesn’t feel the weight so much, as the headphone is well balanced. With the adjustment function of the band, the ear cups perfectly hold/grip the head. The big size ear cups perfectly cover both the ear which also helps to isolate the surrounding sound from the audio from the headphones. The ear cups have PU leather cover with foam which is very comfortable.

As there is the isolation of the ear from the surrounding due to fully covered ear and around-ear you may have a sweaty feeling. I would suggest, time to time, remove the headphone. 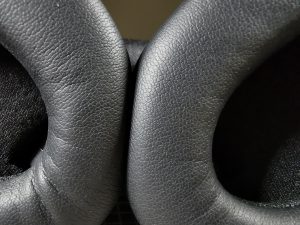 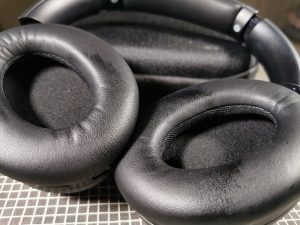 This problem persists with me for all the headphones with PU Leather. Also, in long-term usage, I have noticed this is a problem within all the brands’ headphones made with PU Leather ear cups, they intend to lose the PU Leather as it gets worn out and exposing the below cloth material.

Talking about the functions, as this headphone works with Bluetooth 5.0 technology and delivers the best sound frequencies from the source to the headphones and also provide better connective up to 30ft. The headphones worked perfectly across two walls within the 30ft of distance. There was no drop in the sound.

The PLAYGO BH70 headphone is equipped with five microphones, four mics are dedicated to constantly measure the noise signal and high-quality ear cup design that acts as a barrier for noise.

On testing the headphone on a telephonic call there was no issue hearing the caller. On checking with the caller, the sound was little low compared to the sound from the smartphone mic. Also, as you are wearing fully ear covered headset, you are not sure of the level of your voice and you need to get used to it which can happen on longer, regular usage.

The headphone has the Smart Touch & Talk function which activates when you cover the left ear cup with your palm, it detects human voices, increases their volume while temporarily lowering the sound of music. 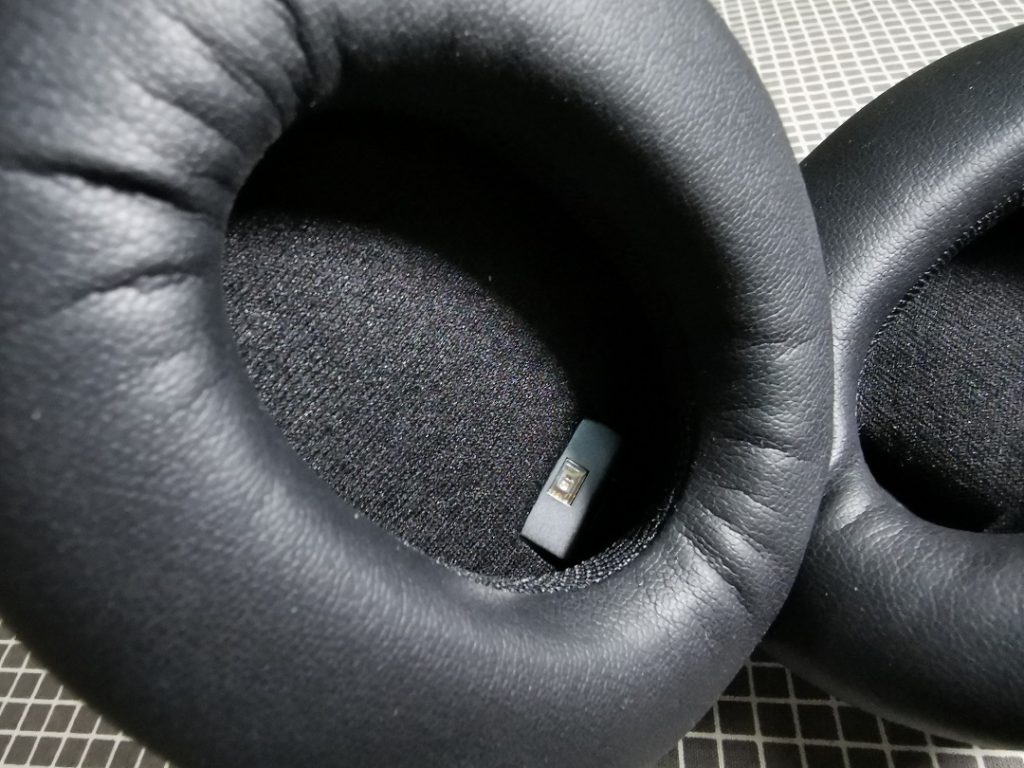 Another function of the headphone, if you remove your headphones off, the music stops. You put them on, it resumes. As the left ear cup has a built-in infrared sensor.

The left ear cup also has the ANC button which has three modes – Noise Cancelling Off, Noise Cancelling ON and Transparency. In the transparency mode, it allows the user to listen to the surrounding which is perfect while you are using in the bus/ train or walking on the road. 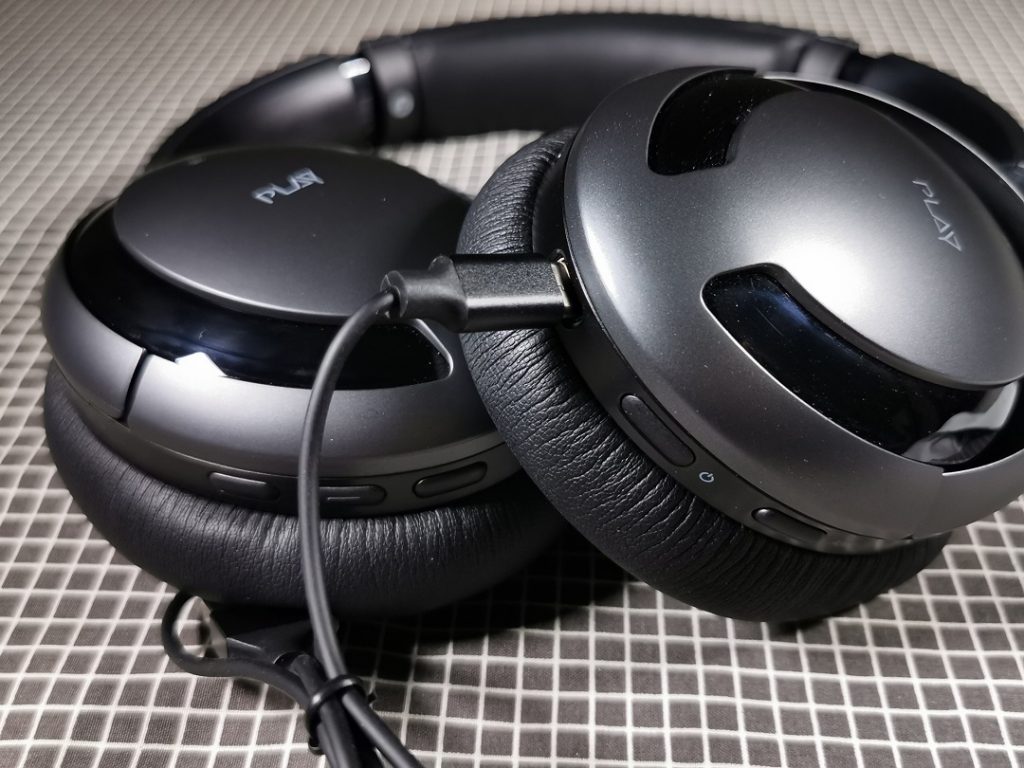 PLAYGO BH70 Wireless Headphones can play Qualcomm Apt-X, Apt-X LL, SBC, AAC audio code files as mentioned by the company. But the question comes back to the source of the sound/music which is the quality of file how was it compressed and smartphone chipset or software has the support to decode it properly and then transmit via Bluetooth 5.0.

If you ask an Audiophile listener, his preference will always be wired options or portable wired DAC player. So, he could get actual lossless quality audio which has been decoded and transferred via wire directly to the headphones. One of the reasons the Audiophile listener spend a good amount of money to buy the equipment like a stand-alone player, DAC and cables to connect to speakers and even to headphones.

The PLAYGO BH70 Wireless Headphone is very good Bluetooth headset but it lacks with 3.5mm jack input, to try a wired connection with DAC player.

Are Headphones / Earbuds good for Exercise or workout? 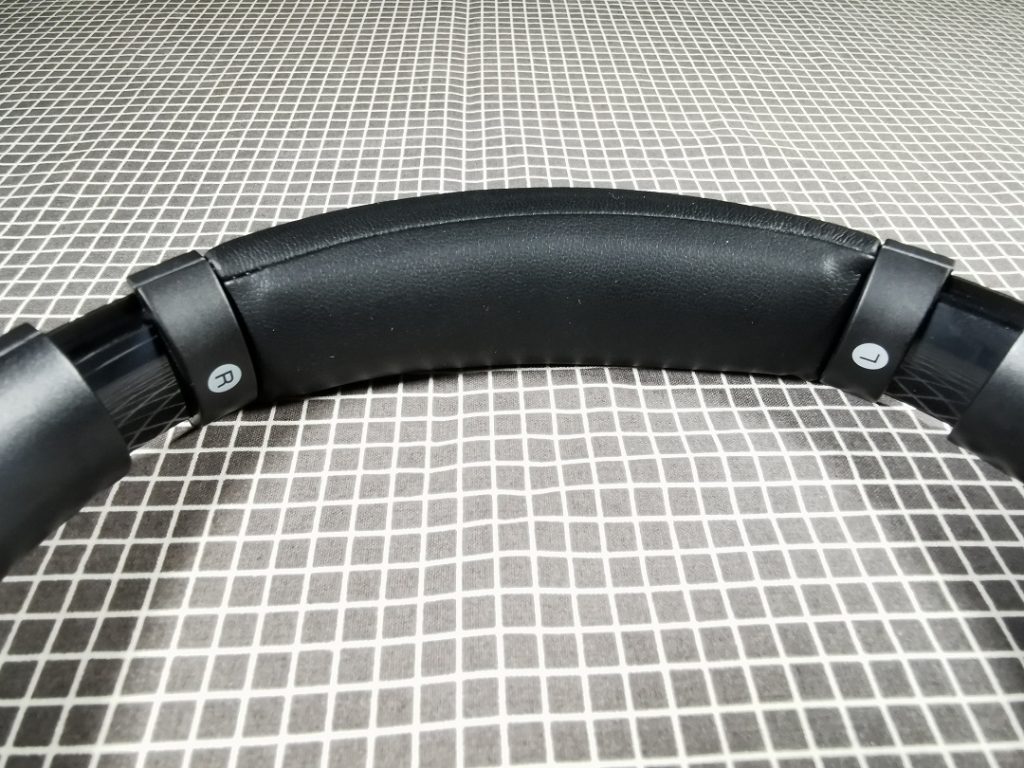 The PLAYGO BH70 Wireless Headphones weighs 305grams and that is additional weight on the head while you are working out. Also, it is not waterproof or water-resistant. You can use it indoor for doing easy exercises like breathing or stretching which does not make you sweaty.  Sweating on the head or near the ear which enters the ear cups and may damage the audio drivers and the infra-red sensor.

(Personal Suggestion – Please don’t wear any kind of headphones/earbuds during an intense workout which totally covers or isolates your ear and doesn’t allow to air to get into your ear. Firstly, your ear helps to maintain the balance of the body, so any total isolation may create unbalance or possible blackout. Secondly, use headphones/ earbuds with a low volume of sound, so you are aware of your surroundings especially outdoor.  Thirdly, keep the volume lower the 75% of a level, as human ear adjusts to sound frequency. All doctor advises to avoid loud levels of noise to prevent ear canal damage.)

The PLAYGO BH70 Wireless Headphone is a great product for the price, styling and sound quality. The features which make the device interactive is the palm cover function on the left ear cup for interacting with the surrounding, you have 3 ANC sound mode with 4 built-in mics for noise cancellation and has google assistant function. It makes the perfect companion for your smartphone for the people who like to listen to music or talk for long time hands-free, as it has 24 hours battery life on a continuous play of music with ANC On.  With Bluetooth 5.0, you get a better connection up to 30ft range and quality sound which also supports Qualcomm Apt-X, Apt-X LL, SBC, AAC audio code formats. I wish the headphone also had 3.5mm jack for wired option.

“The PLAYGO is a new brand in the field of wearables and music devices and BH70 Wireless Headphone has delivered the right quality of sound with great price and music connoisseurs should tryout this headphone if you are not a brand-oriented person. “ 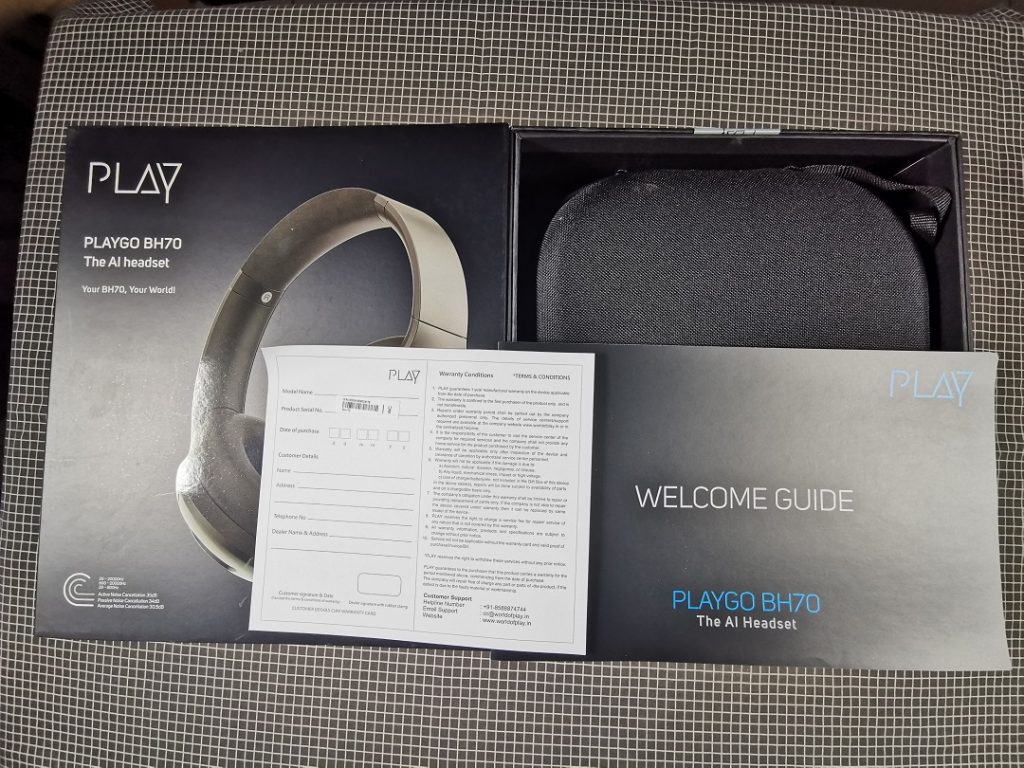 The PLAYGO BH70 Wireless Headphones comes in a black box with a sleeve with black carry case. The carry case contains the BH70 headphone and USB Type-A to USB Type – C charging cable in the pouch, Quick Manual and Warranty. Also available in medallion brown colour 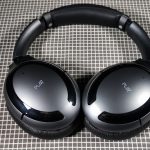