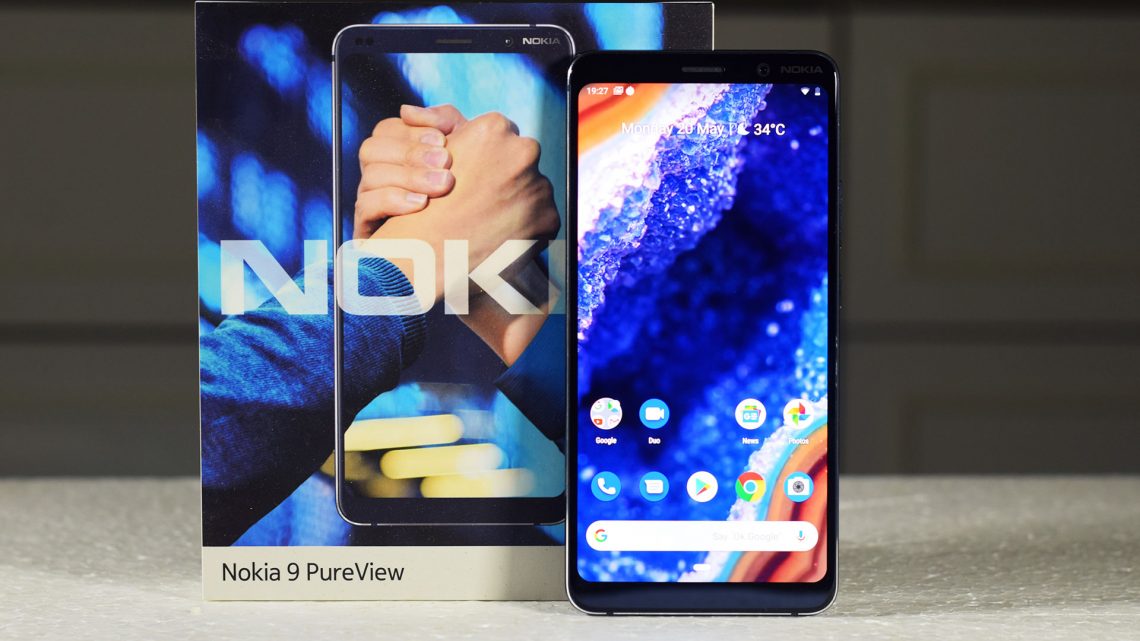 On 29th February HMD Global, the home of Nokia phones, today announced four new Android smartphones, including the world’s first smartphone with a unique five-camera array, the Nokia 9 PureView. After much waiting, got the Nokia 9 Pure View smartphone for review and have used it for more than a month. 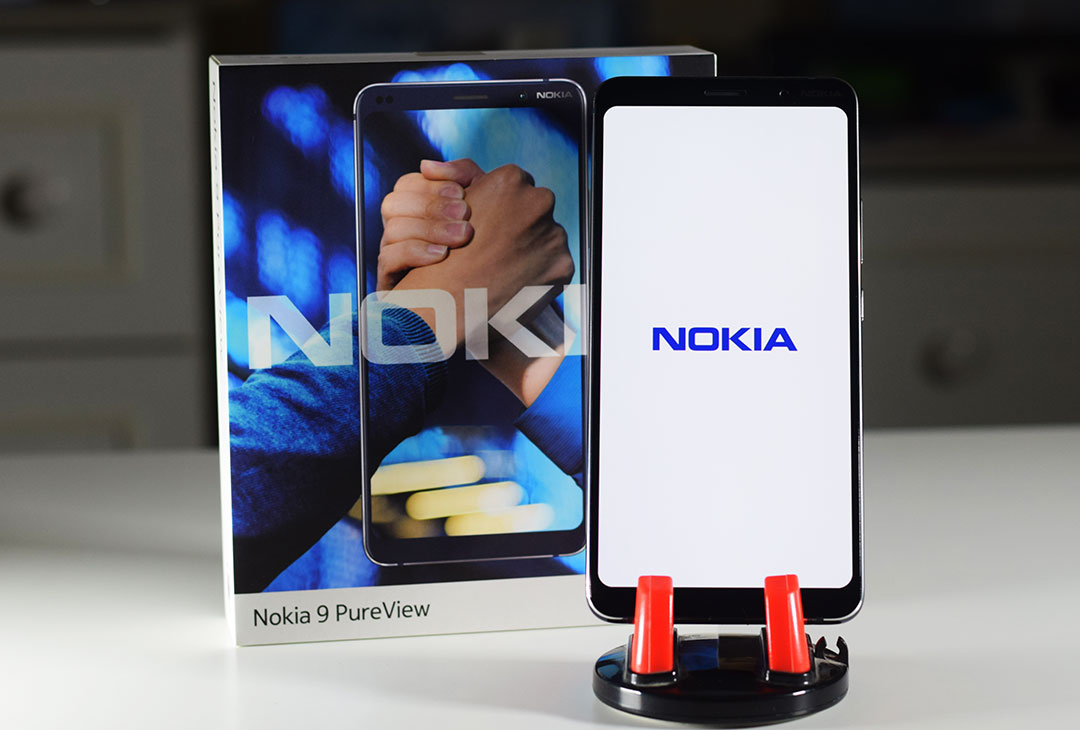 With a dimension of 155 x 75 x 8 mm with a display, 18:9 screen ratio (no notch) and weighing 172gms which includes a non-removal battery, it is a very sleek and stylish smartphone with rounded edges to fit in your hand. The body of Nokia 9 has front and back Corning® Gorilla® Glass. The body frame is made out of 6000 series Aluminum with dual anodized diamond cut coloured edges further accentuate the detail and refined looks.

It has 5.99 ” FHD+ 19:9 w/ notch with a resolution of 2880×1440 pixels. HM Global has partnered with Pixel works for the HDR, the display allows to view SD display converted to 16bit conversion into HDR10-capable P-OLED 2:1  display which enhances the brightness and contrast for a vibrant display of videos and images. The display is very sharp and crisp, Maximum brightness was measured at 641 nits on average (675 nits maximum) with enabled ambient light sensor, and brightness distribution was a decent 92%. 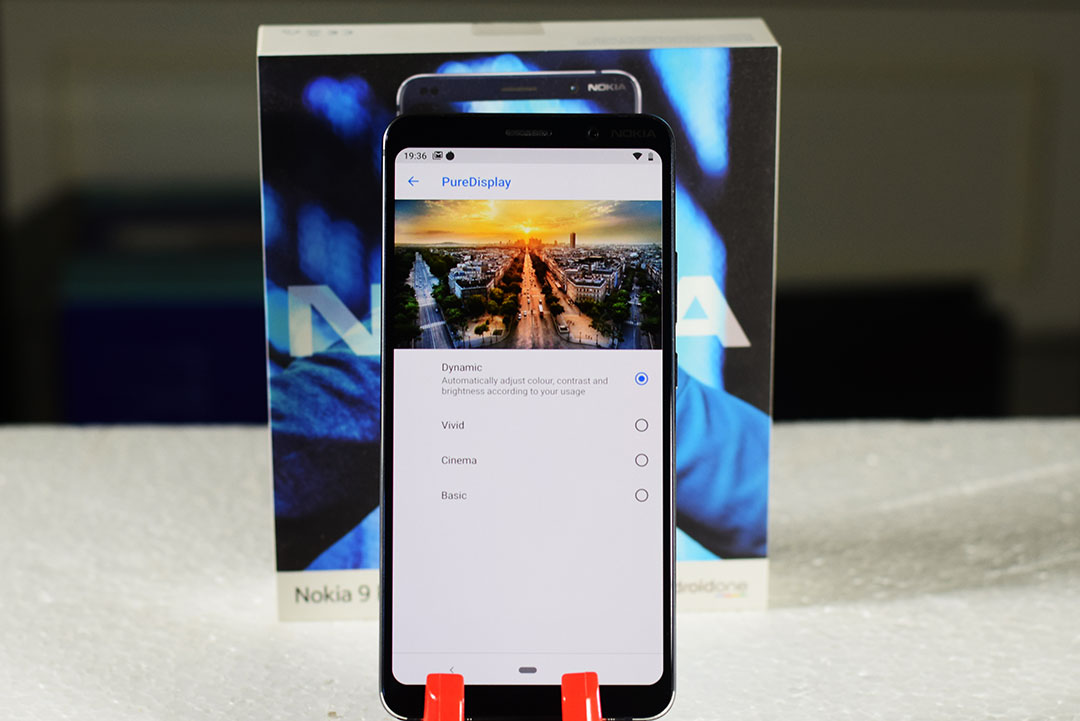 The Nokia 9 PureView supports a feature called “PureDisplay” for improved colour accuracy. The settings can be found in a menu with the same name. By default, the “Dynamic” setting is selected and colour, contrast ratio, and brightness are dynamically adjusted based on the screen content. 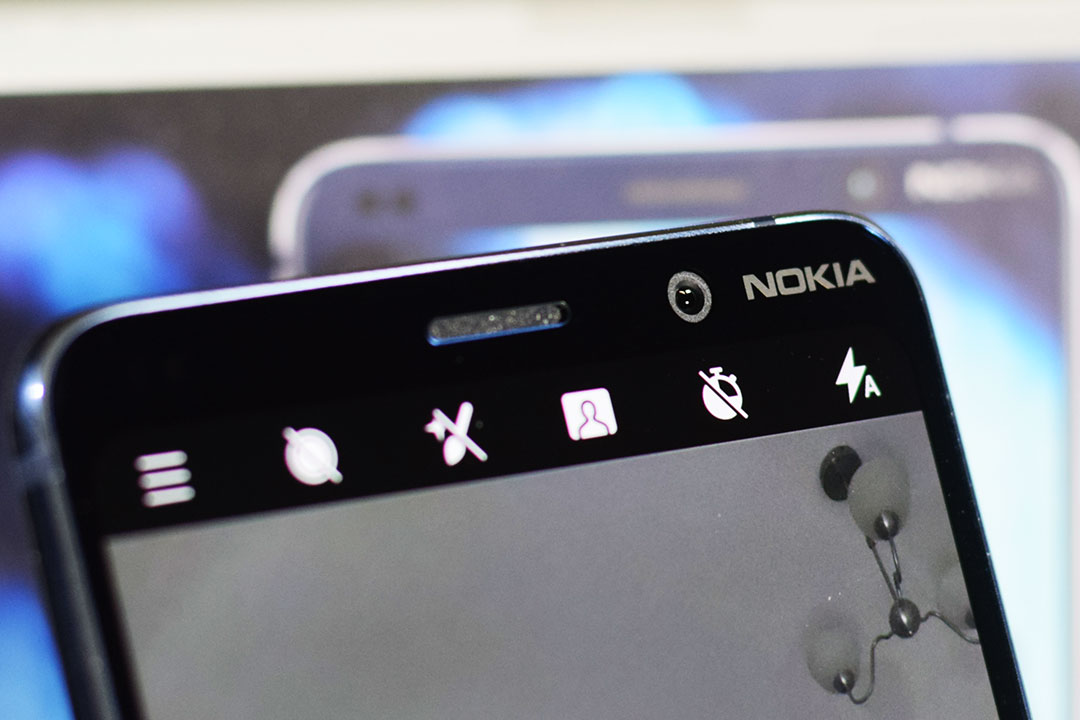 It comes with Active noise cancellation with dedicated mic and for input, it comes with 3.1Type-C 1.0 reversible connector. It has got a fast battery charging 18W (Quick Charge 3.0). It comes with Non-Removable Li-Po 3320 mAh battery

It has got a fingerprint sensor under the display.

The Nokia 9 PureView comes with 6GB RAM with 128GB ROM and has got Qualcomm Snapdragon 845 Chipset with Adreno 630. 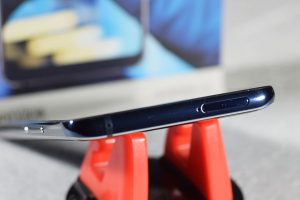 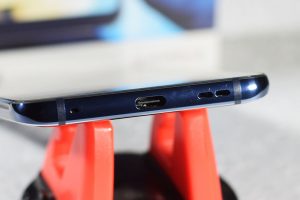 The Nokia 9 PureView is the flagship model phone with all the features of the high-end smartphone. The Nokia 9 PureView packaging is similar to all the similar Nokia smartphones released recently like the Nokia 7.1, Nokia 8.1 and others. Once you open the box, you will the Nokia 9 wrapped up in transparent sleeve, below the smartphone, you have box with Electric plug, USB Type C cable for charging and transfer of data, a pair of earbuds with 3.5mm jack pin, USB Type C to 3.5mm jack Adaptor and it comes with manuals. The only thing missing is the transparent safety back cover.

The Nokia 9 smartphone frame made out of 6000 series Aluminum with dual anodized diamond cut edges gives very rich classy looks compared to many of the smartphones with dual colour panels. The Nokia 9 has a blue glossy back panel with Corning® Gorilla® Glass. 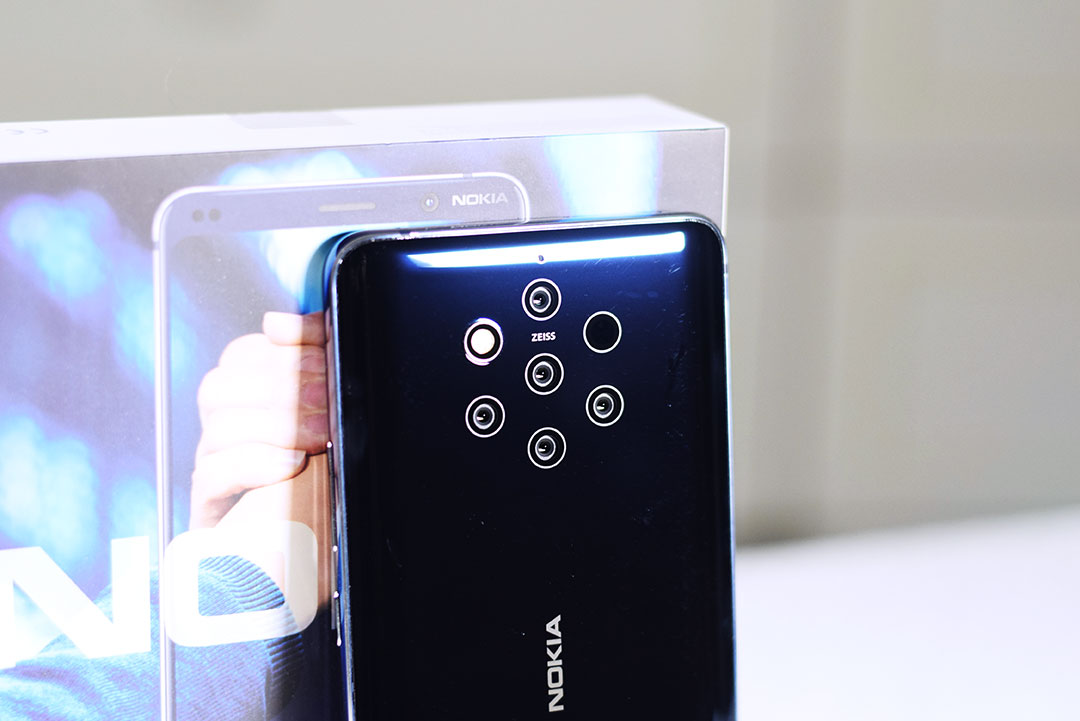 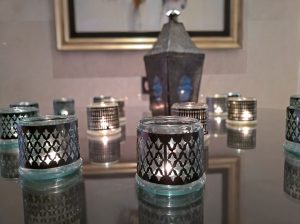 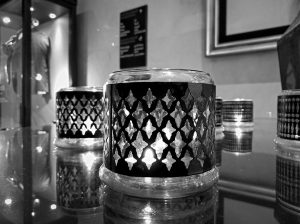 When releasing the shutter button all five cameras snap a photo simultaneously, and the software applies various settings automatically. Once applied, all five photos are combined into a single 12 MP large HDR photo. Videos are recorded in 4K at 30 FPS. The front-facing camera offers the same video resolution and features a single conventional 20 MP sensor. 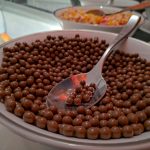 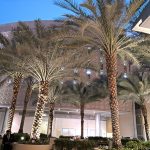 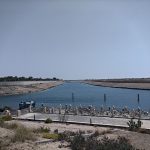 The combination of five separate cameras has some additional benefits for professional photographers. the Nokia is capable of capturing and saving RAW files (DNG) instead of JPEGs, which can be then retroactively developed on the phone itself or on a PC and with the new update you can save Lightroom extension and open up on Lightroom software and change the RAW images exposure, white balance, etc. 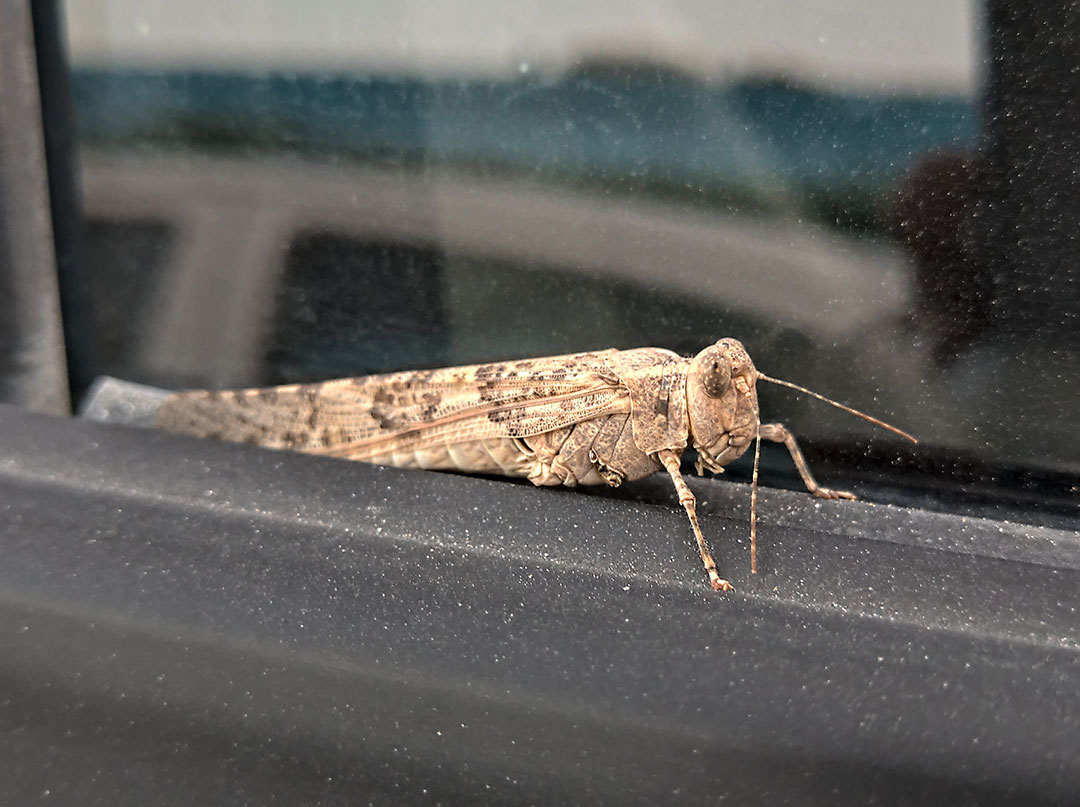 Clicked_with_Nokia9-PureView- Detailing & Depth in the image

The image holds much more data than a typical JPEG file. In addition, it captures up to 1,200 levels of depth, which not only allows for astonishing Bokeh effects but also enables you to change a photo’s focus retroactively in Google Photos. For example, many cameras have issues with shadows, which are usually strong on sunny days but in Nokia 9, you will be able to see layers of shadow to make it look natural. 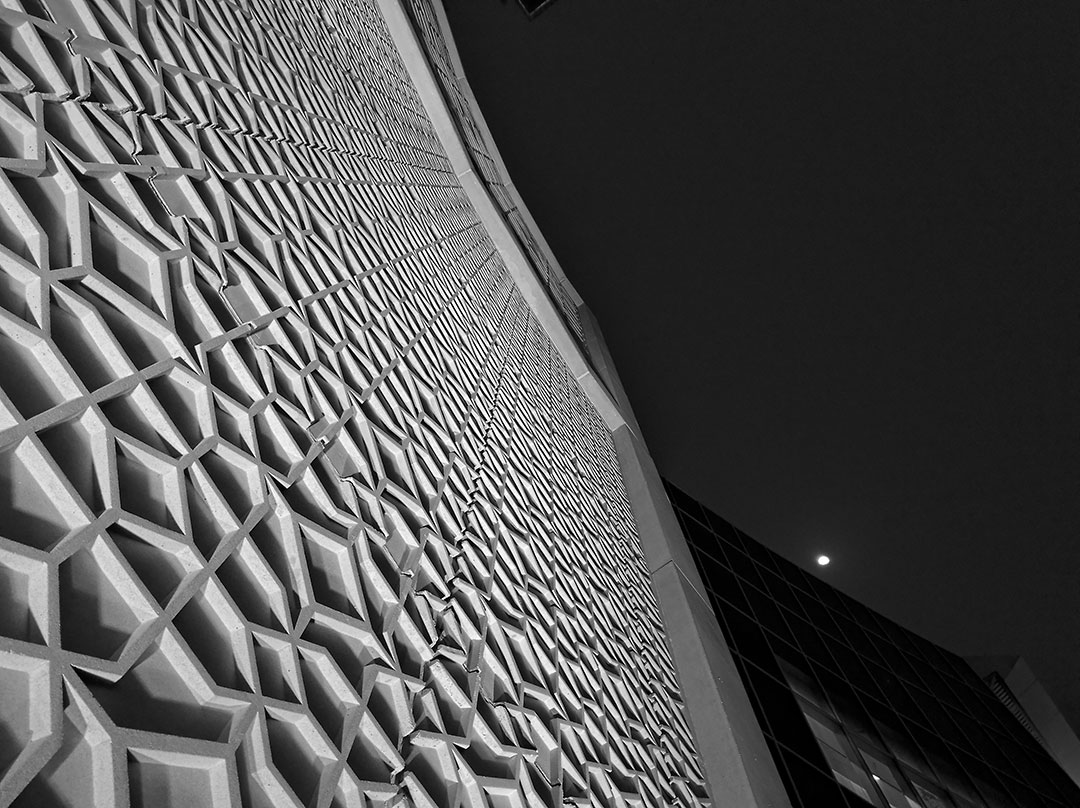 HMD worked with Qualcomm, Carl Zeiss, and Light to make it all work. HMD says the monochrome sensors each capture 2.9 times the light of the full-colour sensors and together can bring nearly 10x more exposure data to the equation.

When an image is captured, depth, contrast, and exposure data are handed to the Qualcomm Snapdragon 845 processor, which has been tuned by Light.

Many of the other smartphones tend to make colours more vibrant and bright. It makes for a nice effect, but I believe the Nokia 9 PureView managed to capture more “true-to-life” hues. Colours still look deep, but not over-processed. White balance is also nicely measured. 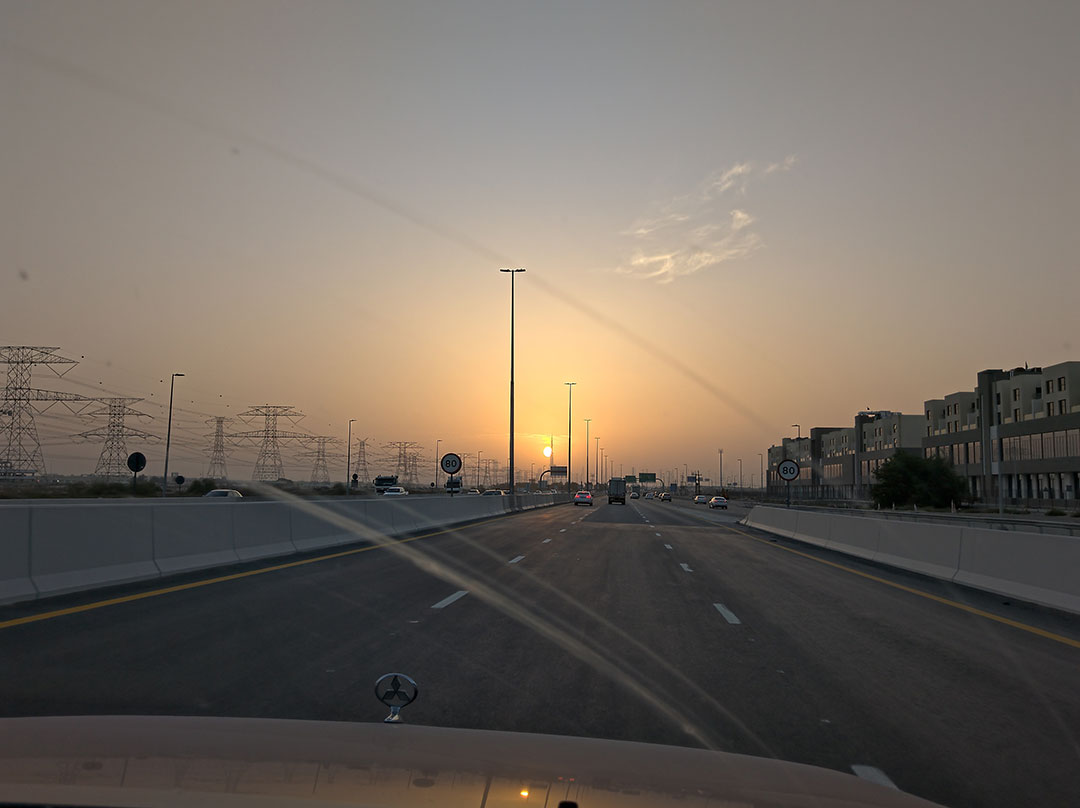 The Nokia 9 PureView’s low-light images look pretty good from afar. Exposure, white balance, and colours are nice. When you look deeper and there is quite a bit of softening applied by the phone’s software, likely to remove noise. But again it much better than many of the smartphone, I have reviewed.

On simple swipe, you can directly to Pro camera mode where you can control the ISO, white balance and shutter speed function. This comes in handy if you are planning to click long exposure shots especially in Low light condition (Tripod stand suggested). You can click HDR images which bring out crisp, sharp images with HDR. 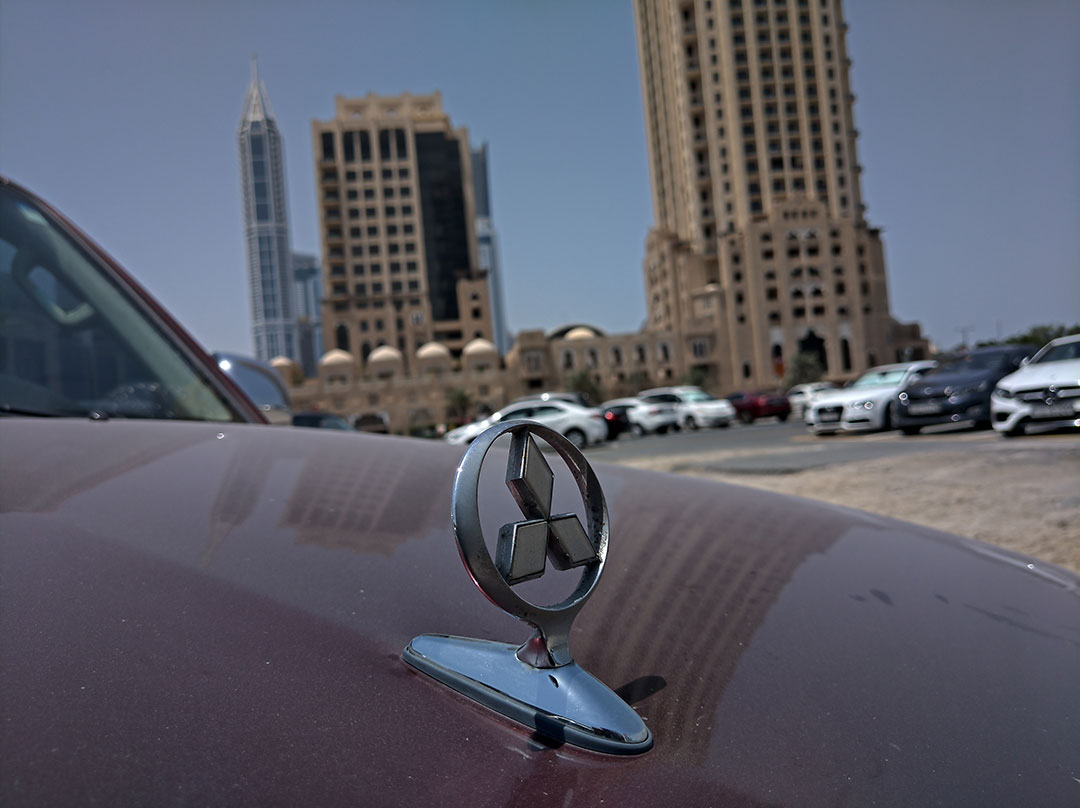 One of the interesting features which have always been my favourite in all the Nokia phones is the #Bothie mode. Now in the Nokia 9, there has been an upgrade which made #Bothie function more appealing. Compared to the earlier version, under the #Bothie mode, you can split-screen which shows the primary rear camera image and front (Selfie) camera at the same time in equal split screen. Now you can change the split-screen size as per your requirement and also move the screen as you desire in PIP mode (Picture in Picture). And all this you can do Live on Social media with #Bothie mode.

Nokia 9 smartphone UI has built-in AI function which off course thanks to Google Android upgrades. Now you can use Al filters for photography and video. An AI-enhanced front-facing camera which introduces facial recognition to deploy animated 3D personas, masks and filters. 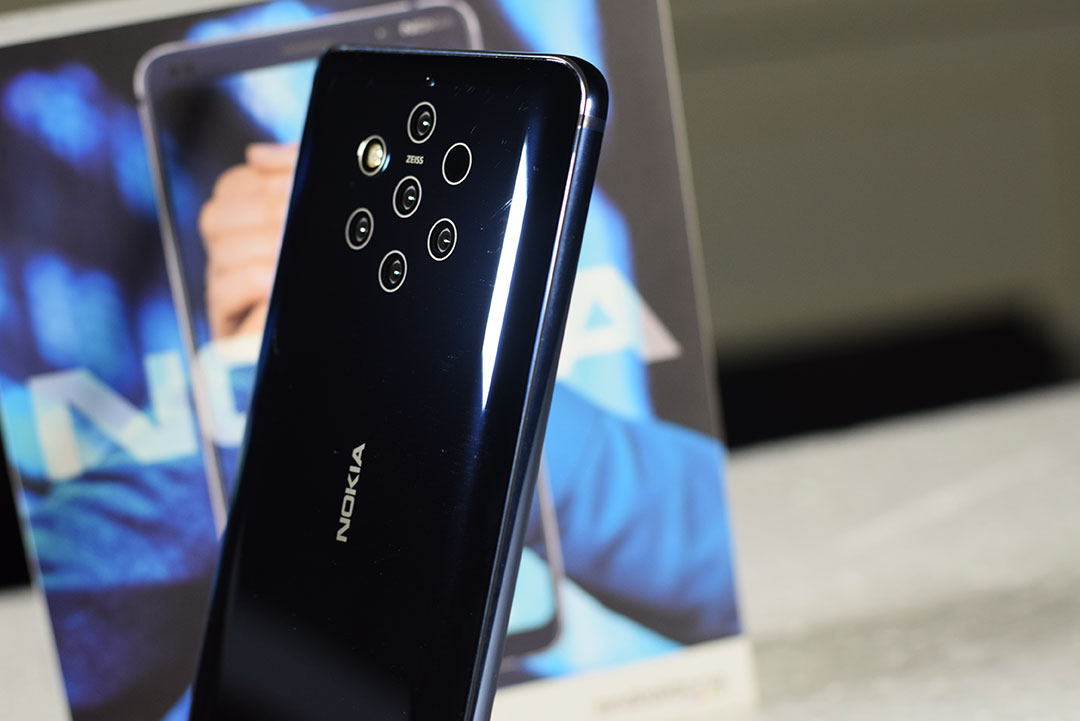 The Nokia 9 comes with Qualcomm Snapdragon  845  chipset with Android Pie  OS and Android One UI, so any update from Google Android, it will come directly to the user. It has got 6GB RAM with 128GB ROM with dual SIM Card Tray and with microSD support up to 400GB.

The Nokia 9 will receive three years of monthly security patches and two years of OS updates, as guaranteed in the Android One. Google Play protect scans all the apps on the store and on your phone to keep it safe from malware.

The battery of Nokia 9 is non-removable 3320 mAh battery which has adaptive battery control for long-lasting of 19 hours of battery life in one charge. Nokia 9 has USB Type C pin with 18W fast charging which can deliver up to 50% of your battery back in 30 minutes. 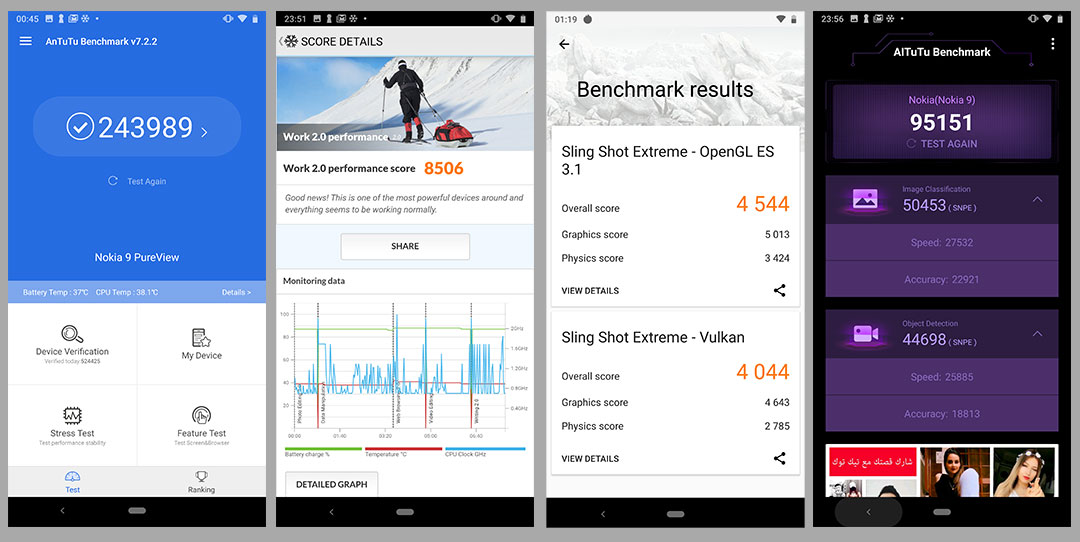 On Benchmark test on Nokia 9 performed average with AnTuTu score – 243989 and 3DMarkAndroid score (Sling slot extreme OpenGL ES 3.1 – 4544 and Sling Slot extreme Vulkan – 4044).  Also on PCMark Benchmark, it scored 8506. Nokia 9 graphic rendering was smooth during the AnTuTu and 3DMarkAndroid test, there was no jitter or delay. The sound quality was better than average during the test. Checking for the AI used the AiTuTU benchmark and Nokia 9 scored 95151.

During the test, the temperature reached around 44 °C which was quite high and could feel the heat on the back panel of the device. 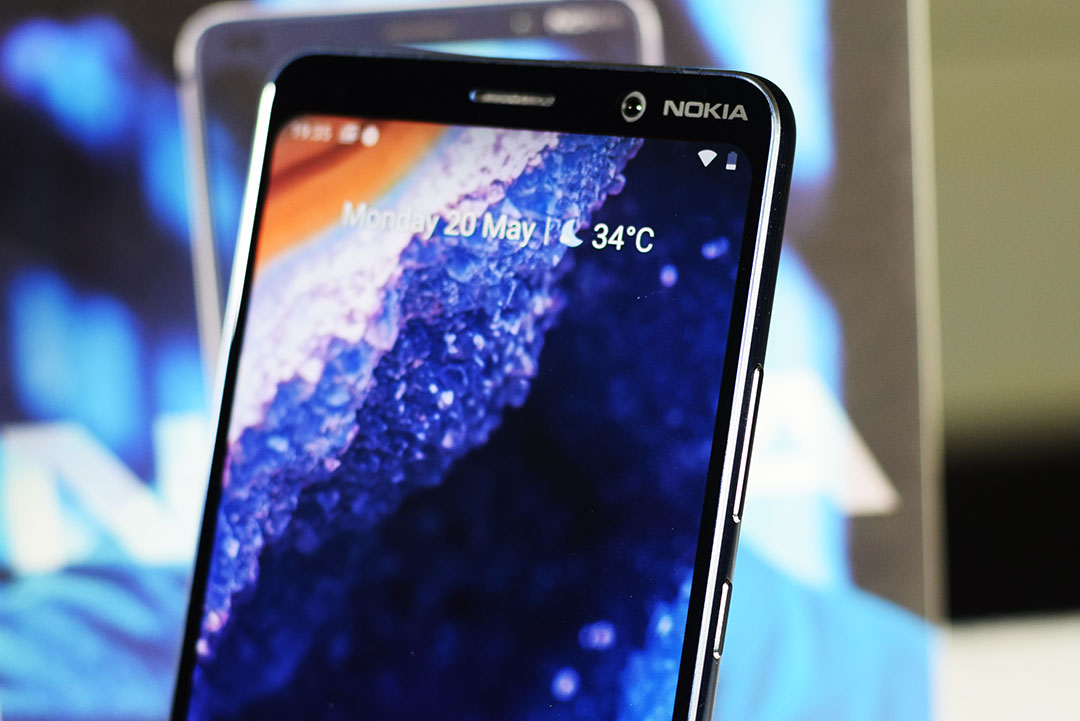 Nokia 9 is very well designed, a slim, sturdy, smartphone which latest features like in-display fingerprint sensor, 5 cameras. With the unique 5 Zeiss lens camera setup and HDR capabilities, you can click a crisp, sharp image with EIS function. The images clicked with the camera quite close to “true-to-life” hues and especially the shadow numerous layers.

Even with the device has got the latest Android 9 (Pie) with 6GB RAM and 128GB ROM and Snapdragon 845 chipset with Adreno 630, the downsizing of the device is the sluggish software especially interacting with the 5 cameras combining all the 5 clicked images into one image. The time taken from clicking an image and reviewing it on the device’s screen took around 5secs. Otherwise, the Nokia 9 device is a great device.

The new #Bothie worked perfectly fine and capturing moments better especially videos and you can now you can control the split-screen and change the size of the screen and user can give the prominence to the primary camera or the front camera. Nokia 9’s non-removable 3320 mAh battery good for one full day charge with heavy usage of talking and chatting and can get 50% of your battery in 30 mins recharge.

Nokia 9 could be a perfect smartphone for business people, social media buffs/influencers and people who want a stylish phone in their budget. 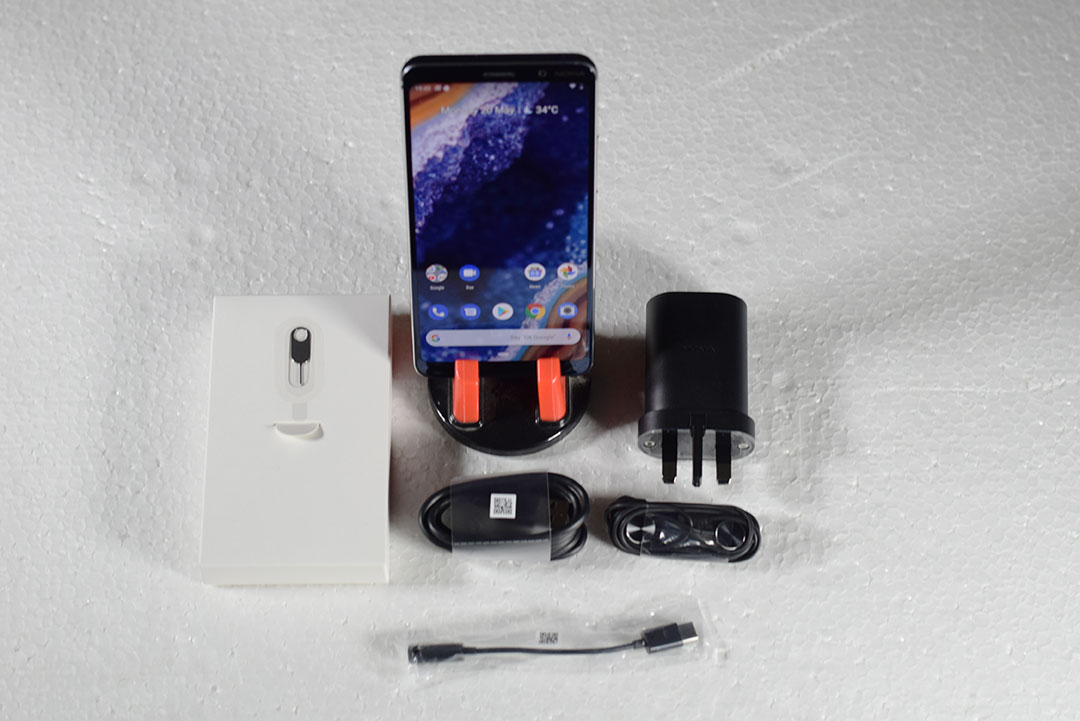 Nokia 9 PureView is available with all the leading E-Commerce websites and on Nokia Website for AED 2299 and available only is a blue colour. 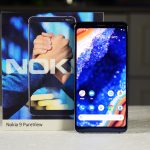