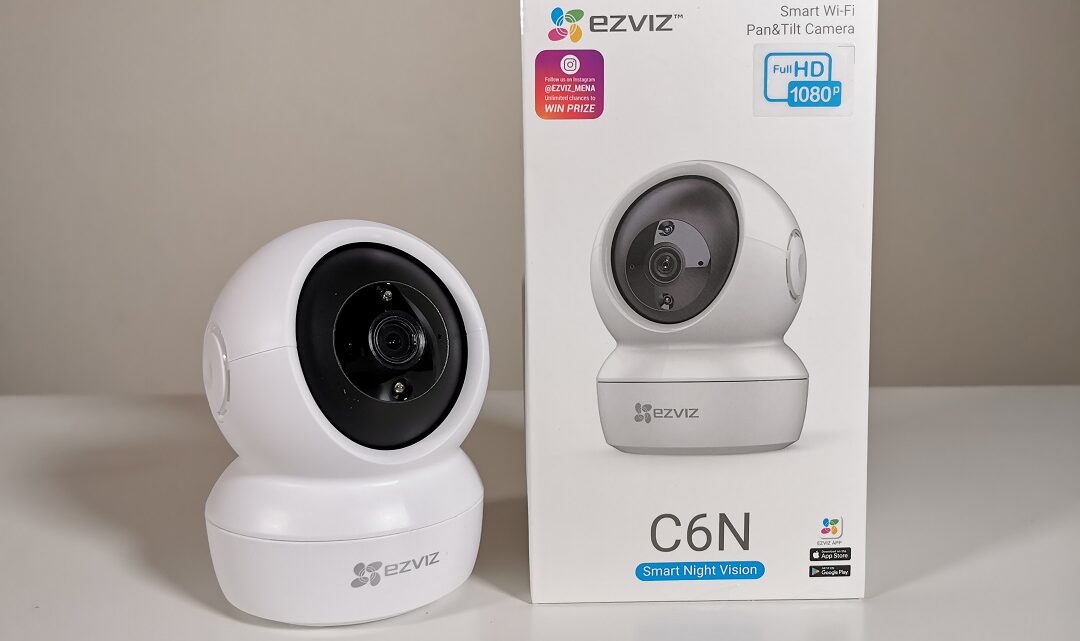 2020 has been a year of lockdown and across the globe, many places government has enforced the “Stay at Home” directive. Many

When it comes to home protection, there have been several brands who have captured the limelight among the consumers. With the new emerging technologies, IP based cameras are no more just for the offices, warehouse or any commercial complexes. There has been a surge of wireless devices across the market and at an affordable price which includes CCTV cameras, wireless cameras, IP based cameras are now at the reach of the consumers.

Established in 2013, EZVIZ has been providing intelligent devices, cloud-based platform, and AI technology solution for the homes and commercials. We heard about EZVIZ in the UAE in quarter four of 2020 with PR agency sending us information about the company and products. We have received the EZVIZ C6N Smart Night Vision Indoor Wireless IP based Camera.

EZVIZ C6N is a small, lightweight indoor Wireless IP based motorized camera which can be controlled via EZVIZ app. The App is available on the App Store (IOS) and Google Play Store (Android). The device is made of ABS plastic with a motorized camera. It has LAN and micro-USB ports on the device. The device comes with long (appx. 3Meter) power cable with micro USB pin on one side and USB Type-A port. This cable gets fixed into the USB Type-A port on the electric socket.

The EZVIZ C6N device comes in a white rectangular box with mention of Full HD 1080 mentioned in blue colour and on the left side mentions of all the features of the device. Once you open the box, you will find a white box which contains the user manual, warranty paper, electric socket which has USB Type-A port, long (appx. 3Meter) power cable with micro USB pin to USB Type-A pin on the other side, a packet of 3 screws with plastic plugs, plastic ceiling/wall mount for the device and sticker diagram for drilling fixing wall mount. Below the white box, is the device EZVIZ C6N.

Connecting and using the product is quite simple. Remove the device, connect the device with the provided long cable which is connected to the electric socket for power. Switch on the electric current and in few secs the EZVIZ C6N switches on with blue light blinking. This indicates the device is ready to use/ paring.

The EZVIZ C6N can be used via LAN or wirelessly as per the consumer requirement. For testing, we decided to use a wireless connection. So, downloaded the EZVIZ App from the Google Play Store (also available on Apple App Store) on the smartphone. Switch on the App, create your new account which can be used for all the Ezviz products and devices in future.

There is a step by step procedure to follow on the App, first need to search for the EZVIZ device available around you. Once you find the EZVIZ C6N device, connect but you are not done here, you have to scan the QR Code on the bottom of the device with your smartphone to complete the full connection.

(Make sure you have the EZVIZ device near or close by the wi-fi router for a clear and better connection. (at a distance of 15 feet, I was not getting full Wi-fi signal on the EZVIZ app.)

You can record 1920 x 1080p Full HD video and captures Full HD images too. The camera comes with a smart IR (Infra-Red) camera, so when it is pitch dark, the camera automatically switches on IR mode.

In the IR mode, you can have the motion detection mode on which will capture any movement in the dark even it is the pet. The camera has an 8X zoom which is digital and not optical so the zoom is not very clear.

EZVIZ C6N device comes with a motorized function which means the camera can be panned/tilted with the help of the application on the phone. The camera can do 170-degree horizontal rotation / panning each side which covers 360-degree coverage with a wide-angle lens. The camera can do vertical rotation 55 degrees. In the auto-tracking mode, the camera detects the movement in front of the camera follows the movement and captures the motion alert. This motion alert is also sent to the smartphone app if the alert notification is switched on.

The camera has two-way speak mode. So, you can communicate via the device as it has a mic and a speaker. You can use to speak to the device via your smartphone EZVIZ app.

The device comes with smart tracking/motion detection. Once you switch on the motion detection, your camera moves and follows any movement in the camera zone. The camera will follow the movement or even pets.

(Small issue – If the television is in front of the camera and if there is movement on the screen, then the camera detect it as the movement and alert on the smartphone.)

The camera sends alerts to the smartphone whenever there is a movement in front of the camera, you view live camera view in real-time.

There is sleep mode on the app by which you can switch off the EZVIZ C6N device when it is not required or you don’t want to record anything from the device camera. Also, all the images and video are encrypted as mentioned by the company.

There are 4 options mentioned by EZVIZ for storage

You can also capture images and videos on your smartphone when you click record from your App.

The EZVIZ C6N Smart Night Vision Indoor Wireless IP based Camera is priced at AED 119 and it is available on the online e-commerce stores like Amazon.

The EZVIZ C6N Smart Night Vision Indoor Wireless IP based Camera is the perfect device for the consumer who would want indoor home protection and keep real-time watch while they are away from the house.

With the smart IR camera function and smart motion detection built-in, now you can have home protection in the dark too. The consumer can get an instant alert on their smartphone if there is any movement at home. There is a two-way talk system by which you can deter any unwanted people who have entered your house and warn the consequences too, you can even talk to your children while watching them via the device. It has a Full HD camera which is decent quality for the price. You can also use it as a baby monitor as it has alerts with motion detection

Things which was not interesting was the IR mode snapshot as it was not very clear but can get an idea of the person. The 8X zoom is digital and not optical and image is not very clear. The wi-fi connect was not that strong even having the device around 15 feet near the router. The App allows to capture images and videos on your phone but when press record from the app, you need to have the microSD installed in the device for motion detection to be captured on the device.

Also, if someone switches off the power/ electricity to the socket then the device will switch off as this device doesn’t have any built-in battery backup for even short period of time. Also, you need to put the verification code on the APP which is available below each device, everything the electricity is switch off from the device. (Make sure you have the verification code copied on your smartphone, so you don’t need to remove C6N device to see the code.)

For the price of AED 119, the motorized product is worth the investment for home protection.

Suggestion – Add the microSD card to the device for capture of motion detection when you are not using the APP. 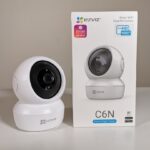