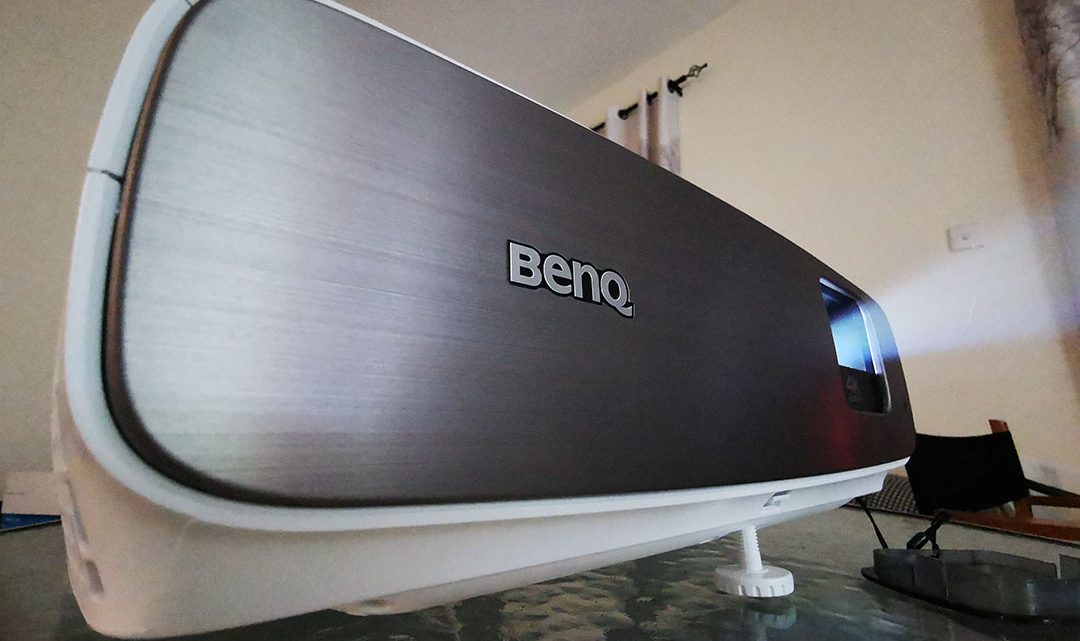 When we talk about the projector, one of the brands always comes in the mind is BenQ. They have been in the market for more than a decade. With all the latest development in digital and technology, BenQ has been providing the latest technology in providing realistic cinema experience at home.

With the recent update from the research companies, BenQ has retained its top spot in the 4K projector market in the Asia Paciﬁc and the Middle East for ﬁve consecutive quarters. With 65.54% market share in Saudi Arabia and 33.76% in UAE in Q1 2019, while leading the market in Japan, India and Thailand, during the same period, BenQ has been leading the race in 4K projector market in the Middle East. As per BenQ, they have a total of ten 4K models with 4 laser models within the 4K range, amplifying the brand’s leadership position in the 4K segment. 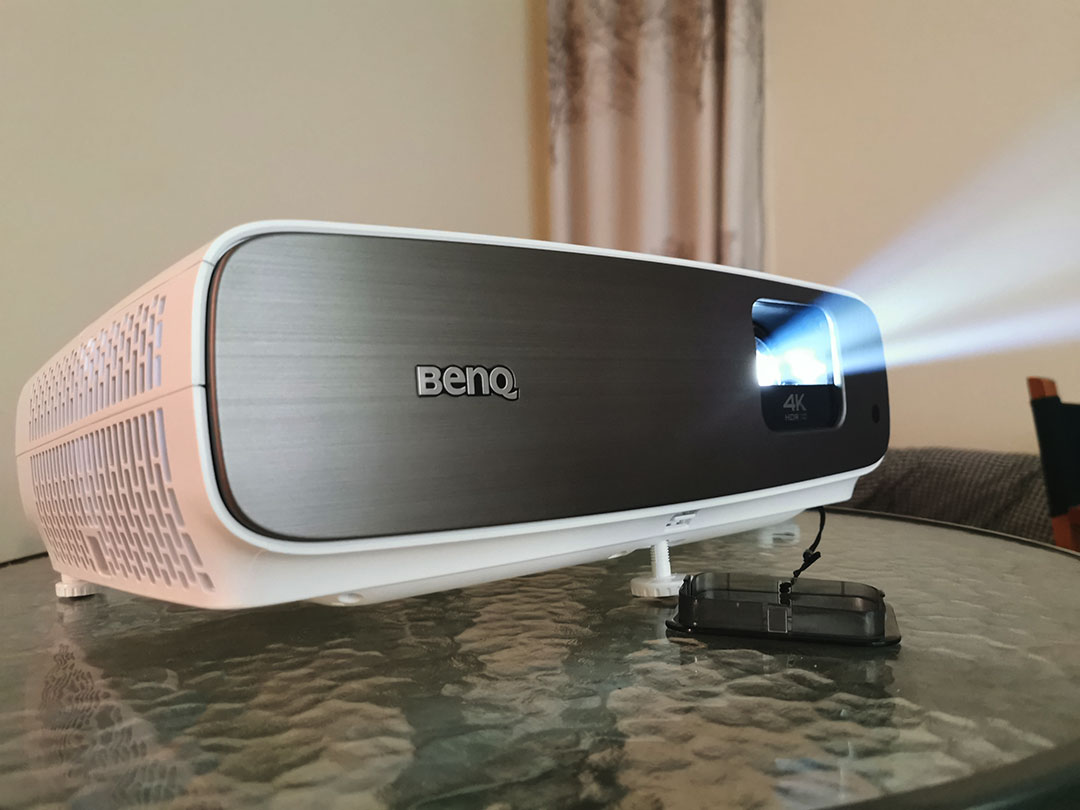 On 24th April 2019, BenQ unveiled the two 4K UHD projectors for the Middle East market – W2700 and W5700. The BenQ Middle East showed the actual working of the projector at the Aloft Hotel’s cinema theatre. The BenQ PR team send me the BenQ W2700 projector for review which is targetted for more for consumers who would want to have true 4K projector for their plush home and possible indoor theatre in their house. 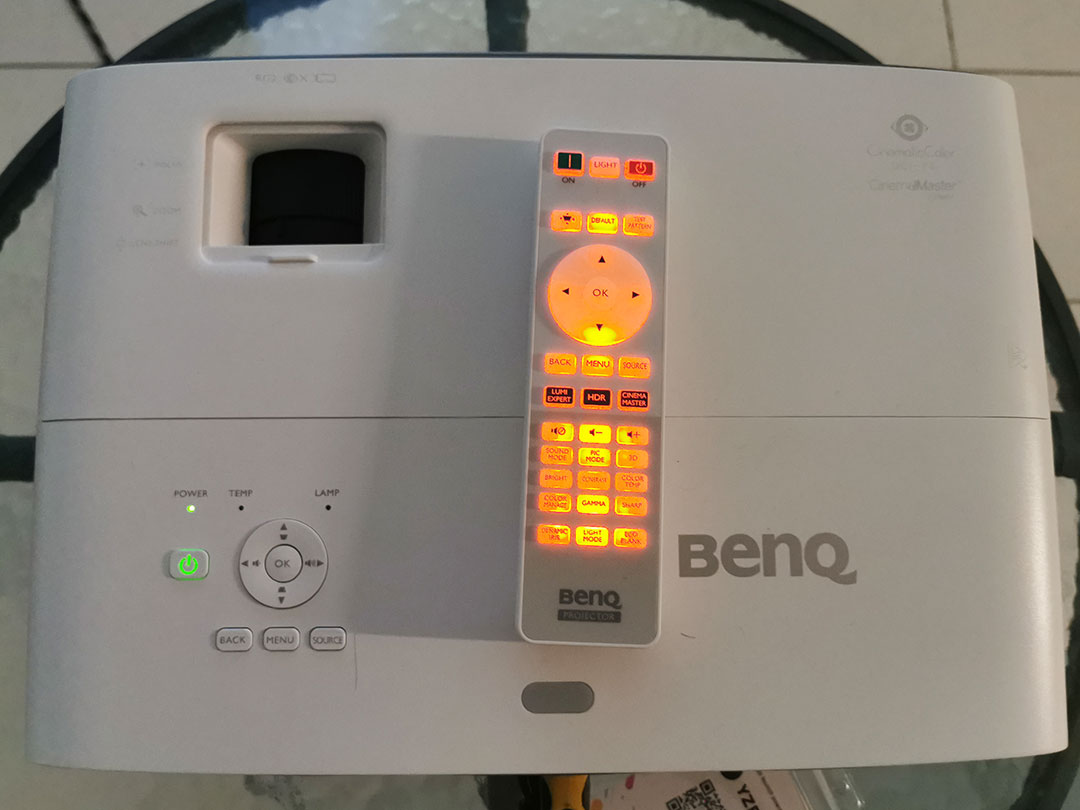 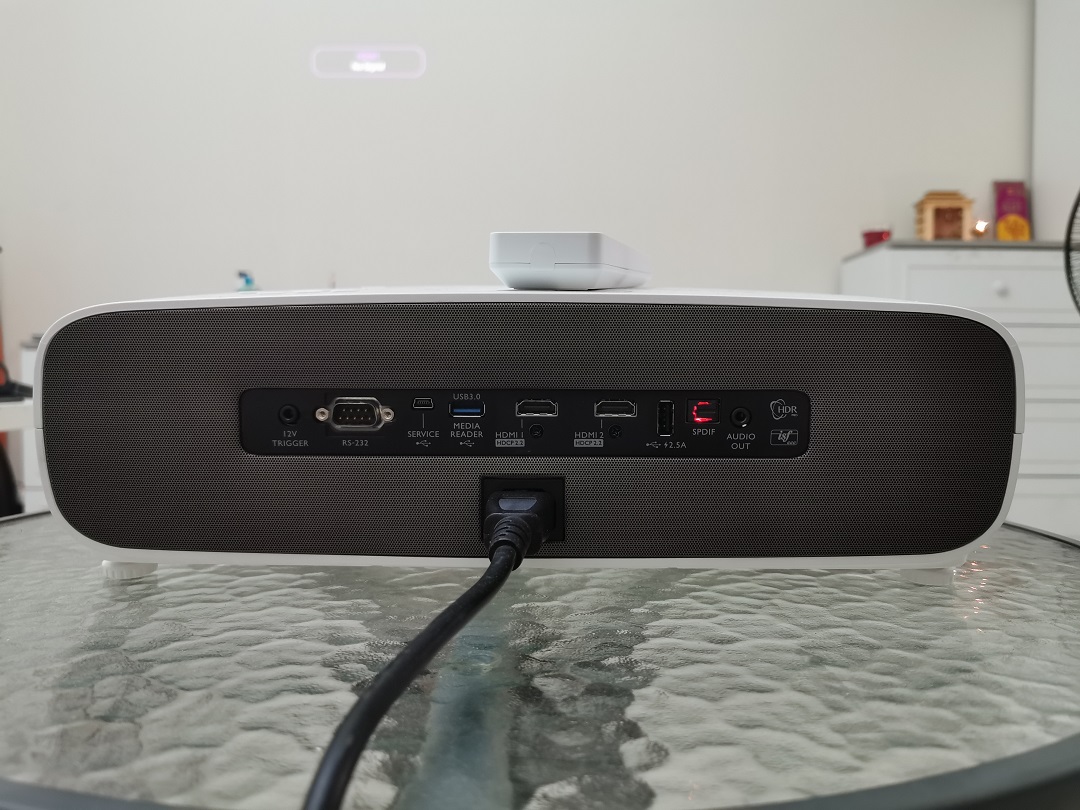 it comes with built-in 5w x 2 speakers which are quite good for close-range view movies or office presentations but off course to enjoy the 4K UDH movies would suggest external sound system. The back panel is curvaceous, perforated speaker grille with the inputs panel in the centre. 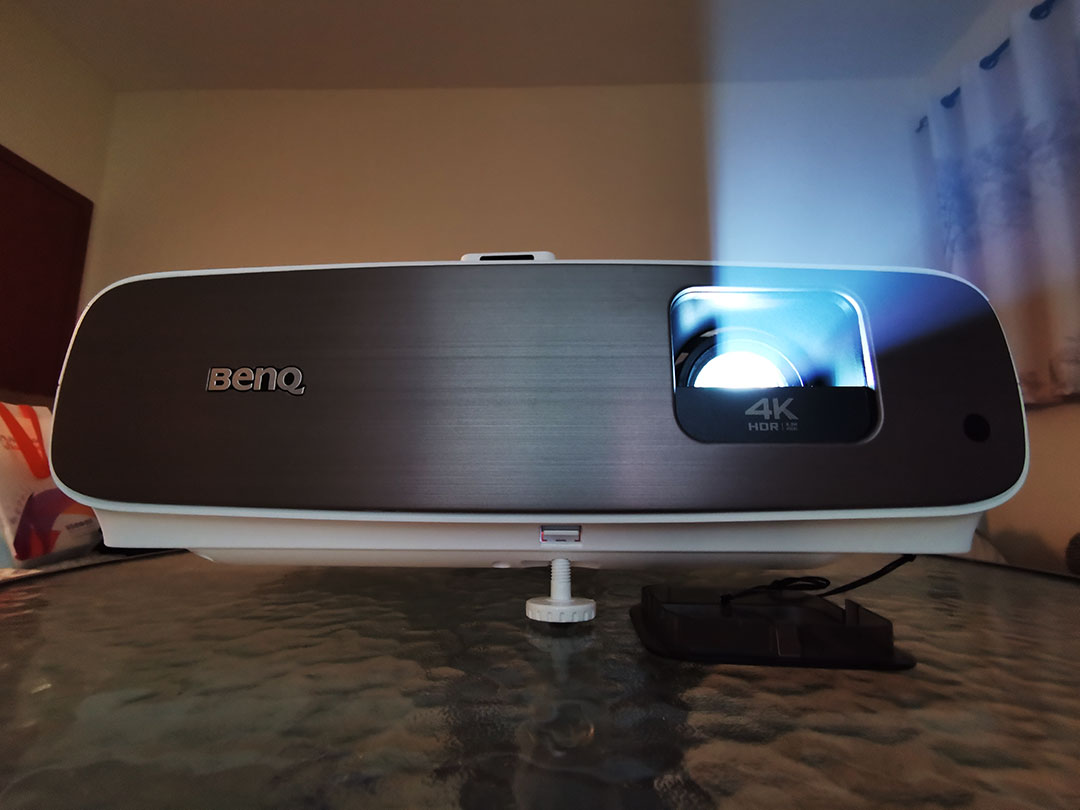 The Benq W2700 box is smaller than the W5700 projector perfect for home but with the capabilities, size doesn’t matter. It is ideally designed for a fixed place set up which has to have fairly generous table or counter space ready in the viewing room. It wider in design, so don’t need too much of depth place to keep it. The matt white curved body design with metallic front makes the projector look classy and but would prefer black colour cover. The vents are both the sides with the cooling fan on the right-hand side and the control panel on the top and input interface on the back panel.

The boot-up time from switch on to the appearance of the BenQ logo is around 38 secs and the fully ready bright lamp is around 1:10secs. The cooling fan is quite silent compared to other projectors I have reviewed.
As this product had come for review, I had placed the W2700 on the table and got it projected on the white wall. It has single centred front screw stand with a release button to raise at least 2inches from the table at least giving 20-degree angle up from a straight line. 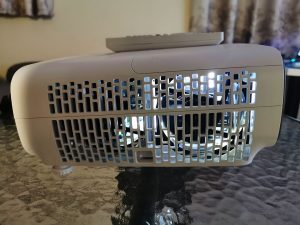 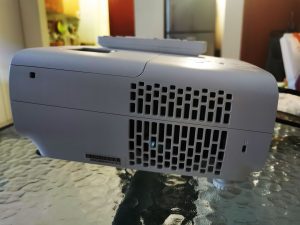 So if you are placing the W2700 on higher pedestal/shelve or above your head like the cinema screening room, the interesting feature in the W2700 is the lens shift option whereas you can shift the lens vertically and Horizontal: ± 10%. 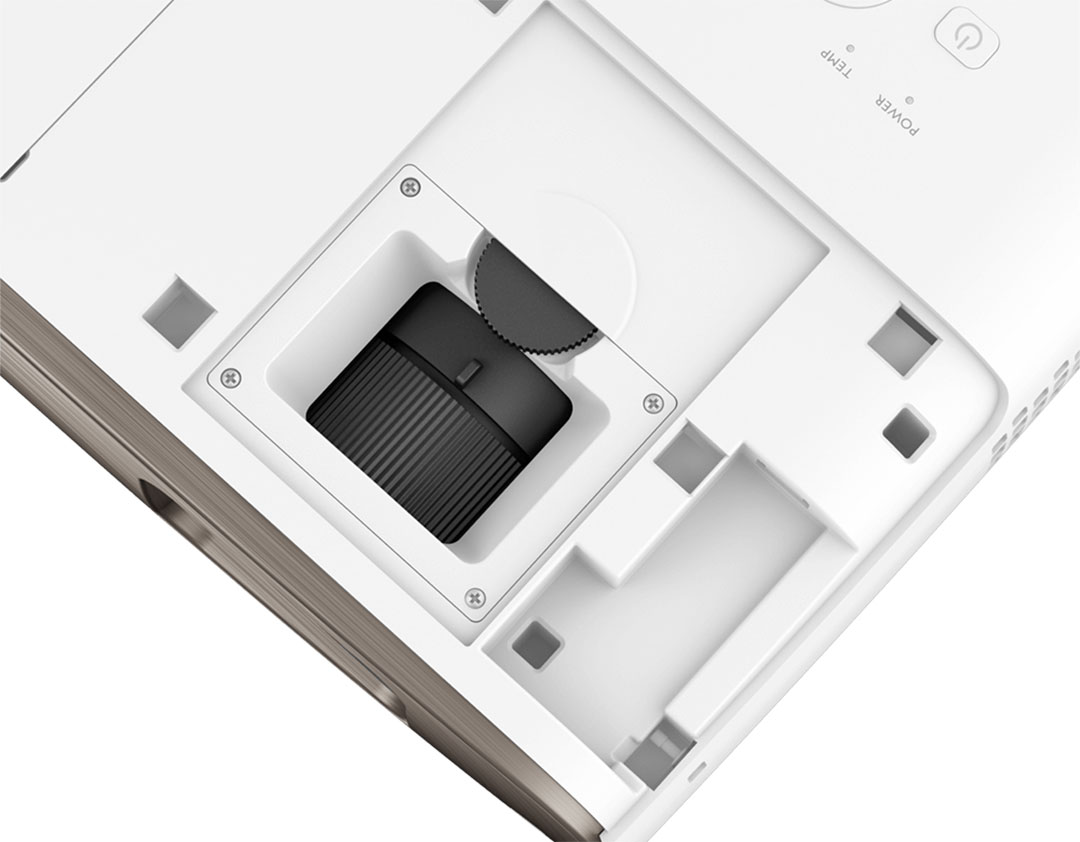 Lens control can be done manually, with a lever on the control panel lens controlling zoom.
The W2700 does offer keystone adjustment. However, it shouldn’t be required with the range of lens controls. Keystone digitally manipulates the image and in the process, softens it. The W2700 is a single-chip DLP projector, there’s no need for panel alignment- align the image correctly to your screen, focus it using the inbuilt test pattern.

Another interesting fact which I liked in the packaging, it comes with a letter from BenQ factory mentioning that each of the W2700 projectors is individually colour calibrated at the factory, making sure that you receive something that’s going to give you the best possible picture right out of the box.
For the consumer who is very particular about colour and calibration while setting up the unit, there is always the option of colour test pattern which you can switch on from the setting or from the remote and set it up as per your preferences. 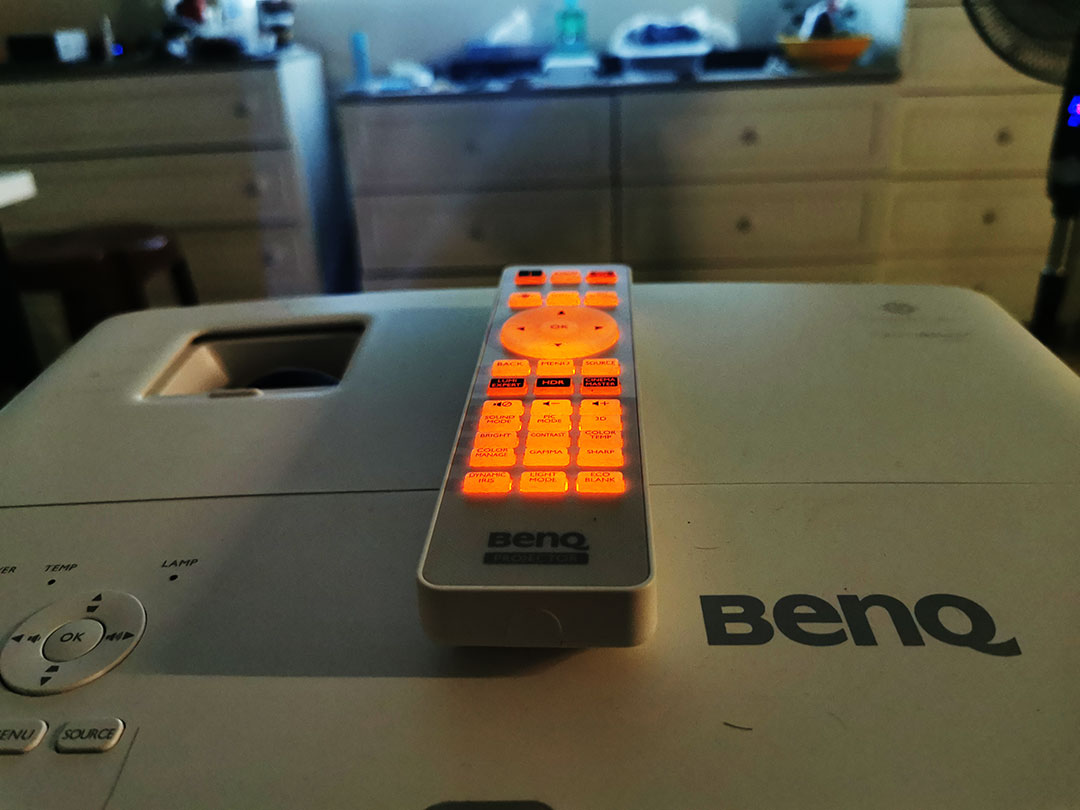 As mentioned by BenQ, the resolution of the projector is “True 4K” a native resolution of 3840 x 2160. In reality, there’s only a handful of projectors include a brand like Sony and JVC’s new range of 4K projectors that offer full 4096 × 2160 4K resolution used more commonly associated with cinemas. The W2700 shares the same resolution used by today’s televisions and specified as the standard by the UHD alliance for 4K. The fact that the W2700 is a DLP projector with 8.3 million pixels joined together to give you the visuals that you see, and that means extreme detailing.
The other thing which I liked while using the W2700 compared to other projectors I have reviewed; it doesn’t have the rainbow effect. Like all DLP projectors, the W2700 can create extremely film-like images, which many are going to favour over the more digital clean look provided by other technologies. The downside of this technology, however, is that it can cause the Rainbow Effect. With the W2700, I didn’t witness any instances of Rainbow Effect (RBE).
The chip doesn’t actually carry 3840 x 2160 individual mirrors, and so doesn’t deliver 4K in the same way that, say, Sony’s native 4K SXRD projectors. Instead, it “flashes” each mirror multiple times per frame of the image to deliver what appears to your eye as a single 4K image. It uses fractionally shifts those pixels four times per frame to produce the appearance of a 4K image. So sometime you may see a half screen when booting the projector as I have experienced during my review. 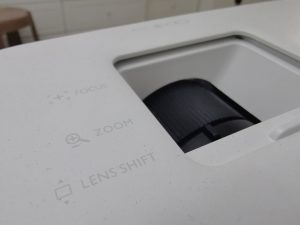 A flap on the top slides open to provide access to zoom and focus wheels. Also tucked under this flap, above the lens barrel, is a vertical optical image-shift wheel. A neat selection of control buttons can be found along the top edge too, should you misplace the remote control.
Interesting design touch is the little black cover emblazoned with a 4K logo sitting over the bottom half or so of the recessed lens. This is present to stop light from the lens reflecting off your table or ceiling.

The Backlit remote makes a difference 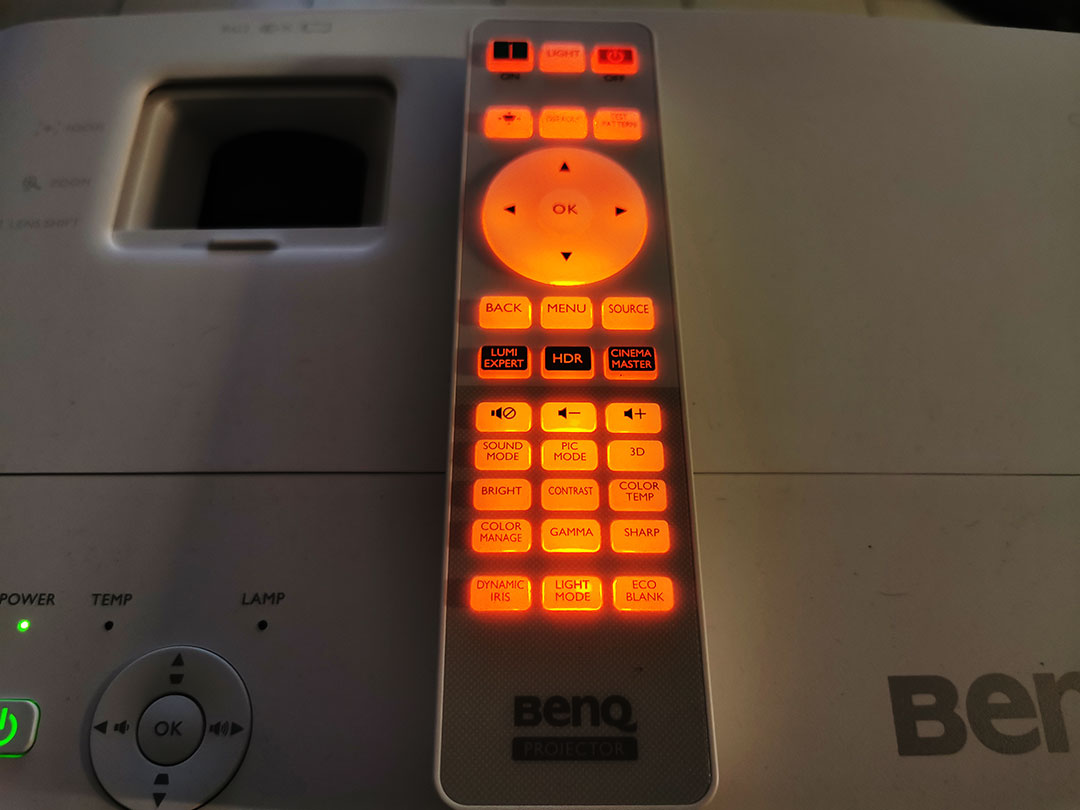 The remote control of W2700 has backlit buttons which are very cool as I didn’t have to struggle to look at the buttons on the remote and I could change things to my preference in the dark without switching the room light. The remote control is responsive and gives all the necessary requirement which are also present on the top panel of the W2700. 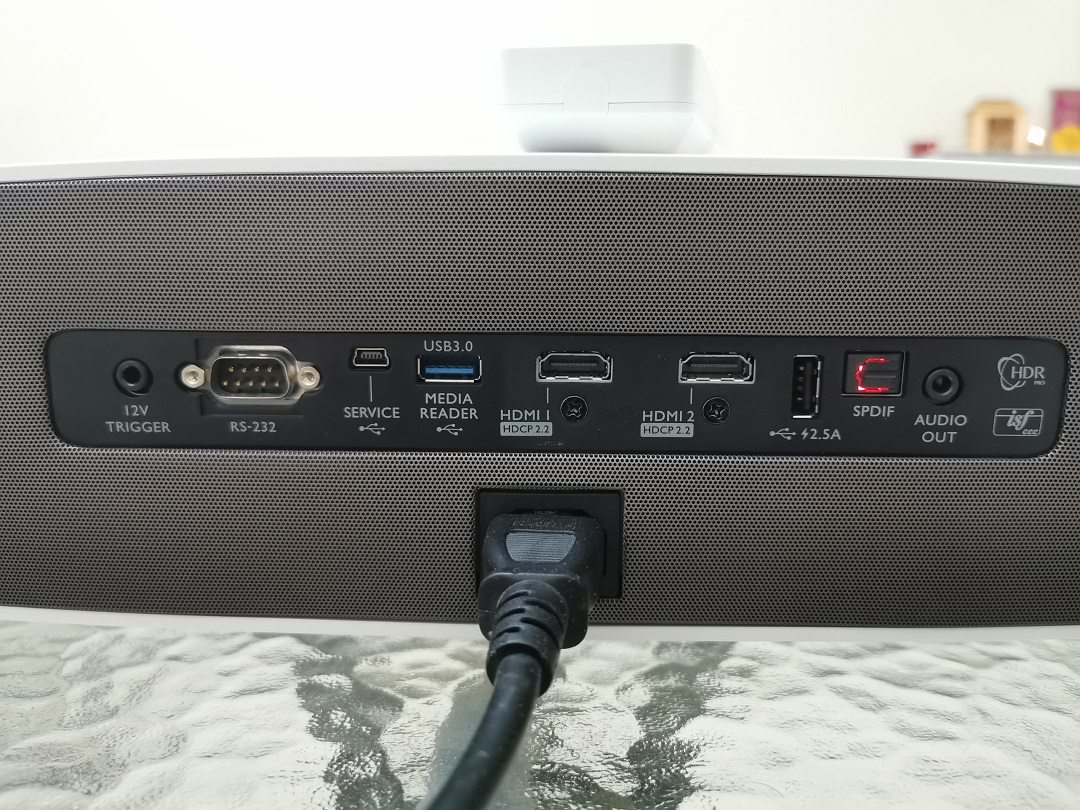 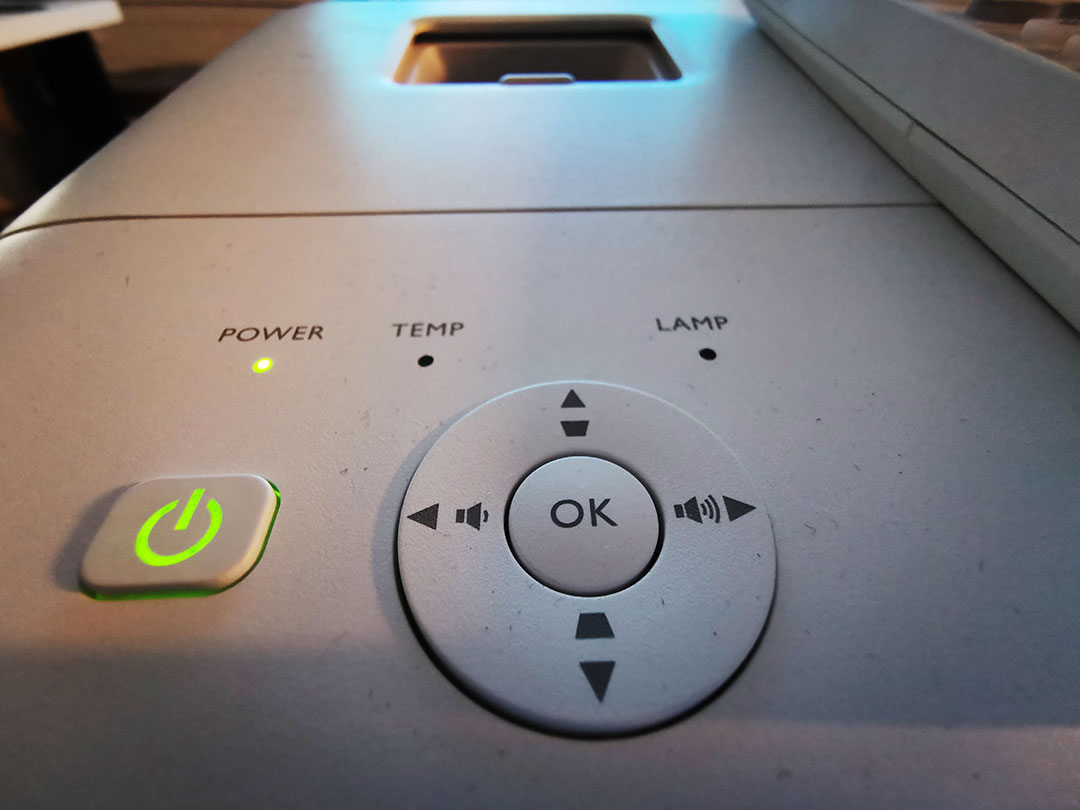 W2700 can produce “True 4K” UHD resolution and images are sharp, bright and pleasing to the eye. Even watching continuous back to back 3 movies, there was no tiredness in my eye. However, after a period of 5-6 hours, the W2700 went blank for few minutes as I assume, the DLP lamp needed to cool down maybe, but giving rest for few minutes, it was working like a horse. I even tried to view some movies during daylight (I don’t have dark curtains to avoid sunlight) and with 2000 lumens, it was not bad and had a quite good viewing experience.

W2700 Projector cost $1659 and so it is not a product for the masses. The consumers who are crazy about cinematic movie viewing at home surely should look at this projector. The people who are investing in this projector, I assume they have a very good sound system to complement this projector.
People who are into film production, ad agencies who need to view the advts and films to show to their clients in actual quality and colours. Corporate offices, who have a big conference room and need to have a sharp quality projection of their data, corporate videos. Even hotels could use W2700 projector in the banquet hotels and conference rooms.

Make sure you have 4K HDMI Cable to connect with your devices and enjoy the full experience of “True 4K” as the package doesn’t come with 4K HDMI cable.

Check out the review of BenQ W5700 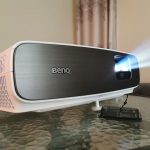