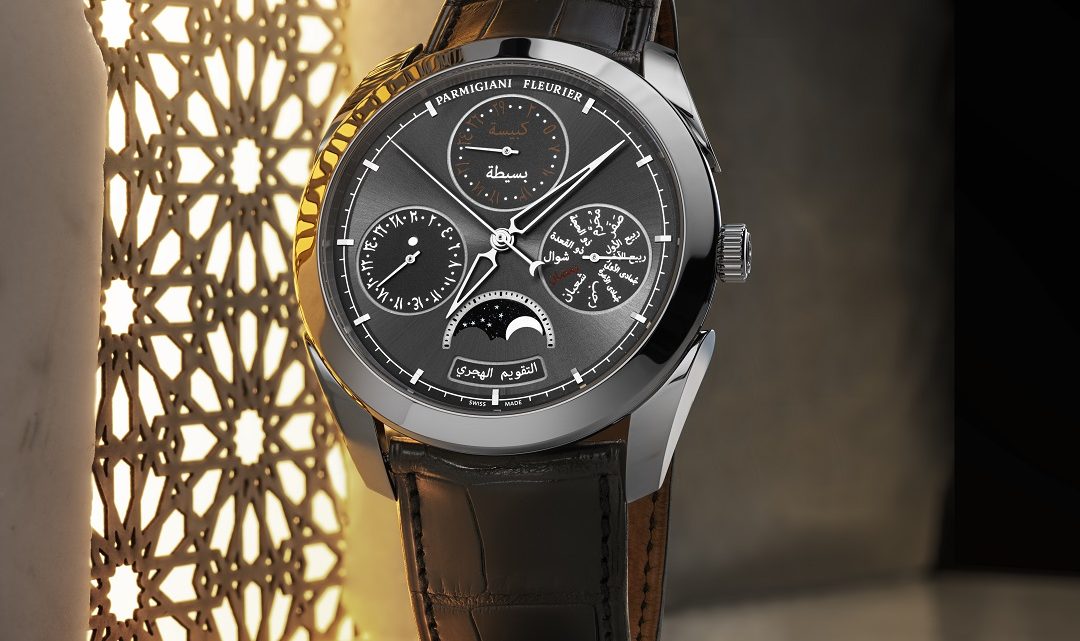 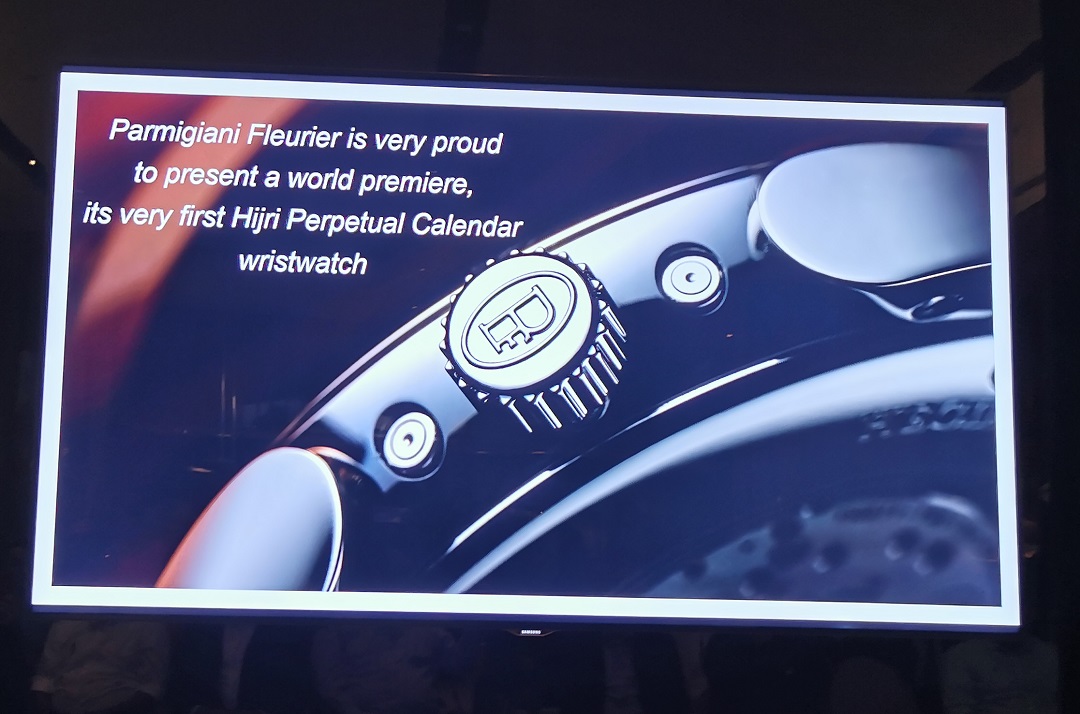 At the launch of Parmigiani Fleurier Hijri Calendar Wristwatch

On Tuesday 17th December, Parmigiani Fleurier, renowned makers of iconic Swiss luxury watches made Haute horological history in Dubai, with the world premiere of its first wristwatch using the Islamic Hijri Perpetual Calendar. The iconic marvel of fine watchmaking design and innovative engineering was presented to an exclusive audience of VIPs, fine watch aficionados, collectors and members of the media at a glittering function at the Four Seasons Hotel in the Dubai International Financial Centre. 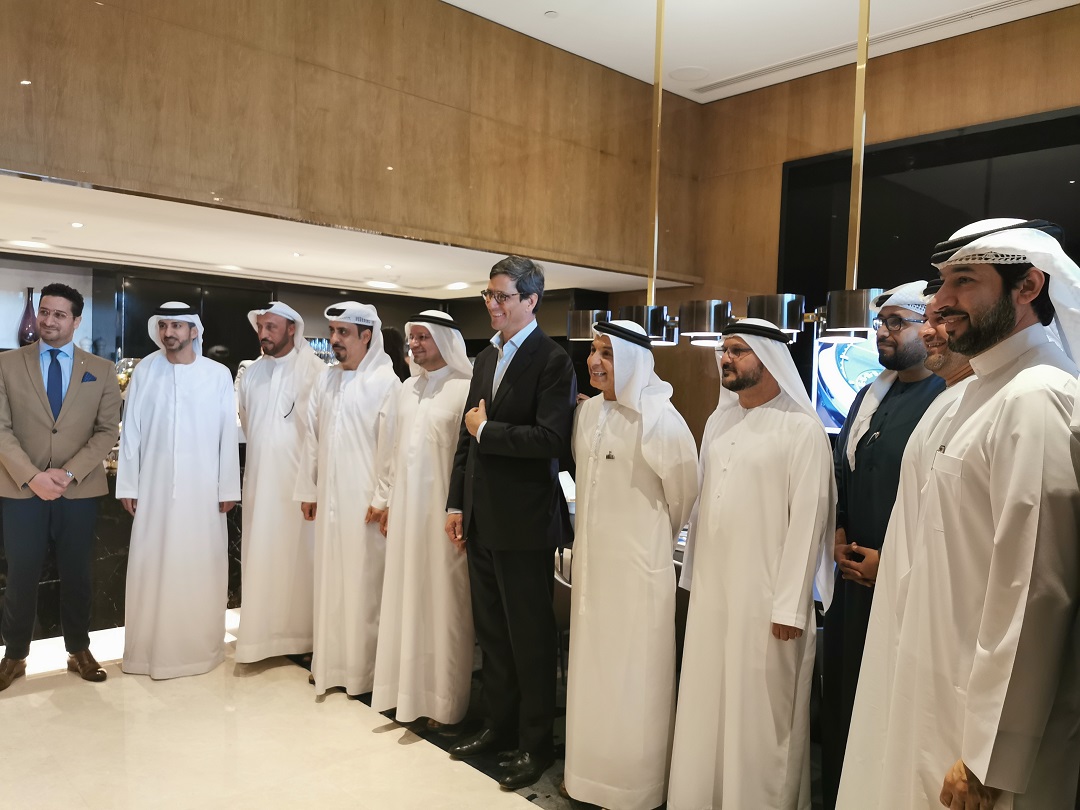 Davide Traxler, CEO of Parmigiani Fleurier with dignitary from UAE and OMAN

In the presence of dignitary from UAE and OMAN, the CEO of Parmigiani Fleurier unveiled the Hijri Perpetual Calendar watch. And describing the details of the material used like Polished Platinum, anti-reflective sapphire glass on the front and sapphire glass on the back. Dial made with brush brass metal and strap made of Hermès Black alligator strap and avoided any gold on the watch. 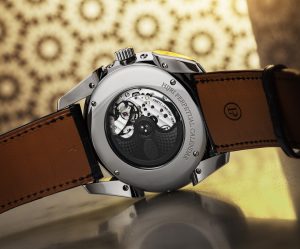 It was also mentioned the watch would be limited collection watch with only manufacturing only 20 pieces and would be available with customization as per customer’s preference which can be adding precious stones or color or styling.

As mentioned by the CEO at the launch, the watch would be available around the end of the 1st quarter of 2020. As the watch is a very exclusive limited collection. The interested customers can get in touch with their partner DAMAS in UAE. 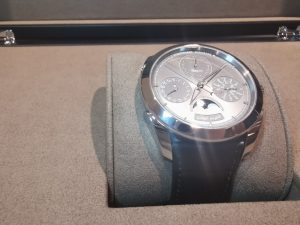 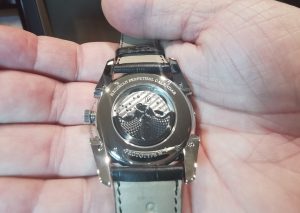 How was the idea generated about Hijri Perpetual Calendar watch? 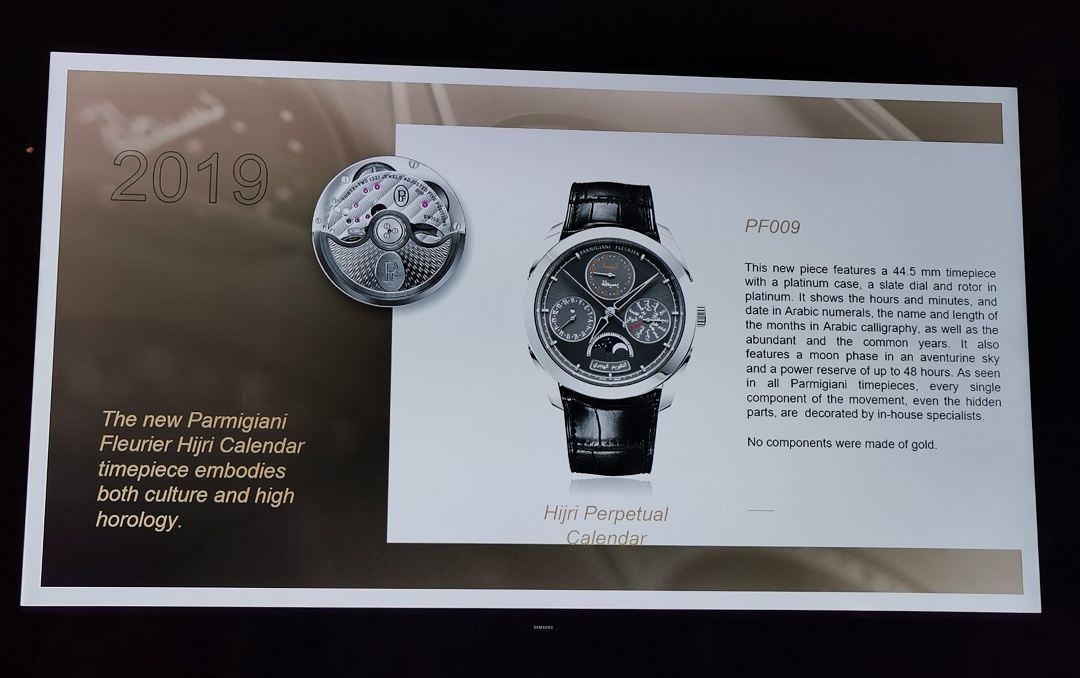 This was the inspiration for developing a wristwatch that features the Hijri Perpetual Calendar. The team developed the watch with consulting with Islamic scholars to create first of it’s kind of wristwatch in the world.

The watch’s calendar is based on the proprietary technology Parmigiani Fleurier first developed for an exclusive table clock that featured the Islamic Lunar Calendar in 2011 and the restoration of a pocket watch featuring an Arabic calendar. 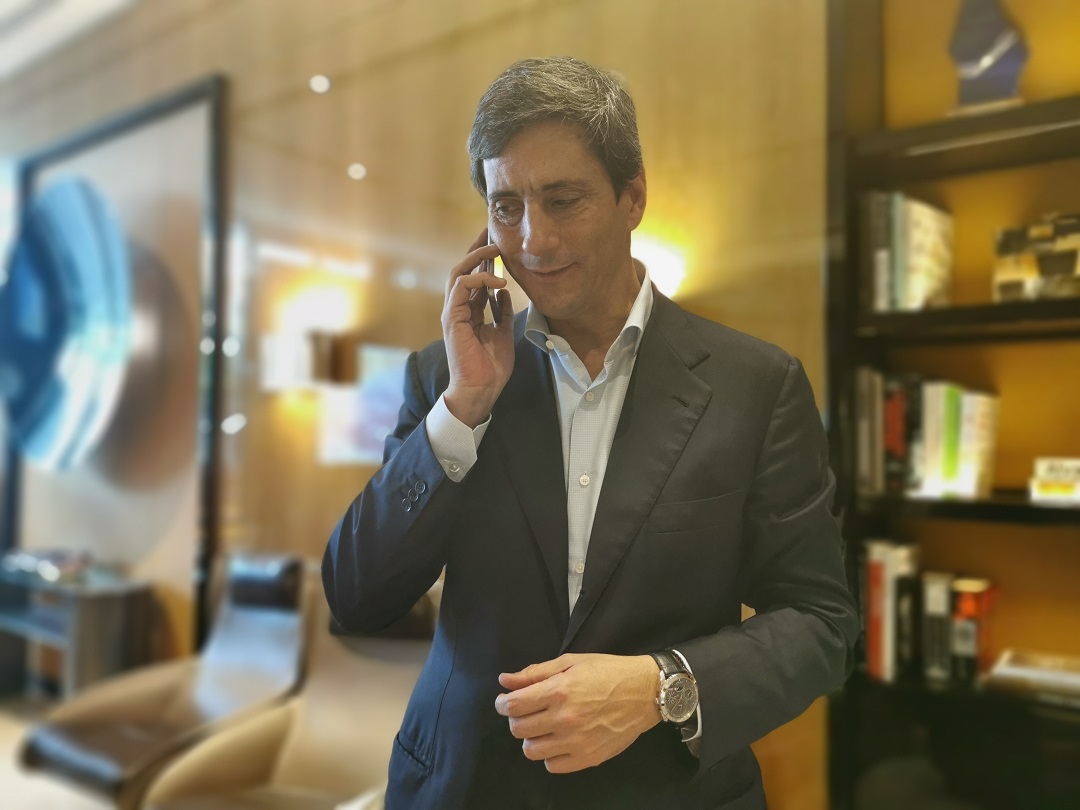 “This is a truly path-breaking achievement and we are proud to unveil the first-ever wristwatch featuring the Hijri Perpetual Calendar from our manufacture and at this venue in Dubai, the business, commercial and enterprise hub of the wider Middle East region,” said Davide Traxler, CEO of Parmigiani Fleurier. “At Parmigiani Fleurier, we specialize in achieving the impossible and our master craftsmen and fine watch designers have outdone themselves by being able to appropriately re-engineer, re-imagine and reinterpret the intricate movements that powered the very first table clock that featured the Islamic Lunar Calendar into the innovative wristwatch that we see here today.”

The Islamic Calendar is based on the cycles of the moon with the Hijri Year being made up of twelve months of 29 or 30 days – depending on the moon phase. In contrast to the solar calendar, which is used in the west, the months of the lunar calendar change annually by a difference of -10 to -12 days. As a result, each month always falls in a different season and therefore varies from the Gregorian Calendar.

The starting point of Islamic time calculations is the ‘Hijri’ or journey of the Prophet Muhammad (PBUH), from Mecca to Medina in present-day Saudi Arabia in the year 622, which was also the year the first Muslim community was founded.

The Hijri Perpetual Calendar wristwatch is presented as a 44.5 mm timepiece with a platinum case and a slate dial. This new watch shows the hours and minutes, date in Arabic numerals, the name and length of the months in Arabic calligraphy, the abundant and the common years. It also features a moon phase in an aventurine sky and a power reserve of up to 48 hours. As seen in all Parmigiani Fleurier timepieces, every single component of the movement, even the hidden parts, are also decorated by in-house specialists. In addition, it features a rotor in platinum. No components in this watch are made of gold. 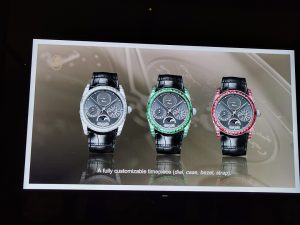 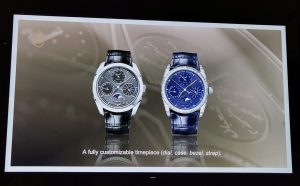 Every detail has been thought of and this stunning timepiece includes Arabic architecture inspired elements- the bridges adopt the shape of growing and shrinking crescent moons and the Rub al Hizb, an Islamic symbol represented by two overlapping squares.

The aesthetic of the Hijri Perpetual Calendar wristwatch is inspired by the purest artistic elements and follows timeless codes often seen in Parmigiani Fleurier collections. The shape of the lugs remains faithful to the brand’s ethos, designed to be ergonomic and comfortable on the wrist. This timepiece is also fitted with a black Hermès alligator strap with a pin buckle. As is usual with Parmigiani Fleurier’s iconic creations, further customization of the model is possible in order to create a one-of-a-kind timepiece. 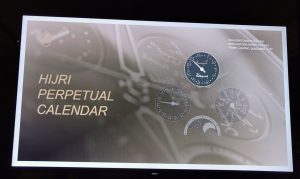 At the launch of Parmigiani Fleurier Hijri Calendar Wristwatch-Year Counter 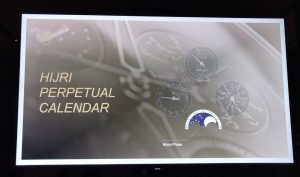 At the launch of Parmigiani Fleurier Hijri Calendar Wristwatch-Moon Phase 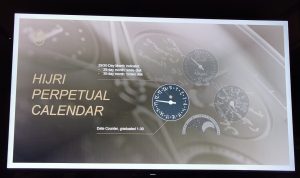 At the launch of Parmigiani Fleurier Hijri Calendar Wristwatch-Data Counter 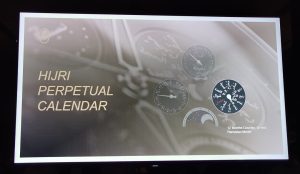 The original development of the timepiece dates back to 1993 with the restoration of a pocket watch by Michel Parmigiani, three years before the creation of the Parmigiani Fleurier brand. This led Mr. Parmigiani to the creation of a table clock featuring a Hijri Calendar in 2011- a world’s first as no lunar calendar had ever been designed to operate continuously. This piece of exception was inspired by his work restoring a simple Hijri Calendar. He also worked on a pocket watch dating back to the end of the 18th or beginning of the 19th Century, which featured a solar calendar translated into Arabic.

The new Parmigiani Fleurier Hijri Calendar timepiece embodies both culture and high horology, and beautifully showcases the high standards in innovation and hand-crafted expertise the Maison is renowned for.

Taking its name from its founder, watchmaker, and restorer Michel Parmigiani, the fine watchmaking brand was founded in 1996 in Fleurier, in the Swiss valley of Val-de-Travers. With its own watchmaking center ensuring its independence, the brand has both full control over the production process and unique creative freedom. For over twenty years, the Parmigiani Fleurier signature has resided within timepieces that command the utmost respect, in harmony with watchmaking traditions. They are the labor of a lifetime – that of Michel Parmigiani, the talented individuals who assist him, and the special relationship between the Manufacture and the masterpieces of the past, enabling it to invent a bold future.