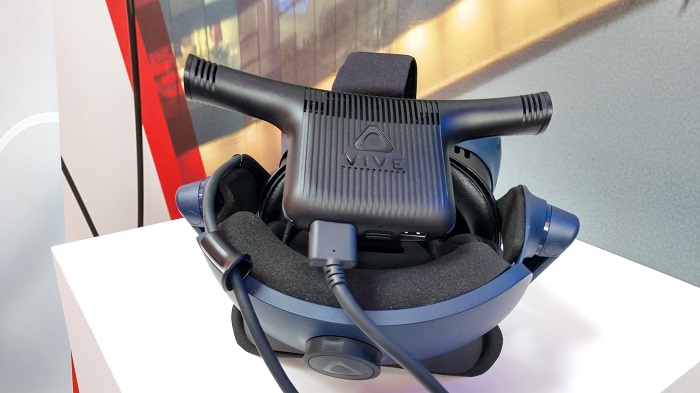 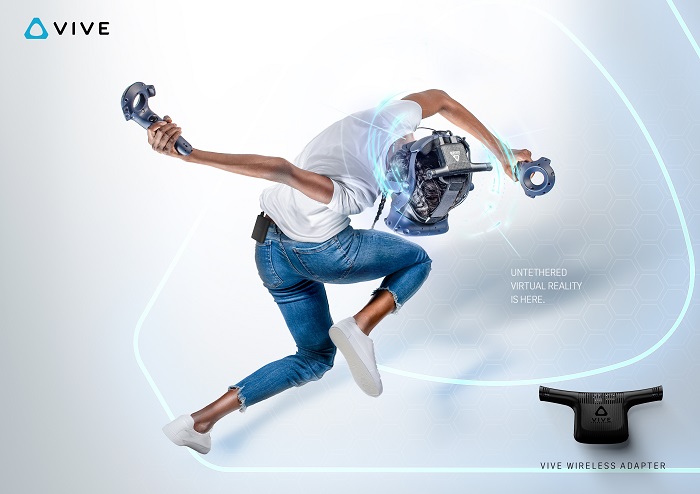 Yesterday, media was invited at the DIC Hub Zone in GITEX Yech Week for showcasing the latest development in Wireless technology for VR. HTC Vive™— the global leader in Virtual Reality (VR) innovation and design—has set the stage for the next major revolution in premium VR applications by bringing more immersive experiences to enterprises and consumers across the Middle East.

During this week’s GITEX Technology Week 2018, the company confirmed the local availability of its much-anticipated Vive Wireless Adapter, while also spotlighting the open platforms necessary to allow companies in the region to discover and build VR content. Industry partners including Dubai Internet City also shed light on how VR use cases are expanding beyond gaming into applications in healthcare, education, government, retail and more.

The market for VR and AR technologies in the Middle East and Africa is expected to increase from a value of $181.59 million in 2017 to a staggering $6 billion in 2020, according to recent estimates from IDC. 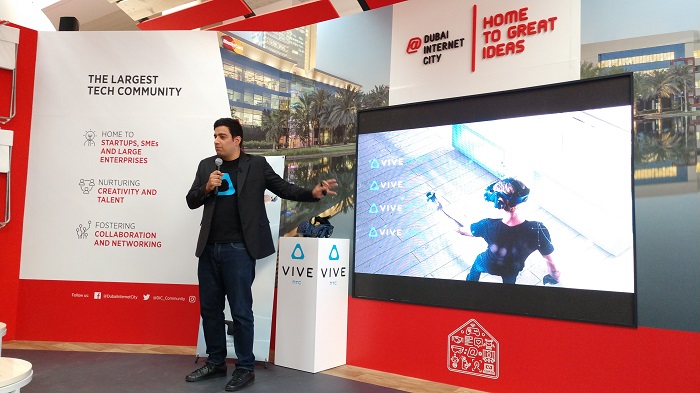 Ramit Harisinghani, VP and head of Middle East & Africa at HTC Vive, said: “The future of virtual reality is happening now, with the convergence of new open platforms and technologies delivering unprecedented experiences for consumers, businesses, and governments. The growth of VR in the coming years will come not only from a mass-market proposition but also with the development of applications from a larger base of developers. Building an ecosystem to test and build new VR concepts is essential, and it is very encouraging to see so many organizations across the region keen to get involved in this journey.” 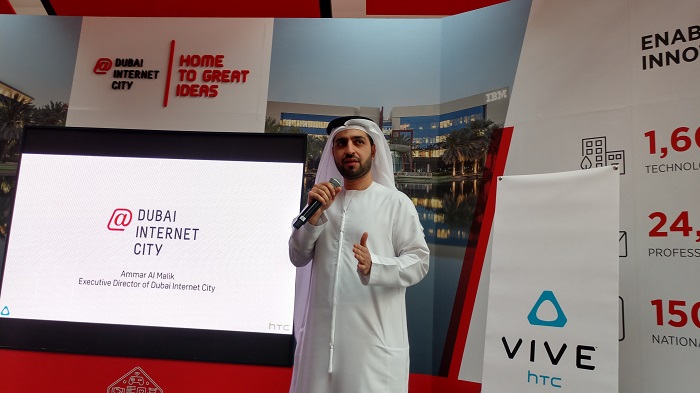 Ammar Al Malik, Executive Director of Dubai Internet City, said: “Our enabling ecosystem brings together enterprises of all sizes and from a wide variety of technology fields to collectively drive progress in the region. The launch of the new HTC Vive Wireless Adapter is a testament to the advancements in the virtual reality arena and creates exciting opportunities for local content developers and for enterprises across a wide range of sectors, “ 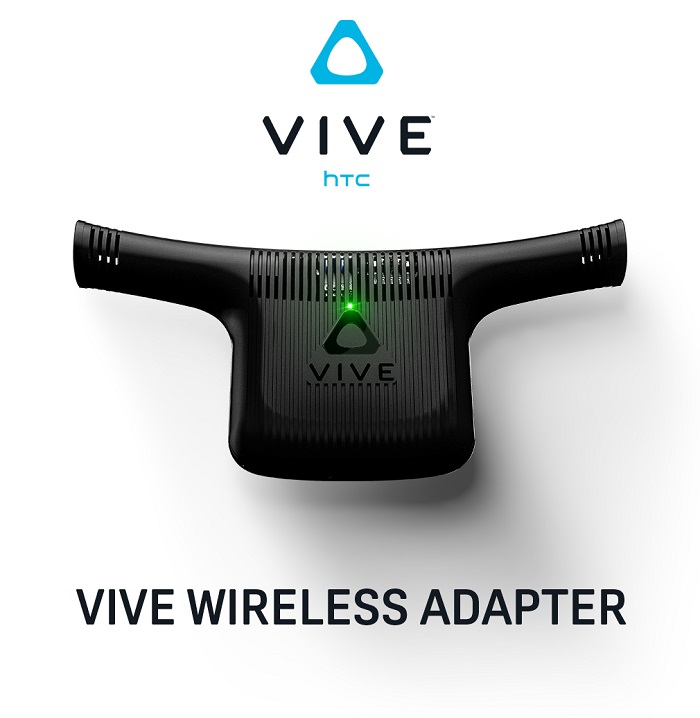 The newly-launched Vive Wireless Adapter was first unveiled to global audiences in August 2018. The adapter enables users of Vive and Vive Pro headsets to move without hindrance and turns multi-user VR into an actuality.

Powered by Intel® WiGig, the Vive Wireless Adapter delivers a near-zero latency VR experience that’s fast, responsive and offers maximum performance. Build worlds, tear them down, venture into the unknown—all without skipping a beat. It’s lightweight and comes with a powerful, easy-swap battery with up to 2.5 hours of power.

The Wireless Adapter for HTC Vive 1.5 will be available for AED/ SAR 1,349, while for the HTC VIVE Pro, the wireless experience would require the wireless adaptor for HTC VIVE 1.5 and an add-on Wireless Adapter which is priced at AED/SAR 299. Both the Adapters will be available at select retail outlets across the UAE and Saudi Arabia by end of December 2018. These will also available through the company’s dedicated Middle East e-commerce store, www.vive.com

In addition to hardware, HTC Vive has continued to invest in its Viveport store, offering one of the widest ranges of VR experiences that inspire people to discover, create, connect, and even shop in VR. Today Viveport showcases a growing portfolio of hundreds of VR experiences across a wide variety of content categories. Building on its commitment to open platforms, HTC Vive also recently began distributing content compatible with Oculus Rift through Viveport and as part of Viveport subscriptions. 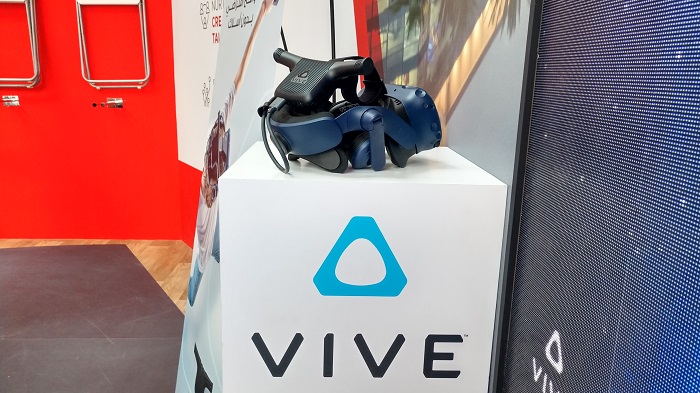 HTC Vive has also refined its tools for developers so that they can quickly access Viveport on the Vive system, on web browsers, and on mobile apps. The company now works with developers to create commercial models for their applications, allowing developers entering into the VR realm to scale their ideas quickly to a global audience.

One of the most popular local content titles has been Mission 828, simulating the experience of scaling the 828 meters of the Burj Khalifa to the top of the spire. Visitors to GITEX 2018 can live the Mission 828 experience firsthand using the new Vive Wireless Adapter, with Burj Khalifa the first organization in the region to integrate the adapter into its permanent attraction on it’s At the Top observation deck.

Visitors can experience the latest in virtual reality with HTC Vive during GITEX at the Dubai Internet City stand, CC2-6 in Concourse 2, until October 18, 2018.