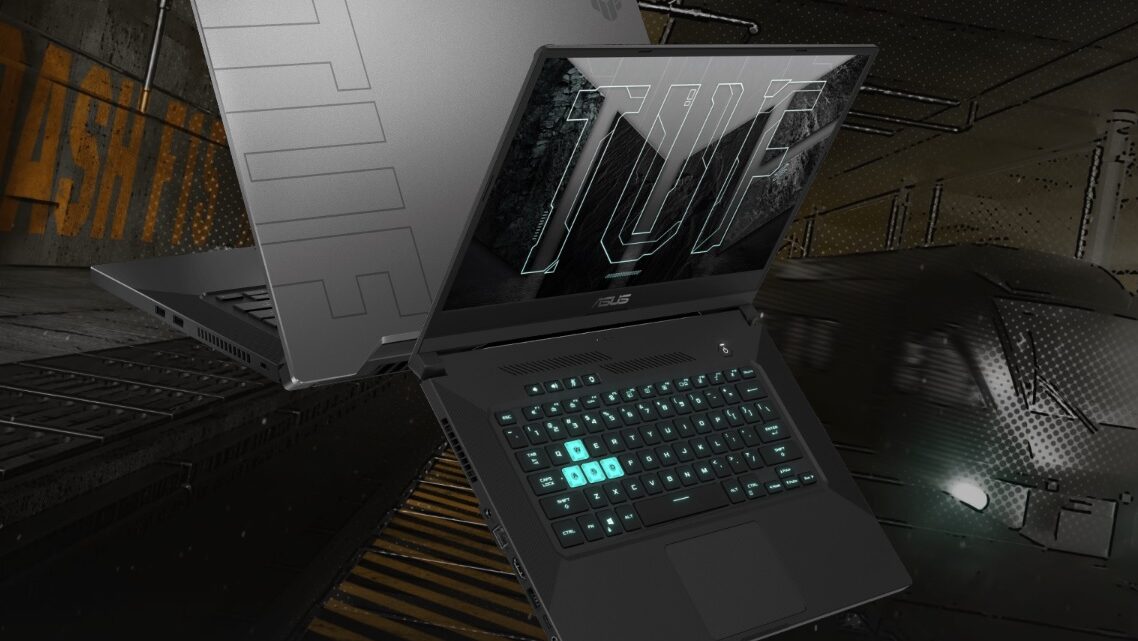 Its powerful core experience is rounded out with high-end features not typically seen at accessible price points, such as a tournament-level gaming panel with up to a 144Hz refresh rate, a versatile Thunderbolt 4 port, and Two-Way AI Noise Cancelation technology. Gamers can be productive longer on the go thanks to an expansive battery that nets up to 16.6 hours of video playback and Type-C charging that extends battery life from a variety of adapters and power packs. The TUF Dash F15 fits all of these features in a chassis that is stylish without sacrificing the TUF Gaming series’ signature military-grade durability.

The all-new TUF Dash F15 is lighter and thinner than standard TUF Gaming laptops, at only 19.9 mm thin and 2kg (4.4 lb), while still meeting MIL-STD-810H military standards. It has been rigorously tested to survive everything from extreme environments and ambient vibration to accidental knocks and bumps, making it a device that’s reliable to take on the road.
Because it represents such a new direction for TUF Gaming, the Dash F15 was designed with a streamlined new look and feel. The Eclipse Gray colour scheme is professional and understated, accentuated by bolt blue backlighting on the keyboard. The refreshed TUF logo boasts a modern look that evokes the strength of the series, while the thin lettering across the lid underscores the slim new design direction.

Users can do more than game with up to the latest 11th Gen Intel Core i7-11370H processor. The CPU clocks up to an astounding 4.8 GHz, nearly matching the frequency of the fastest desktop processors, but in a much smaller power envelope – up to 35W of sustained power when the GPU is active and 64W when the CPU is on its own – enabling amazing performance in a thin chassis. It also features four lanes of CPU-attached PCI Gen 4 for high bandwidth to connect the latest discrete graphics. The Dash F15 is the fastest 11th Gen Intel Core-powered laptops available to date, accelerating everything from gaming and streaming to intensive tasks like compiling code.

Intel shares the ROG vision of powerful ultraslim gaming laptops that let users work and play in more places. The TUF Dash is a result of close collaboration with the fine-tuned performance that allows the processor to reaches its full potential and also sustain high speed while gaming.
Room for 16 GB of DDR4-3200 memory means there’s enough RAM for productive multitasking and content creation. Everything loads at warp speed thanks to a PCI Express SSD that makes systems feel more responsive. 512GB of space holds a massive collection of games, while an additional SSD slot makes it easy to add terabytes of extra capacity for massive multimedia files and more.

The Dash F15 features an easy-upgrade design that puts the SO-DIMM slot and both M.2 slots just behind the bottom panel, held in place with standard Philips screws. A special pop-open screw pushes the bottom corner away from the chassis so it’s easy to get under the hood fast. The surrounding hooks holding the edges together are smaller and stronger than conventional counterparts, making it easy to lift off the panel without scuffing the body or special tools.

Graphics power is assured with up to a GeForce RTX 3070 GPU clocked up to 1390 MHz at 80W with ROG Boost, allowing it to pump out massive frame rates in the latest blockbuster games and popular esports titles alike.
Built on NVIDIA’s latest Ampere architecture, this all-new GPU blends traditional CUDA processing cores with 2nd generation RT and 3rd generation Tensor cores to accelerate ray tracing and artificial intelligence. This combination of cores enables realistic in-game lighting and effects, and it also speeds up other computationally intensive work like AI deep learning.

A powerful GPU puts triple-digit FPS within reach in popular games, but a fast display is essential to get the full effect. A gaming panel with 144 Hz display that still offers competitive gaming speed, more than doubling the refresh rate of conventional laptop displays. Its panel maintains colours and contrast across wide viewing angles, so you can set off to the side while playing games or streaming videos with friends.
Adaptive-Sync support across all display options enables ultra-smooth gameplay by synchronizing the refresh rate with the GPU’s frame rate, reducing lag, minimizing stuttering, and eliminating visual tearing. The display is framed by 6.2 mm super-narrow bezels that minimize distractions from the action. The slim border shrinks the footprint of the chassis, too, making the laptop more compact.

Working anywhere is more flexible with ample battery life. Up to 16.6 hours of continuous video playback time means gamers can stream or take care of other tasks without tethering themselves to an outlet. When a full recharge is needed, new fast-charging technology takes the battery from 0% to 50% in under 30 minutes. Battery life can be extended even further with Type-C charging support that can top off a charge from compatible adapters and power packs.

Type-C adapters up to 100W are supported, meaning users can travel lighter and save the standard AC adapter for gaming or other intensive tasks that need full performance. The Type-C port works with Thunderbolt 4 and USB4, so it connects to the latest generation of premium devices.
Thunderbolt 4 lets users plug in a docking station to drive a desktop setup or hook up an external GPU to boost gaming performance and overall graphics power on demand. The Dash F15 is also equipped with a wide variety of additional ports keep users flexible for any situation.
Three USB 3.2 Type-A ports make room for vital peripherals like a gamepad, mouse, and external storage. HDMI 2.0b can be connected to a wide range of displays at resolutions up to 4K. The Type-C port also doubles as a DisplayPort 1.4 output, making it simple to connect a secondary display. Getting online is easy with ultrafast WiFi 6 (802.11ax). It’s hard to beat the convenience of wireless networking, but wired connections have lower latency for serious multiplayer gaming, so Gigabit Ethernet is also included.

Advanced cooling enables the TUF Dash F15 to fit top tier processors in a super slim form factor. A substantial heat spreader and five copper heat pipes distribute thermal energy from the CPU, GPU, VRAM, and VRM into four heatsinks, each lined with thin fins that maximize surface area for heat dissipation and minimize resistance to airflow.
Dual fans channel air through four outlets that expel heat faster and with less noise than typical ultraslim designs. The n-Blade fans are specially sculpted to move more air. They’re made from a special liquid crystal polymer that makes enough space to fit 83 blades per fan and still ensure that each blade is strong enough to hold up at high RPMs. Such a high blade density means each fan can draw and push more air per rotation, cooling components faster. With 0dB Technology, the fans switch off completely when CPU and GPU temperatures drop below 50°C in the Silent operating mode. This makes cooling truly silent under light workloads.
The self-cleaning cooling module maintains long-term stability and performance by preventing build-up on critical components like fan blades and heatsink fins. Updated anti-dust tunnels are shorter to create more space for airflow around the fan, while still redirecting particles away from crucial hardware. Users can take fine-tuned control of the Dash F15 with Scenario Profiles, which can be set to switch seamlessly between three operating modes that mix different cooling and performance profiles.
Turbo mode delivers maximum performance and fan speeds for intensive tasks, while Performance mode optimizes speed and acoustics for the best gaming experience. Silent mode reduces power and noise for lighter loads like web surfing and video streaming. Scenario Profiles can be set to trigger automatically when you launch specific apps and games, and they can also change additional system settings, like the display profile and behaviour of the Windows key.

The TUF Dash F15 is topped off with a range of premium features that enhance its everyday user experience for gaming, entertainment, and more.
Voice chat is crystal clear thanks to new Two-Way AI Noise Cancelation technology. This advanced technology removes a broad range of unwanted background noise from both input and output audio, meaning that both the user’s voice and incoming communications are fuzz-free. It supports any input device, and noise cancelation settings can be applied and adjusted for specific apps, so unwanted sounds can be filtered out of voice chat software without adversely affecting game audio or music apps. Best of all, this technology runs on the CPU, allowing the GPU to focus all its resources on maximizing gaming performance.

A new, quiet keyboard design keeps inputs under 30dB. Commands can be input freely and discreetly no matter where users want to play. Its desktop-style design is optimized for gaming, with four dedicated hotkeys allow for quick access to essential features like volume, mic mute, and Armoury Crate. Function keys are separated in the usual groups to make shortcuts more intuitive, while arrow keys are offset for effortless navigation. The stealthy keyboard switches have a 1.7mm travel distance that makes typing more comfortable.
Entertainment experiences are more immersive with DTS:X Ultra technology that brings 7.1-channel virtual surround sound to stereo headsets or speakers. Users can choose between built-in presets for games, movies, and sports or try customizing their tuning with the embedded equalizer.